Yemen’s Children:  The Hardest Hit in the Current Carnage

In Yemen, it is said that children learn to shoot before they learn how to walk.  The Spartan training of Yemeni men (and now more recently Yemeni women) is as old and historic as ancient civilizations like the Fertile Crescent and some say that of ancient Egypt. 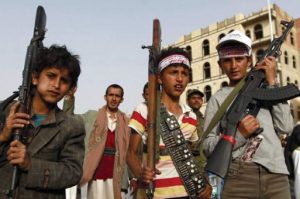 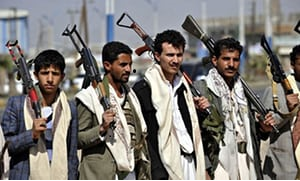 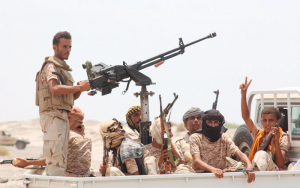 It is even more evident that among the mountain-dwelling tribes of the North, a macho culture exists whereby men of all ages are expected to take part in the defense of their abode and/or country.  Yemen’s strategic location and relative abundance of a favorable climate, as well as rich farmland, make it viable for conquest.  Thus it is not surprising that Yemeni children at relatively small ages can be seen throughout the country brandishing pistols, Kalashnikov AK 47 rifles, not to mention the traditional Jambiya (curved dagger).

Needless to say, Yemen suffers from poverty even before the start of the war, but as it continues, the economic situation can be described as catastrophic.  As a result of the continuous aerial bombardment by the Saudi-led coalition literally, all the civilian and industrial infrastructure in Yemen has been rendered as non-functioning or non-existent.  The numbers are detailed in the Infographic chart below.

The current war with its intertwining complications of various internal and external players had brought forth very hard circumstances to the Yemeni people.  The civilians are the hardest hit by the ongoing aerial bombings.  According to UNICEF in its November monthly report, “A sharp escalation of violence characterized the month of November, with airstrikes on November 1st reportedly causing the death of six children and several other civilians in a market in Sa’ada governorate. The second airstrike on November 3rd reportedly killed a family of seven people, including two children and two women. Indiscriminate shelling of residential areas in Taiz continued, reportedly killing five children”.  The overwhelming majority of civilian casualties according to the United Nations and other human rights organizations are attributed to Saudi-led coalition’s indiscriminate bombings.

On the bombing attacks, the resident head of the Office for Coordination of Human Assistance recently issued a statement demanding to end indiscriminate bombings stating “Initial reports from the Office of the High Commissioner for Human Rights (OHCHR) indicate that on December 26th, airstrikes on a crowded popular market in Al Hayma sub-district in Attazziah district, Taiz Governorate resulted in at least 54 civilians killed, including eight children, and 32 others injured including six children. During the past days, residential areas in Al Hayma villages, including a health unit occupied by Internally Displaced Persons, have been subject to a full blockade by the de facto authorities and indiscriminate shelling that resulted in casualties among the residents and displacement of many families to safer areas.”

Also on December 26th of last year, an airstrike on a farm in Attohayta District, Al Hudaydah Governorate resulted in the killing of 14 people from the same family.  These new victims are in addition to 84 civilian casualties reported in the previous 10 days, including 41 people killed, and 43 people injured by airstrikes in several governorates throughout Yemen.

Because of this OCHA statement,  Saudi-led coalition military spokesman, Turki Al-Maliky lashed out at the UN official, saying, among other thing stating that this is not a part of the Coordinator’s job and he had no business in making such a statement.  In addition, Al-Maliki pointed out that the Houthis are using children in combat and that should be given attention by the United Nations.

Human Rights Watch and UNICEF have criticized both local factions for using children in war.  The newspaper, through ground sources, has also found evidence of both sides using children.

About 20 million Yemenis are suffering from severe famine and badly need relief assistance. Because of the poverty situation in Yemen, it is easy to see why the use of children is not far-fetched in cities like Taiz and the southern governorates because of the shortage of manpower to enlist in the fighting with the so-called national army and the resistance militias.  In the North, it was found that the hereditary desire for soldiering is actually driving many young teenagers to join the Houthis.  I know many parents who complain that they can’t prevent their children from running away and joining the Houthis because there is nothing else to do.  I asked Houthi leaders, why do they recruit children to fight with them.  They insist that no children are ever sent on combat missions to the frontlines and their minimum age is around 15-17 years old.  However, this reporter has seen youth serving in checkpoints and as guards in mosques who search entrants to the mosques and other public places.  They insist all the combatants in the front are 18 years or older.  When asked if they ask for proof of age, they say, many Yemenis who come from remote tribal areas do not know their birthdays.

From the casualty images of dead or wounded soldiers issued by the Houthis there were no children found below the ages of 16 and we were unable to get any reports from the Legitimacy forces allied with the Coalition.

Needless to say, the war has had its hardest impact on Yemeni children with a third of casualties being children.  The nutritional deprivations and inadequate incomes of families have also brought great suffering to the children of Yemen.  The United Nations International Children Emergency Fund (UNICEF) reports that more than 2.2 million Yemeni children have been pushed toward starvation.  UNICEF’s regional director for the Middle East and North Africa, Geert Cappelaere, recently described Yemen as “one of the worst places on earth to be a child.” UNICEF Director states that more than a third of Yemen’s fighters are children.