Safa Al-Ahmad speaks on her work as a Journalist in Yemen.

According to a press release by the University of Michigan, the award goes to “those who demonstrate the capacity of the human spirit to stand up for the helpless, to defend the integrity of the powerless, and to speak out on behalf of the voiceless.”

Director for the Center of Arab American Studies, Professor Sally Howell organized an event that brought Al-Ahmad to a screening of her work at the University of Michigan Dearborn. 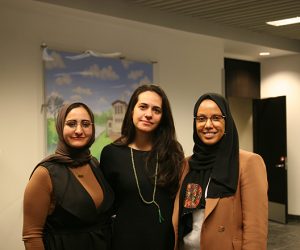 In a public discussion about her work, Safa Al-Ahmad spoke with Hanan Yahya (left) and Dr. Shireen Al-Adeimi (right) at the University of Michigan Dearborn.

“Safa’s works is one the very few sources available to the English-speaking world about what is actually happening on the ground in Yemen,” said Professor Howell. “The Wallenberg medal amplifies her voice to reach well beyond the small slice of observers who already know and care about Yemen.”

According to Wallenberg Committee Chair John Godfrey, Safa’s work has come at an enormous cost. “She has a ferocious determination to align herself with the truth,” Godfrey said.

Safa Al-Ahmad spoke with the Yemeni American News about her work, her love for the country, and what the award means for her future:

What is the impact you were hoping for with the Yemeni Diaspora?

I hope they feel represented. I hope they feel like their complexities of what’s going on on the ground are reflected in the coverage. I know they must feel like I feel – the frustration with how little gets out. But also figuring out what is actually happening. Like, if you have family in Taizz, you don’t know what’s happening in Aden, it’s good to see what’s going on as well. So this is at least what I hope at a minimum, that they feel that this probably represents what is going on in the world.

I noticed that you’ve written, you’ve photographed. But it seems like it’s your cinematography that’s really had the largest impact. What do you think of that medium?

I think the documentary is a very powerful way of telling stories. If you’re writing a print story, or radio – it doesn’t have the same. Especially with facts like this. You are seeing the person say it. It’s not like I fabricated the quote. There are immediate honesty and transparency in that. Obviously you can edit things, but there’s something about hearing the person say it themselves. There is a power to the representation as well that they get to speak for themselves. This is why I insist on actually doing my films both in Arabic and in English. So the Yemenis can see it themselves and hear it in their own language. They don’t need a translation of what has been said about them. And I think there’s something powerful in that as well. You can hear the accent. You can hear the expressions. And there’s something powerful in that.

How do you see your reporting fitting into the broader mission of the Wallenberg Medal?

I’m still in shock. I am not worthy. I hope it solidifies that conversation and the importance of talking about it and doing this kind of coverage. And my ability to continue doing it as well. I hope that does happen to come off of this. And then it sits with such amazing people. So I see this less about me and more about the topic I’m covering. And to have the Yemen conflict recognized and the importance of covering it. I just happen to be the conduit to have done it. But I think the award recognizes how important it is to do this coverage. So I think that is the honor.

What was the initial thing that drew you to Yemen? Was it the Crisis?

I’ve been doing it before the crisis. So the crisis landed on me, not the other way around. It’s a fascinating country. And it’s gorgeous. So to me, to the politics of it. The complexity of it. The beauty of the people. How articulate they are about it. The awareness. The civil society there, it was so vibrant. There’s so much to do there. So it wasn’t the conflict that attracted me, I didn’t come to cover the war. The war happened while I was covering it.

It seems like your reporting tried to point to the broader complexity of the conflict. Do you think that complexity is the biggest challenge for peace in the region? Or is there more to it than just it’s complexity?

I think what’s stopping the war from ending is more the warring parties themselves. It’s not the complexity. This is what I was trying to allude to before, that Yemenis are quite capable of living these contradictions and disagreeing with each other and still meeting. Yemenis as a society are susceptible to this. This is very possible. Peace is very easy in Yemen. It’s just the Saudi Coalition who has to decide what they’re going to stop. That’s all it needs.