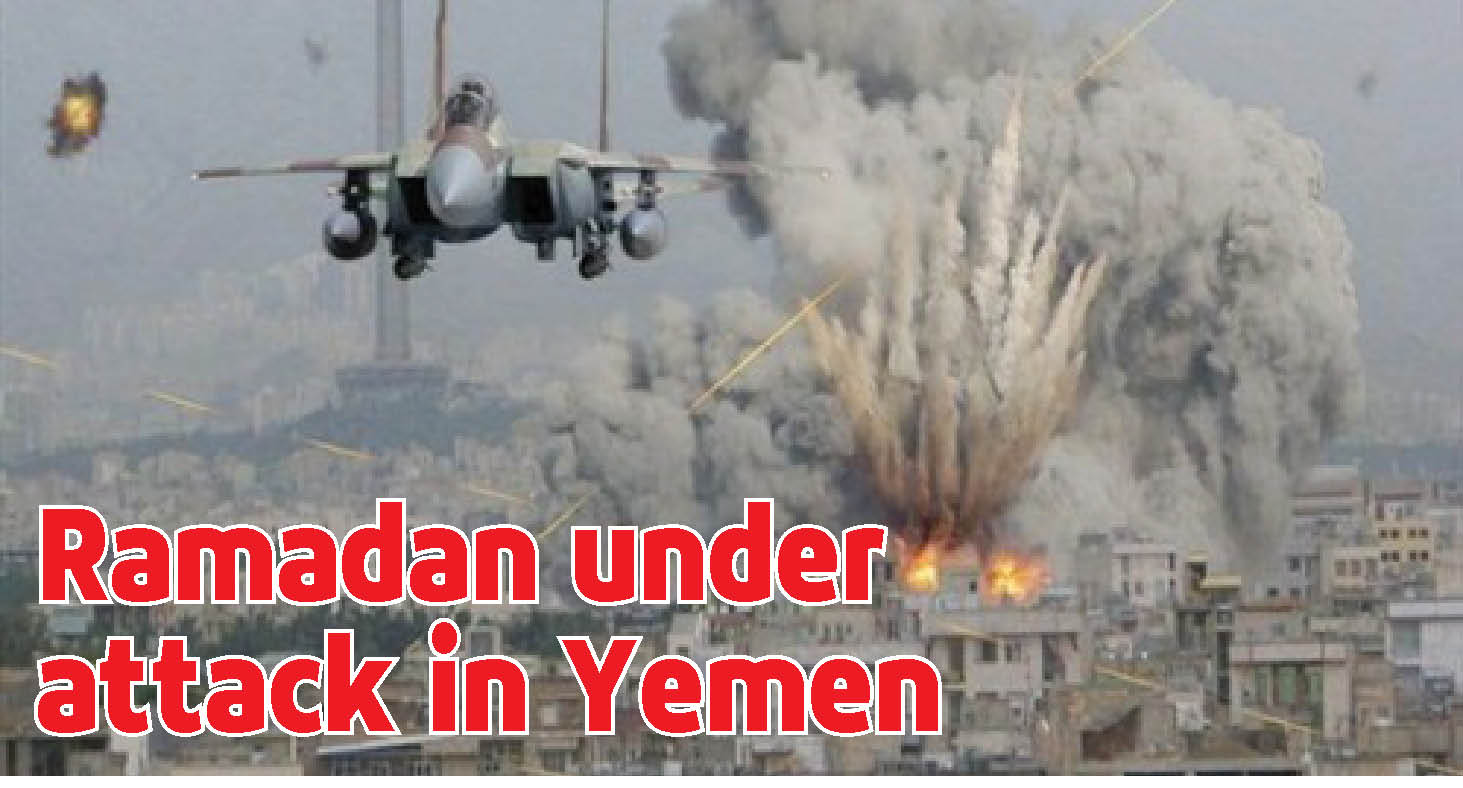 The suffering of Yemenis in Ramadan doubles during the month of fasting where people have been exacerbated by the war that and the suspension of the salaries of the majority of state employees and thus depriving many families of their only source of income. United Nations is estimating the vast majority of the Yemeni people are living under the poverty level and some are at the brink of famine.

In particular, in Sanaa, Ramadan is a hot season for this city of more than 3 million people, under more bombardments from the Saudi-led Coalition. Of the 3 million, about 1 million people are displaced from other provinces as a result of the conflict.

The strikes of the Coalition recently bombed the Presidency Office on May 7th adding yet another massacre to its list where citizens became a direct target to these attacks. The strikes caused dozens of casualties, among dead and wounded, were innocent children. In this heavily populated area mixed of residential and commercial properties, two missiles landed on the Office of Presidency killing many citizens who were in the area and caused a destruction in the building which represents a sovereign landmark of the state.  In addition, the targeting of the National Documentation Center represents a threat to the country’s most important historical documents. The center had a large number of people who were both inside and outside the building as well as a neighbor to two major schools, Abdulnasser and Ben Yazan Schools. In these two schools, students were taking exams which created a state of fear and panic. The targeting of these locations sends a dangerous message that the safety of people is no longer honored. Six innocent lives were taken away and more than 60 injured were the result of these attacks.

An image where a child was covered with blood and debris which was overwhelmingly shared on social media presented yet another headline to the tragedies that come as a result of these senseless and careless attacks. The war and siege have led this child to work on the streets with a weight scale to bring home any money to help feed his family. Yet, this child who was nearby the Presidency Office, trying to go about his day did not think he would be risking his own life. The boy did not know that the US aircraft “F-16” will leave Saudi Arabia, and drop its load of modern missiles on the place where he sits.

Death in Yemen has become very cheap. It does not distinguish between its victims, while the coalition does not differentiate between citizens and combatants; making the entire city with its heavy population a target for these attacks. Ramadan will become more tragic in light of this reality with all these strikes which have seem to have no specific targets. One would simply ask if the life of a Saudi citizen is more worthy than a Yemeni’s and when will the Saudi-led Coalition reconsider its strategies in targeting heavily populated areas? When will they take responsibility for their actions? What is the grave mistake that these innocent people have committed to be victims of the collateral damage? When will the World put an end to this damaging war?

In addition to the continuation of the war in its forms with the siege and the suspension of salaries, the bombing of planes continue, the public streets and the remaining state institutions are the futile targets. This means more killing and more destruction.

The voices of the “adhan – the calls to prayer” are mixed with the airplane’s noises which create a mixed atmosphere of fear and anticipation with the question: Where are the strikes? One would also question: is the targeting of Houthi leader justified to kill and injure dozens of innocent people?! If the targeting is justified, then that means the lives of these innocent people do not matter to the leaders of the Coalition. It is important to note that this is not the first time the Saudi-led coalition targets a civilian area. It has done so many times in the past including attacks on funerals, shopping centers, and gathering places. The Yemeni people are yet to enter the holy month of Ramadan and while battling hunger during the day and night, fearing the air strikes at any minute, are still waiting for the World to put an end to these tragedies by winding down the senseless war.