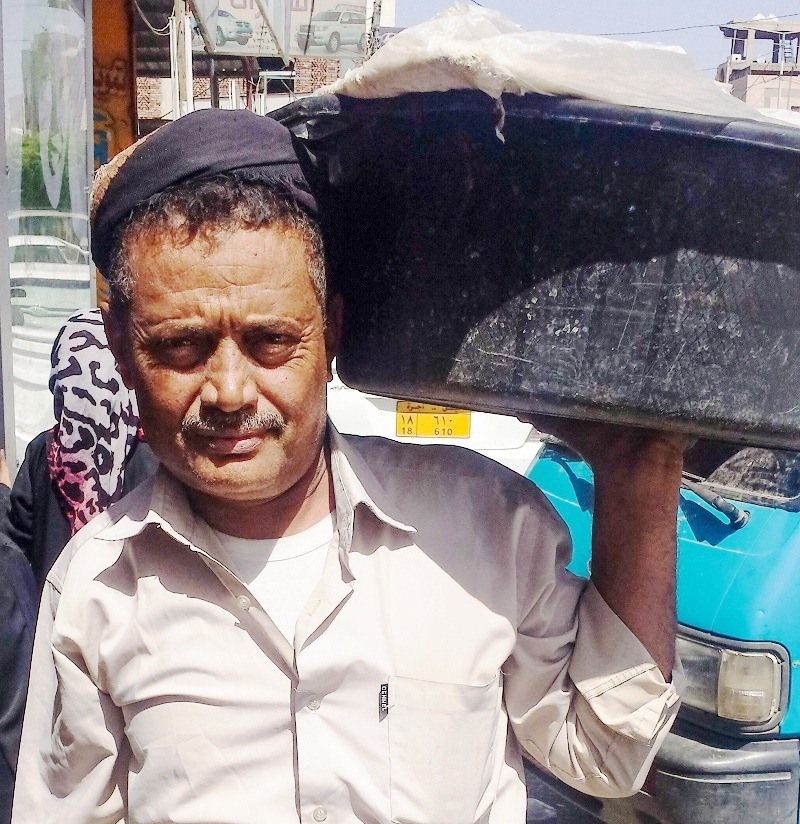 After many years of eking out a relatively stable living, as a tobacco salesman, in his birthplace in the District of Mocha, Southwest of the Governorate of Ta’ez, Qasim (50 years old) was compelled to leave the city of Mocha. Leaving his family behind he headed for Sana’a, making do with selling the traditional cheese of his home area along the sidewalks to face the hardships of life under the poverty that accompanied the tragic bloodletting. Such is the new struggle imposed on the lives of the Yemeni people arising out of this dreaded war.

Of course, it is a hard experience to have to leave a lifetime vocation and seek a new livelihood reluctantly. The new life brought on with it the new difficulties of the trials and tribulations of warfare that now people have to live under.
After 2 ½ years, most of normal life has been altered and most of the infrastructure of Yemen has been put out of commission. Moreover, more than 10,000 innocent civilians have been killed and more than 20,000 wounded, with over 2,700 children losing their lives (according to the Legal Center for Rights and Development) since the war started on March 26, 2015.
The war has resulted in complicated economic and living conditions which added to the humanitarian tragedies brought on by the war, especially the spread of communicable diseases, such as cholera, not helped at all by the deterioration of the health system. In addition, service utilities ceased to operate, famine and severe malnutrition became widespread, with 17 million Yemenis facing the threats of hunger and starvation, according to the Executive Director, Jose Grazziano, of the Food and Agricultural Organization (FAO), which is an increase of 17% from the previous year’s assessment. The latter explained that 7 million people are on the fourth stage of famine and the fifth is the last stage, when people just simply collapse from hunger. He noted that three quarters of the famished are in the Northern Yemeni Governorates.

The Other War
In parallel to this war, which has taken away any hopes for dreaming, the Yemeni people face another war, which is also more destructive. This war is the struggle for being able to provide for the daily needs of sustenance – an increasing challenge to survive day by day. In fact, the number of silent victims passing away from poverty, hunger and disease may be in excess of the falling victims from the violence of the war.
Thus Yemenis have to live under two threats, the threat of violence and finding themselves under the debris of bombed out buildings and the threat of the accompanying conditions of hunger and disease.
According to the UN Office for the Coordination of Humanitarian Affairs (OCHA), in its September report, there are 1.25 million Government employees in the country have not received their salaries for a year. In other words, this implies that more than a quarter of the population did not obtain their breadwinners’ regular salaries. “This destroyed their means of livelihood.”

A Hard Life
Life has become very hard for Yemenis, as they try to accommodate to the conditions brought on by the war. Furthermore, they haven’t the faintest idea when these deteriorating conditions will end. The previously cited OCHA report gave two examples of this situation. Ibrahim, 47 years old, lives with his four children and a diabetic mother. “I worked as an accountant for 25 years, but now I am forced to live with my relatives, because I could not afford to pay the rent”. Explaining further, “I haven’t obtained my salary in 10 months, and I had to seek other means of income to provide for my family. I worked as a house painter, a supermarket clerk, etc. in order to be able to buy essential needs for my family”. According to the English version of the OCHA report, , Ibrahim now lives on charity to a large extent. He said: “I used to live a dignified life never had to ask anyone to give me anything. My family has supported me during this crisis and I am grateful to them, but as the major provider for my family, having to rely on charity has hurt my dignity.” Ibrahim is worried about his mother, “I wanted to take her overseas for medical treatment, but we cannot take the risk of traveling 22 hours to Seyoun by car or 10 hours to Aden in order to reach Amman or Cairo. “The journey is very risky, and the only option I have is to wait the reopening of Sana’a Airport.

Pretentious Hope
Najat is a teacher in the city married to a civil servant and they have 2 children. The last time she received a full salary was eight months ago. She and her husband get a half salary plus coupons for purchasing food and clothing. We had to transfer our daughter from private school to public school. They have to borrow to meet the rent (YR 30,000) for the apartment (US $ 120). They want to leave Yemen, which is now farfetched.

The Only Life Available
Now, it is easy to see how difficult life can be for someone like Qasim, who had to leave his family and his age old business to eke out a meager living selling domestic cheese.