How effective are relief organizations versus individual initiatives? 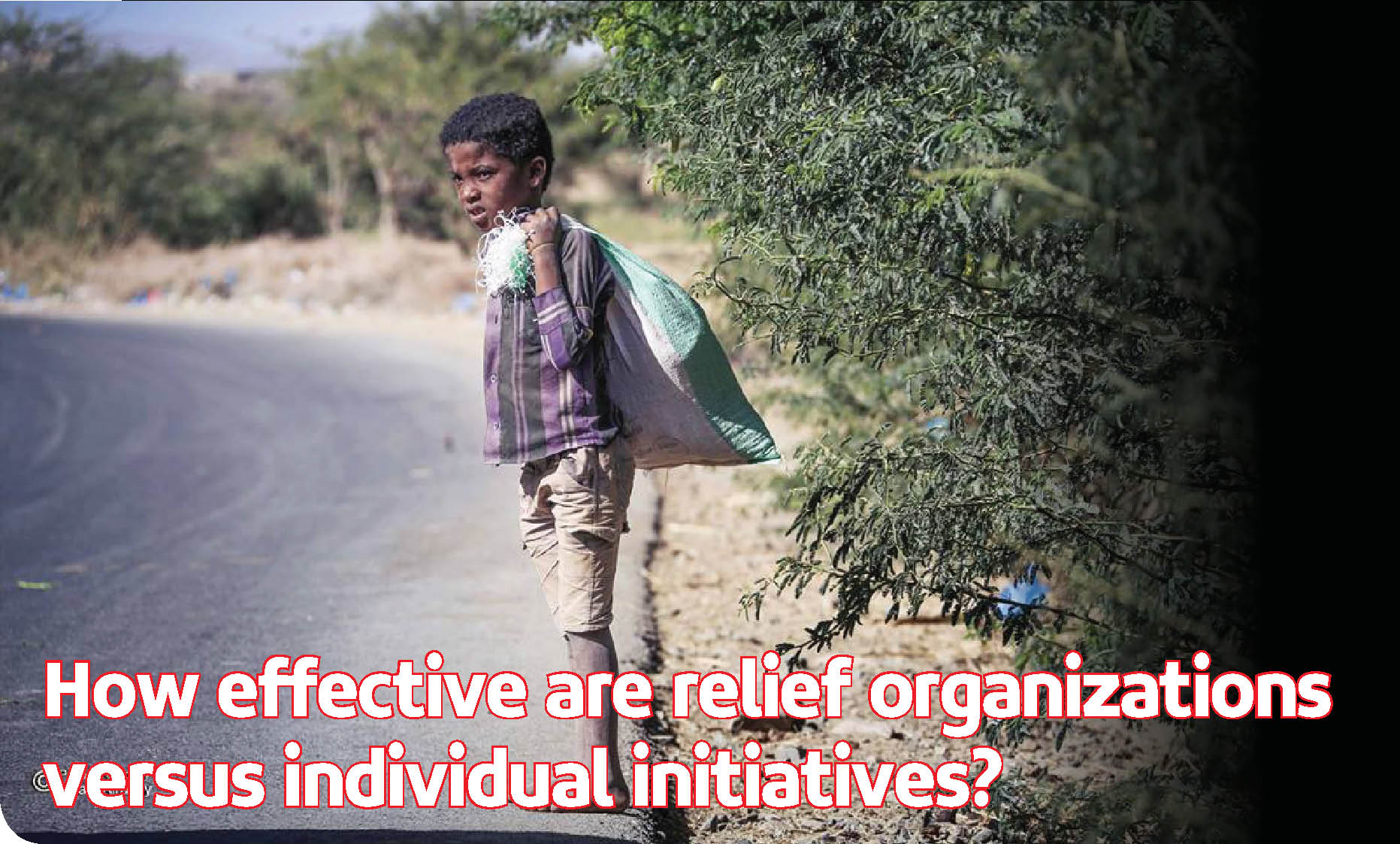 Humanitarian crisis situations in areas where there is war or natural disasters, there is always the debate on how effective are relief organizations versus small initiatives.

While relief organizations can take easily scale to respond to situations helping thousands if not millions of people, many ask on how effective these organizations and how much of the donations finally reach the receiving side after administrative costs. That’s why many people resort to help the needy directly or donating to small initiatives that are happening within their circle. With the dire situation in Yemen now where people are starving to death,

Local initiatives
Mr. Shaker Lashuel raised this issue in a post on his Facebook wall on November 10th. The post had a lot of interactions which led us to highlight the issue and some of the views presented in the discussion. In addition, the newspaper surveyed the opinion of one of the relief organizations concerned with Yemen to provide the other side of the story.

Confidence questioned
Dr. Lashuel pointed out that there are questions that must be asked by the donor for each relief or charity organization so that they can decide whether that organization will be their method donate. “These questions are:  What is the rate of disbursement on the management of charitable work of every dollar donated? .. (Is it 10 cents, or 40 or more or less). Imagine that you donate $1000 and you find out later that $400 was spent on “administrative costs”.  Who is responsible for this organization and do they have that information posted on their website for public view? Are their accounts audited by a competent auditing firm? 4. What is their tax exemption number?”

Dr. Lashuel later pointed out that there are a number of documents that any legal organization must have and must make available to the public: the annual activities, programs, and public expenditure report, copies of the detailed financial report for the last three years, the tax form 990 Tax Form 990.

Laws and Regulations
Mr. Alsadah commented on the issue of operating expenses. He said that these expenses are justified but not in the form practiced by some. He advises donors to donate directly to their families in Yemen, relatives or friends

Charity Dinner
In the same notion of operating expenses, another Facebook user, Mamoon Beek criticized the practices of some organizations, such as the fees of activities, events and charity dinners, as well as other expenditures when sending donations to Yemen, where salaries and transportation expenses are deducted, which means only 50% would get to the receiving party in the best case scenario. He also advises sending individual donations.

Continuity and development
The Yemeni American News asked representatives of Pure Hands, one of the relief organizations that’s focusing on the Yemeni humanitarian crisis.  Pure Hands board member Saleh Almathil said: “any organization or institution that is able to continue to develop and carry its operations must sustain itself.” He adds that “small initiatives have limited effect and usually does not continue”
He explained that “Pure Hands over the past five years was able to unite Yemenis in America, Arabs and Muslims in America, as well as those sympathetic to the Yemeni cause,  to reach more than 700,000 people in Yemen, helping them through various projects. We were also able to assist many individuals to carry their small initiatives successfully through the institutional and legal entity of the organization.”
In answering the direct question of the percentage of administrative costs, Almathil said that in 2017 the organization had an operating budget of $17 million and only 10% went to administrative costs. Almathil adds “financial and administrative transparency is a principle for us since the first day we established the organization. The organization received all the legal licenses to operate in the U.S. and Yemen and successfully adheres to all U.S. laws.
Almathil stressed that in light of the humanitarian tragedy that Yemen is experiencing, there is no excuse for anyone; individuals and organizations; to not help the people in Yemen by any means or methods.