From public sector to car wash: A Yemeni story of perseverance 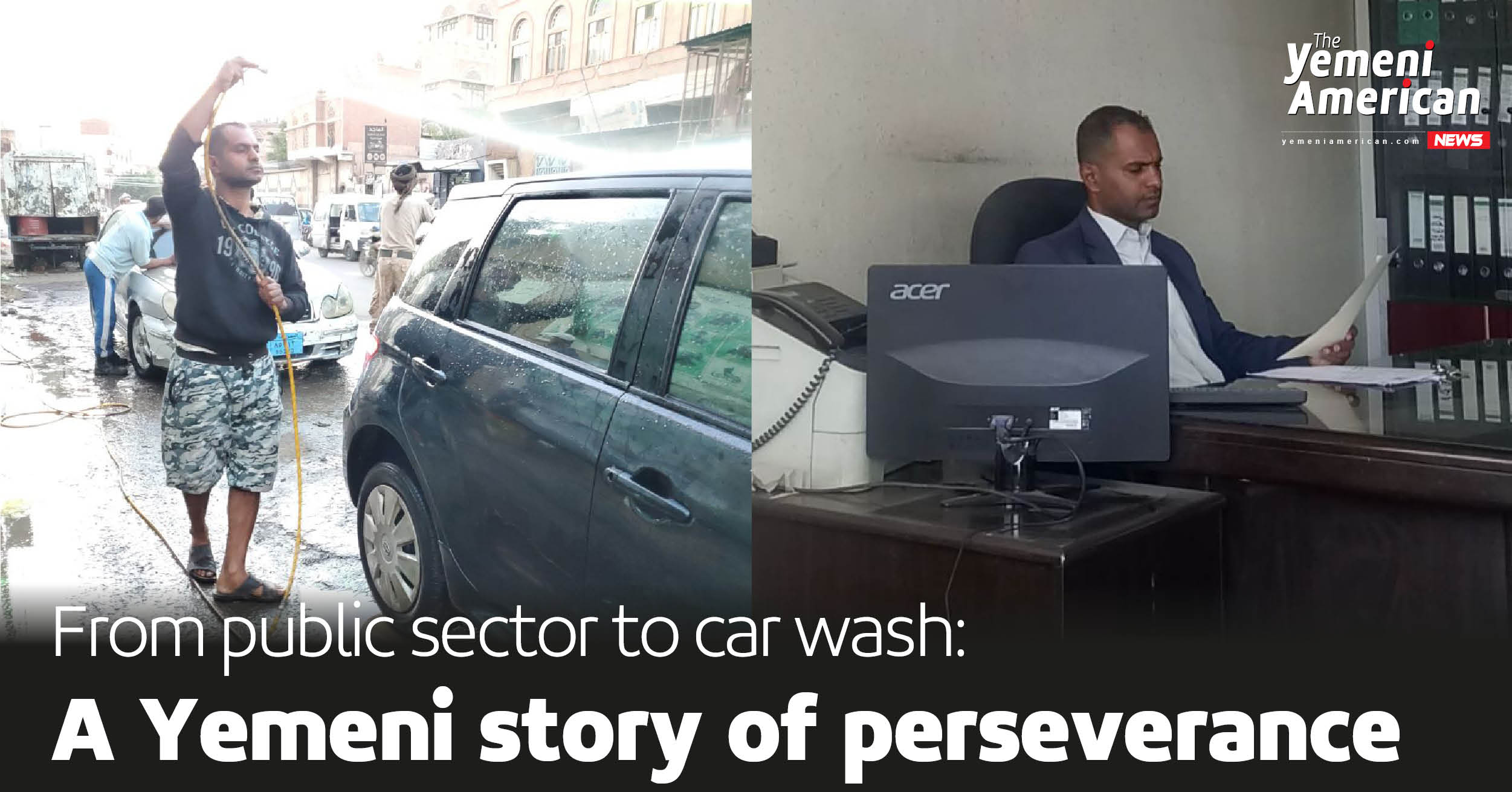 Hisham al-Hakmi was heading towards a promising career. After starting out as a contractor for Yemen’s public media institution, the Revolution Foundation for Press, Printing and Publishing, he rose through the ranks to become a full-time staffer, a lead designer in several publications and a senior director for the agency in the central Amran Governorate.

Now al-Hakmi runs a carwash in the capital Sanaa to put bread on his family’s table. His story – like many in the war-torn, poverty stricken country – embodies the spirit of perseverance that Yemenis had to rely on in order to adapt to the worsening circumstances over the past seven years of conflict.

“My work at the car wash has become the main source of income for my family of five, enabling me to pay rent, cover my children’s education and lead a life of dignity without relying on others,” al-Hakmi, 40, tells the Yemeni American News.

Although he has gone from being a branch manager at a public institution to working on a car wash on a Sanaa sidewalk, al-Hakimi says he is grateful to have been able to weather the multiple crises that hit the country since the war broke out. Yemen’s public sector employees have been without regular salaries since 2016, as the UN-recognized government stopped paying them amid a fight over the central bank’s funds between the warring parties.

“When wages stopped coming in 2016, everything turned upside down. I found myself without income and I started facing financial challenges and difficulties. For many months, my debts started piling up, and I started feeling regret for not having any source of income other than my government job. So I started searching for something,” al-Hakmi tells the Yemeni American News.

The 40-year-old had to resign from the Revolution Foundation for Press, Printing and Publishing after the Amran branch of the agency started amassing its own debts. He explained that a cement factory in the governorate mostly paid for the subscriptions to fund the agency. But the plant was bombed by the Saudi-led coalition in 2016 in an air raid that killed 15 people.

“The air strike paralyzed the governorate, and things got worse as the revenues of the Amran branch started dwindling. So I had to quit and take my family to the relative safety of the capital,” al-Hakmi said. “That’s when I started my journey searching for a job. I ended up borrowing money to buy a small car washing machine and started working on a sidewalk in the south of Sanaa.”

He said he went into that business because of the low costs, especially after finding a public spot with access to the drainage system. On the same side streets, three similar businesses have opened, as residents, including internally displaced refugees, push to make ends meet.

Al-Hakmi says income from the business is not steady, but it is better than nothing. Business is good on weekends and holidays, but almost disappears after rain comes and washes the cars for their owners free of charge.

To get to have a business he calls his own, al-Hakimi had to overcome numerous challenges. He was arrested early on for not having a permit only to be released after explaining his financial struggle to the local authorities. A while later, security forces broke his water tanks, and he had to prove to them that his activities do not bother local residents and businesses. “They allowed me to continue to work from the sidewalk until my wages return,” he said.

In May, he was offered a job with the publishing institution, so he agreed to return because the car wash income will make up for the loss of pay. Now he goes to the government job in the morning then changes from his formal attire to work at the car wash in the evening.

Since the war began, the already impoverished country has been brought to the verge of famine, and the economic meltdown has been exasperated by the impasse over public wages. The United Nations has described Yemen as the world’s worst humanitarian crisis with a staggering 23.4 million people — almost three quarters of the population — requiring some form of humanitarian assistance in 2022.

“My message to the Yemeni youth is that they can overcome all the difficult challenges and obstacles in their way when they do not give in to despair, negative thinking and complaining that leads to nothing except more frustration,” al-Hakmi said. “Do not count on anyone but yourselves.”