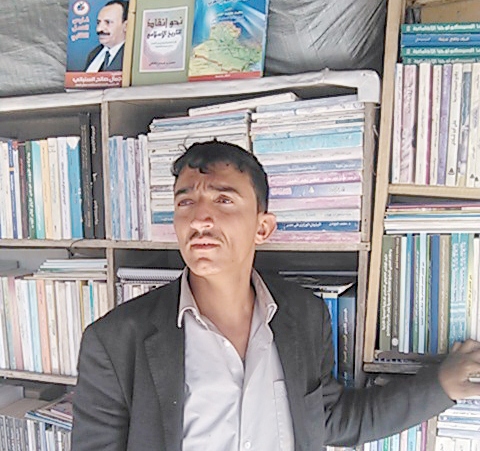 On September 1, 2016, Bashir was lucky to be one in one of those lucky near misses, that saved his life. Bashir was fated to live again after a nearly fatal encounter with an F-15S missile that landed near him but did not explode. Noteworthy to mention here that the impact of these mass destruction ordnances can extend to a destructive impact of half a kilometer radius, with lesser effects further out from the epicenter of the explosion.

Within such radiuses, one is bound to see all nearby window glass and the stain glass of hanging arches above the windows broken to pieces, not to mention the slamming of forcefully opened doors inside buildings against whatever may be within the span of their opening. But at 9:00 AM of that day, the rapidly landing missile just made a thud on the ground and did not produce any further sounds, or cause any losses of life or damage to any surrounding structures or vehicle. Bashir, standing just ten meters away from where the missile landed, quickly woke up from the shock of the crashing missile. If one is familiar with Sana’a, Maidan Al-Tahrir, or Liberation Square is usually a crowded area with cars and buses hustling to and fro and people rushing to their work places, before the closing bell for attendance is rung.

Bashir Mohammed was standing next to the street ground, where he had just finished laying out old books on a canvas he used as a makeshift store, to engage in his trade. He thanked Allah for his safety, as the last ten years of his life rolled in front of him recalling how he had come from his home village in Ta’ez Governorate ten years ago to try to eke out a living in the Capital City of Sana’a selling used school textbooks with his friend, Sa’eed Al-Khudairy, also selling the same merchandise adjacent to Bashir.

Yemeni- American News interviewed Bashir to present our readers just one of the 2 million different faces that populate Yemen’s rapidly growing metropolis. Bashir is a great example of the determination of Yemenis to proceed with life despite the threat of death looming in the air Bashir stood steadfast ready to carry on business as usual after nearly escaping a tragic fate, as if nothing has transpired.

He feels his work is important for the cultural enhancement of his people, as he is providing a service to those who aspire for cultural development.

Y-A: How long have you been selling used books other old publications?

Bashir: I have been doing this for about eight years.

Y-A: Where do you get the books you sell?

Bashir: Some of them are obtained from family homes, where they have been stored for a long time. The owners may have died and the inheritors sell them or the house is getting small for the growing family, so they sell the books to make room for human occupancy, since they do not have money to expand the space of the domicile, or the house is leased and there is no other way to make room for new occupants from the family renting the house.

So the book owners bring any old books top us to resell them to the public at affordable prices. Sometimes, we get books from bookstores, which have valuable books of high demand and because of more people passing our street outlets, there is a potential for greater demand of such high value literature. However, the most favorite books are those which come from inside the homes.

We sometimes also obtain books from our own customers and thus our sources for the merchandise can be the people we serve.

Y-A: Do you read any of the books you sell?

Bashir: Yes, I like to read books on political affairs or famous politicians, past and present.

Y-A: Is this a profitable business?

Bashir: These days, everyone is having a hard time making ends meet. So, we barely stay above water.

However, in the past, we did indeed manage to make some benefit from the trade.

Y-A: What about before 2011, the Year of the so-called Arab Spring, was the situation different?

Bashir: Of course, before 2011, everything was moving. No matter what business you pursued, you are bound to make gains, not just by selling books.

After all these revolts, the Arab World lost any hope of rejuvenation. Everything went haywire.

Prices, climbed exorbitantly, no work can be found, businesses ceased to function; everything came to a standstill.

Even government employees are without pay, they haven’t gotten paid for the last five to six months. So, you can imagine how it is for merchandise outlets and poor street sellers like me, who do not have salaries to start with. To whom do we sell, if people do not have salaries.

Y-A: Who are the most buyers of your books?

Bashir: Civil servants and students. But now since the salary crisis broke out, senior citizens are the most buyers of our books.

Y-A: What about women?

Bashir: About half of our customers are women. They mostly purchase literary works or novels, all of which go dramatically fast. They are “fast sellers”.

Y-A: What about political books?

They generally go fast, but the older the books the more they are prized by our customers, especially those going back to over 50 or sixty years. When I get such historical books, I can call certain customers who cherish such historical literature. With the new political literature, the market is much slower. Maybe people do not believe in the modern political literary output. Maybe people feel that modern politicians have let them down. That is why they prefer older books, which remind them of days when politicians were more honest and sincere.

Y-A: What is the most expensive books you have sold?

Y-A: Do you have to pay to be able to peddle your books on the street.

Bashir: I do not pay anything to anyone. If anyone comes to bother me or harass me, I complain to the Ministry of Culture, and they will act to stop such nuisance.

Y-A: Does the Ministry of Culture have any relationship with your trade.

Bashir: We had a meeting once with the Acting Minister, Ms Huda Ablan. She issued permits to us.

We also had a street book fair once launched by Ms. Ablan.

In the past, the former Minister of Culture, occasionally paid us a visit.