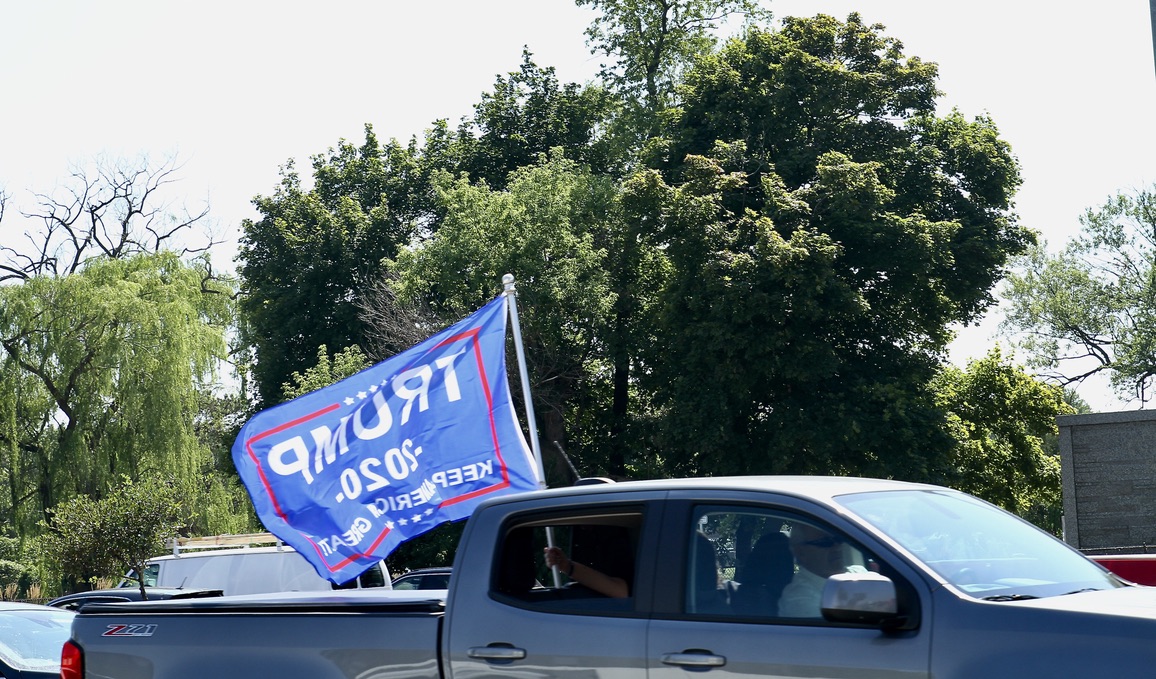 Birmingham, Mich. – This year’s Woodward Dream Cruise was officially canceled by the organizers of the annual celebration of old cars, hot rods, and classic cruisers. But that didn’t stop the Oakland County Republican Party, the official Republican organization for Oakland County, from organizing their own ‘Make America Great Again’ Dream Cruise. Driving with Trump-Supporting regalia from Ferndale to Pontiac, the 2020 Dream Cruisers showed their support for the controversial 45th President of the United States.

On the sidelines of Woodward, near 11 Mile road, a group of protesters set up their signs for a long and sunny day of demonstrating. They stuck out from the crowd with their massive messages showing pro-BLM slogans and anti-Trump phrases.

“Knowing that there was going to be a pro Trump car rally, we felt that we should try to counteract and show our presence, being very much anti Trump,” said Joanne Kristal, one of the protest’s organizers.

To say they were outnumbered would be an understatement. Around 25 demonstrators were being passed by hundreds of SUVs, lifted trucks and American-made sportscars all flying the blue and white Trump 2020 flag. While they stood in the shade of broad trees, some cars honked their horns in show of support for their cause while most didn’t seem to support their efforts.

In a way, they were doing something small, but they saw it as an essential task. The purpose was “to talk about how serious this moment is,” explains Rich Feldman of Huntington Woods.  “In terms of our own humanity, on how dangerous Mr. Trump and his followers are… we realize we are in a great conversation in our country about which way we’re going. And some of us believe it’s critical that people in the suburbs [understand that conversation.]”

Although recent years have not been as overtly political as this year’s, Feldman says that the Dream Cruise has been growing increasingly polarized over the last few years.

“Well, I think it really started way back when with the response to the creation of the Tea Party and its response to President Obama,” Feldman said. “And then it continued with the president-elect President Trump. Then it just gave what we call white rage in response to the Black Lives Matter movement that emerged.”

Walking down the sidewalks of Woodward Avenue, most people weren’t as interested in the political dynamic of this year’s event. Many people said they didn’t understand why Trump Supporters decided to make this tradition into something for themselves. Others who weren’t aware of the Republican party’s calling the event their own were wondering why politics had anything to do with it.

The Trump supporters in the crowd however didn’t share that sentiment. “There is no Politics Free Zone in America left anymore,” said Brian Pannebecker. “We’re a very divided country. You have the democrats who are extremely leftist, Marxist and they became a socialist party. And then the republicans are trying to maintain the status quo, law and order, pro-family traditional family values. So there is no political free zone in America anymore. You have to make a choice.”

Pannebecker is the founder of Autoworkers for Trump. He says that almost immediately after the official Dream Cruise was cancelled – due to concerns about social distancing and spread of the COVID-19 virus – Trump supporters called the event their own.

“After the organizers of the dream cruise said it was cancelled, the Trump people said ‘No, it’s not,’ We’re still gonna be out there,” Pannebecker said.

For the vast majority of Apolitical and Trump-backing people at the Dream Cruise, the event went very smoothly. Despite scorching weather and what must have been exhaust fumes in the air, people had a lot of fun. But for Mark Williams, who was standing at a busy corner with a Vote for Biden sign, he didn’t seem to be enjoying the event.

“I told my wife I was going to go down and protest the Trump thing and she rolled her eyes,” Williams said. “So I said, ‘okay, see yah.’”

Again, some support from the drivers found its way to Williams. But mostly the reaction was negative.

Ahead of the 2020 Election, events like this are happening across the country as each party is working to rally their base for the Nov. 3 Election. Polls published by CNN, ABC News and the Washington Post show the Biden is leading in front of Trump by 4-10% of voters. Meanwhile Rice University and YouGov published polls showing Trump leading by 7%. So by all means, the race for president isn’t over yet.