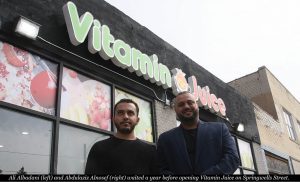 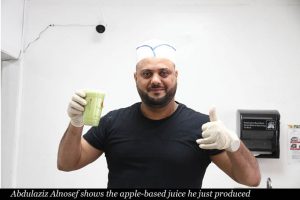 Come to Southwest Detroit and you’ll see what people are talking about when they say that the neighborhood’s business is booming. Restaurants, bakeries and stores have been propping the mostly immigrant enclave with an entrepreneurial tenacity. And one of the newest businesses to take a storefront is no different from that high standard.
Vitamin Juice was originally the idea of Saudi Arabian-born Abdulaziz Alnasef and his partner Ali Albadani. Together, they brought Abdulaziz‘s vast experience with tasteful recipes into an American market.
Originally, Alnasef started his ventures in Saudi Arabia’s Juice Industry in a small town on the peninsula. Starting in 2002, his recipes and work ultimately gave way to hundreds of stores in Saudi Arabia and some of its surrounding countries.
Unfortunately, Alnasef couldn’t just start right away when his life eventually brought him to the United States. After first coming to New York City, he worked in some of the city’s grocery stores. But while Alnasef always wanted to go into the Juice business in America, his family at the grocery stores didn’t want to take him seriously.
Alnasef relocated to Michigan and found his way into working at Shatila Bakery. After some serious convincing, Shatila allowed Alnasef a small corner of their shop to test his juices on Shatila’s customers. “This is when I started,” Alnasef said. “My goal was to own my own business.”
Eventually customers started really enjoying the juices and coffees that Alnasef would make. What used to be a neglected part of Shatila’s large store had now become a vibrant spot for bringing in more customers.
It wasn’t until Alnasef met his partner that he began to broaden his vision. Aziz explained that he needed someone who could think big with him. And that’s when he met Albadani, who was a Truck driver before he went into business with Aziz.
“When we first started, there were a lot of obstacles,” Albadani said. “It took us almost a year, 16 months.”
Those months were spent selling products and constructing a storefront in Detroit’s Southwest neighborhood. The two sold products at festivals and other places to test the recipes. When the storefront was ready and the menu had been set, they finally went into business.
Try one of their products, and you’ll know how much work went into the product. Their recipes draw from a broad range of ingredients that work together to create something genuinely satisfying. One of their drinks uses strawberry, avocado, mango and soft ice cream to make something that is both delicious and healthy-feeling.
For the owners of Vitamin Juice, they’re looking to give people of all diets what they need to enjoy something tasty. So for people who are vegetarians, vegans, or have other dietary needs, they can easily find what they need on a menu. And for anyone that likes what they’ve tried, the menu is still going to be expanding in the future.
For the ever-expanding business corridor of Southwest Detroit, businesses of every kind find themselves contributing to a new center for the city’s resurgence.