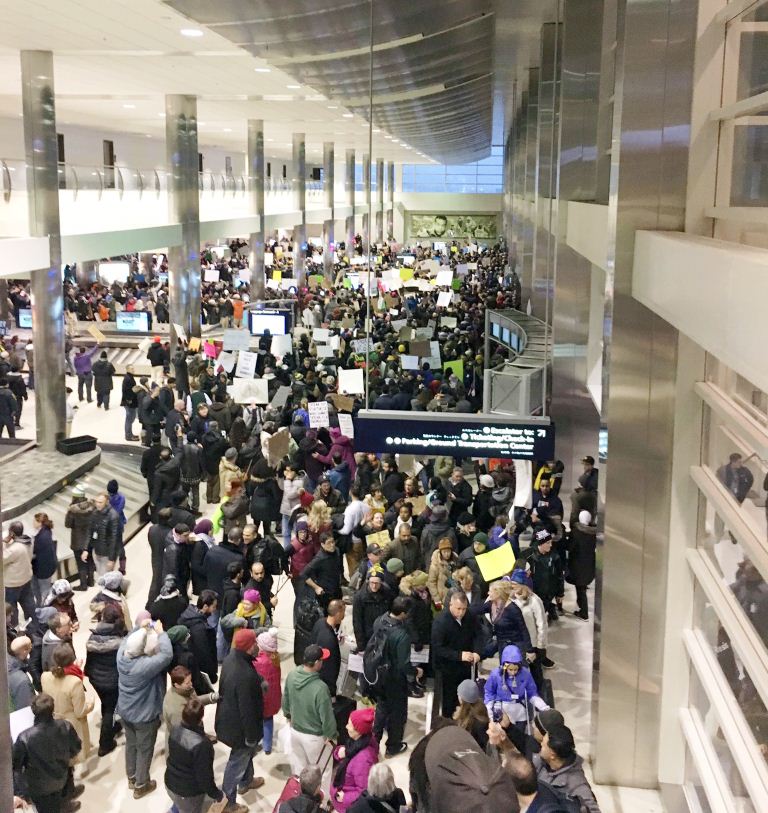 Jet Chalk of Ypsilanti held a sign in Arabic that read, “I Love You All.” Though he is not of Arabic descent

Between chants of “No Ban, No Wall!” and “No Hate, No Fear, Refugees are Welcome Here!” thousands of demonstrators gathered outside the Detroit Metro Airport to protest President Donald Trump’s sweeping travel ban.

The executive order restricts resettlement for all refugees arriving to the United States for 120 days and bars nationals from Yemen, Iraq, Iran, Syria, Somalia, Sudan, and Libya, from entering the country. During his campaign, Trump suggested a “total and complete shutdown of Muslims entering the United States.” In response to the decree, thousands of Americans met at various airports across the country to express their dissent. Following similar events in Dearborn and Hamtramck earlier that Sunday, protesters rallied around the airport’s departure and arrival gates to oppose the president’s executive action.

“When it comes to people from Yemen in particular, the people affected are immediate relatives of American citizens of Yemeni descent,” said Wali Altahif of Dearborn, who attended the protest. “These are not people that all of the sudden applied for visas to come here. Their paperwork has been there for years. They’ve been through the vetting process. They’ve been through the security process. They’ve been through the health screening process.” Altahif said his father, a U.S. citizen currently visiting Yemen, along with other green card holding family members, are facing hurdles coming back to the country. Though saddened by the events leading up to the rally, Altahif said he was reminded of the America that everyone dreams of, a country that teaches its citizens to express their opinions when something is wrong. “The overwhelming support from the non-Yemeni community was encouraging. We all feel that this executive order is discriminatory, it’s illegal, and most importantly, un-American.”

In the crowd outside the departure gate, Jet Chalk of Ypsilanti held a sign in Arabic that read, “I Love You All.” Though he is not of Arabic descent, Chalk said he was making an important point. “I feel like it’s the polar opposite of the message that Trump and a lot of reactionary, ignorant, hateful, white Americans are sending to the Muslim-American community right now,” Chalk said.

“This shows that not all white people are afraid of Muslim-Americans.”
“The timing, the fact that [the executive order] was announced on International Holocaust Remembrance Day is something that’s not lost on us,” said David Kurzmann, executive director of the Jewish Community Relations Council of Metropolitan Detroit. “The Jewish community knows very well the consequences of excluding people from this country from closing our borders. One need only to look back a couple generations ago and the consequences during World War II. That’s why we’re here. I’m proud to show the Jewish community is standing in solidarity and we’re joined by many, many friends today.”

“This is ridiculous,” said Afnan Tooba, 15, of Dearborn, who went to the protest with her family. “All it’s going to do is hurt America… [the country] is going to make a lot more enemies and lose a lot of allies and America looks really bad to the world right now. I think it’s just stupid.”

As more and more people came to Detroit Metro, the demonstrators outside eventually made their way indoors towards the baggage claim area. There, the protesters gathered around the luggage carrousels while officers from the Department of Homeland Security climbed atop them to maintain crowd control. At one point, Karar Alhi-imdoun, 19, dashed across the carrousel, but was stopped and removed by law enforcement. “We have to let them know what we’re coming here for,” the Dearborn Heights resident said, as he held a banner that read “Become Ungovernable.” In the end, there were no reports of violence or arrest.

Former state lawmaker Rashida Tlaib was at the rally making protest signs. “I think the resistance in what you hear and what you see here which is a beautiful array, a rainbow, of faiths and backgrounds, even some political opinions,” Tlaib said. “People here know and feel that this is completely wrong, that banning people from coming into this country solely based on their faith is un-American.”

The following Monday, Tlaib and 26 other Muslim-Americans filed a lawsuit against President Trump, the U.S.

Department of State, the Secretary of the Department of Homeland Security, and the Director of National Intelligence. The suit claims the executive action enacted by Trump is religiously discriminatory towards Muslims.

The plaintiffs include Dawud Walid, executive director of the Council on American-Islamic Relations Michigan chapter and Namira Islam of Oakland County, executive director of the Muslim Anti-Racism Collaborative. The lawsuit also includes three plaintiffs from Michigan who did not disclose their names. One is an unnamed man of Yemeni national origin residing in Wayne County. According to the suit, he holds a student visa and is unable to travel outside the United States as a result of the order. Another unnamed man listed in the suit is an Oakland County resident of Syrian heritage practicing as an imam. Also included in the lawsuit is a woman, who is seeking asylum from Syria, currently residing in Wayne County.