The Detroiter who’s Innovating Soul Food in the Halal Tradition. 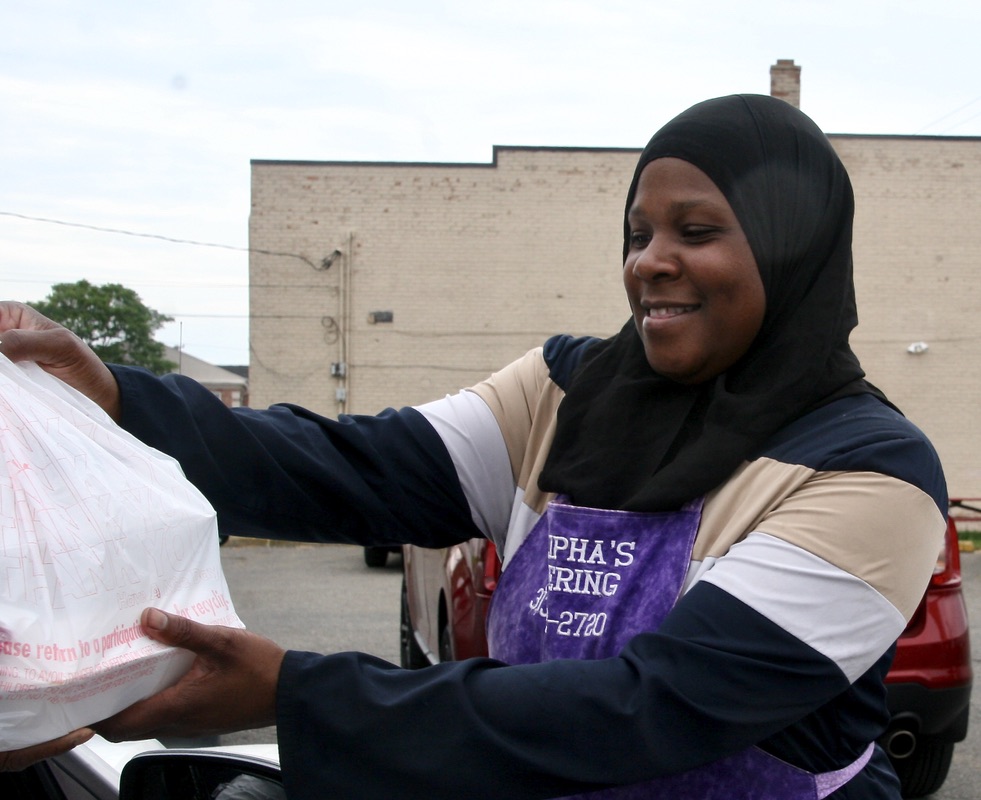 Dearborn, Mich.– Ribs and barbecue chicken, sides of greens and mac and cheese, all finished with sweet potato pie—this is the American Southern Soul Food tradition, and in Khalipha Kane’s hands it is 100% halal. Her business, Khalipha’s Katering, has expanded Metro Detroit’s restaurant culture with her innovative cuisine. And she cooks from the heart, something felt among her many fans.

On Sunday, Khalipha hosted a halal Soul Food cookout in Dearborn as a way to raise money for the next phase of her business, a food truck envisioned as Khalipha’s Mobile Kitchen. Khalipha and a group of volunteers served a drive-thru style dinner in the crowded parking lot of the Hanini Outreach Center.

A plate of barbecue chicken with sides of green beans and mac and cheese left customers completely satisfied, but eager to return for more. The chicken wings were tender, crisp, and smoky-sweet from being freshly prepared, tasting like something that could only be made from scratch.

“My grandmother was my biggest influence,” Khalipha said. “All my cooking and a lot of my passion for the recipes originally came from my grandmother.”

Khalipha’s Grandmother, Mrs. Mary Williams, was born in Alabama and raised in Florida – two strong regions in the South’s many culinary traditions. Recipes perfected over generations found their way to Michigan when Mrs. Williams moved here as young woman. 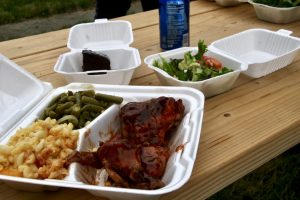 Barbecue Chicken, Mac and Cheese and Greens, all topped off with a slice of cake.

As a child, Khalipha admired her grandmother, watching the hard-working woman lovingly provide for her family. As the years passed, Soul Food became a way for Khalipha to preserve a sense of culture for her own children and grandchildren, and to keep traditions alive for her community.

Khalipha’s Mobile Kitchen will enable Khalipha’s Katering to reach a broader audience. Since 1997, Khalipha has provisioned area events, like conferences, weddings, graduations, and aqiqahs (celebrations of birth). She prepares food on-site or sometimes works out of her home. As her business grows, Khalipha finds that she needs a mobile kitchen’s space and flexibility. The food truck will allow Khalipha to expand her catering business and service the community in new ways.

Khalipha explained that at the beginning of her career, the majority of her clientele came from the African American community. In 2014, she began participating in Canton’s annual Halal Fest. That event provided a turning point for Khalipha’s business.

At a festival dominated by South Asian and Middle Eastern cuisines, Khalipha’s Soul Food stood out for its American-inspired change to the Halal tradition. Many flocked to her booth to sample Soul Food flavors for the first time. Khalipha gained customers from Bangladeshi, Pakistani, and Indian communities as well as those who trace roots to places like Yemen, Palestine, and Lebanon.

These delighted customers remained in contact with Khalipha, inviting her to cater their events. In a way, Khalipha has become a cross-over artist by connecting communities through her culinary feats.

Maha Mustafa is a community organizer from Dearborn who volunteers at the Islamic Center of Detroit and Hanini Outreach and Community Center in Dearborn. As a fan of Khalipha for several years, she’s seen the growing interest in Halal Soul Food over time.

“It is very special for the Muslim community to have something unique,” Mustafa said. “Sister Khalipha’s food is very tasty, and community members are always inquiring about when the next cookout will be.”

Rashid Mahdi, a long-time customer of Khalipha drove in from Southfield for the fundraiser.

“I contact Khalipha every time I am in Detroit to see if she is cooking that day,” said Mahdi, who was visiting from Ohio and ordered ten plates of food for his family. “The food was amazing, as it always is,” Rashid reported. “It is extremely difficult to find halal Soul Food in Ohio. And in Detroit, there are not enough places,” he affirmed.

About three hours into the fundraiser, all of Khalipha’s meals sold out. She served 275 meals to customers who drove in from Detroit, Canton, Dearborn Heights, and Ann Arbor. The money raised will bring Khalipha closer to her mobile kitchen, a dream that anyone who’s tried Khalipha’s cooking will celebrate when achieved.