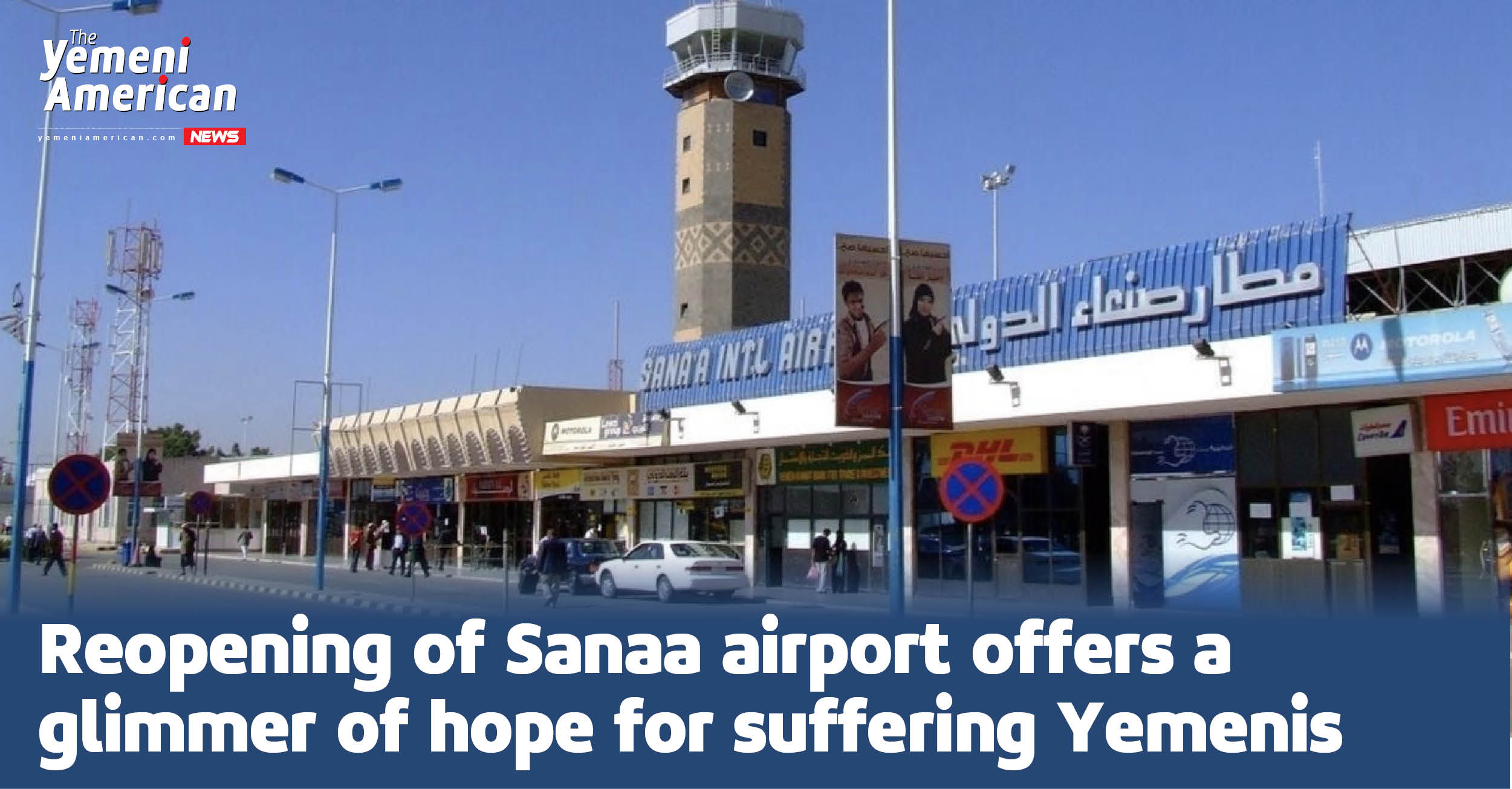 The reopening of the Sanaa airport has offered a glimmer of hope for Yemenis who have been suffering from the woes of violence, blockade and economic collapse.

The Sanaa International Airport had been welcoming dozens of international flights daily even after the war had fully broken out in March 2015, but the Yemeni capital’s air space was eventually shuttered to air travel more than six years ago.

The resumption of flights as a result of the truce between the warring sides has now revived the hope of thousands of people in and outside Yemen – including those stuck outside the country or people looking to leave due to personal or medical emergencies.

However, the limited number of flights and cost of travel remain major hurdles.

For the past year, leaving or arriving to Sanaa from abroad required traveling on unsafe land routes, where innocent people have fallen victims to being caught in the crosshairs of the war.

The move was part of the United Nations-brokered ceasefire in April, which was extended for two months in June. The truce stipulated allowing some flights out of and into Sanaa, but it took weeks for the first commercial airplane to leave the Yemeni capital.

As of May 22, over 2313 travelers have left from Sanaa on 10 trips to Amman and one to Cairo, and the airport has welcomed 2089 passengers.

Ali Mohammed was able to leave with his parents from the Sanaa airport after four years of trying. His 79-year-old father suffers from prostate enlargement, and his 68-year-old mother suffers from complications of diabetes and hypertension. Both were recommended medical care abroad.

“I cannot describe my happiness to be able to save my parents from their pain by flying from the Sanaa airport. Their health situation did not allow us to transport them via land to Aden,” Mohammed told the Yemeni American News.

He added that the travel experience from the Sanaa airport was “comfortable” despite the high price of tickets, which cost as much as $700 per passenger. He also expressed disappointment that the flights are mostly limited to Jordan, where it takes a long time for travelers to obtain visas for third countries.

The relief of Yemeni expatriates who were able to return to the country via the airport equals those who have been allowed to leave, even if their suffering differs. Bader al-Qahtan, a Yemeni citizen living in Jordan, booked a ticket to visit his family after failing to see them for five years.

“My trips to Yemen did not end with the war, but the suffering I endured after my last return to the Aden airport and the danger of traveling from Aden to Sanaa stopped me from taking that trip again,” Qahtan told the Yemeni American News.

On top of the dangerous, rough roads linking the Yemeni provinces, dozens of travelers have fallen victim to blackmail and arbitrary violence by armed groups.

Those issues came to the surface after the killing of Yemeni American Abdul Malik Al-Sanabani, who was shot at a checkpoint in Lahij Governorate by forces loyal to the Southern Transitional Council, which is allied with the Saudi-led coalition. The incident, which garnered international attention and calls for accountability, deterred many Yemenis from embarking on the same journey.

Still, the mere opening of the Sanaa airport does not mean that everyone looking to travel now can leave the country. Ahmad Mohammed Ali, of the Amran Governorate, has been looking to transport his father, who needs heart surgery, out of the country since the truce was announced. But despite selling assets and borrowing money to cover the cost of the flight, he has come short because of the limited availability of flights.

“In the three months of the truce, I have been working with a travel agency to book my ticket to no avail. All the seats are reserved, and my dad’s health is deteriorating,” he explained to the Yemeni American news.

The 32 flights that have been approved so far as part of the UN initiative are not enough to transport more than 30,000 patients who are suffering chronic illnesses, including cancer and kidney failure, said Mutahar Al-Darwish, president of the Superior Medical Committee of the Houthi-controlled government in Sanaa.

He added that more than 400 of those registered patients have died over the past two years.

Asked about the process of choosing patients to take seats on the limited number of flights, Darwish said the priority is for people with the most serious health problems, including children and the elderly. He said only 800 patients have been able to leave out of 4,000 who had the means to purchase tickets, while thousands others cannot cover the cost of flights and treatment.

Darwish said the Medical Committee has been trying to describe the dire humanitarian situation to the United Nations. “But there has been inaction from the international body when dealing with our calls,” he said.

Officials and allies of the Houthi movement have been decrying what they call broken promises by the United Nations and the Saudi-led coalition to allow flights from and to Sanaa.

The truce had called for 24 flights out of Sanaa, but as of late June only 11 had actually materialized.

“The United Nation is the mediator when it comes to the truce, but unfortunately it has not fulfilled its obligations to pressure the coalition to live up to what had been agreed to on allowing flights,” said the general director of Sanaa International Airport Khaled Al-Shayef.

Asked about the reasons for derailing the push for flights to Cairo and whether the issue will be resolved, Shayef told the Yemeni American News: “There are no current initiatives to resume flights to Cairo although there is no justification for this situation.”

Shayef said the airport is able to handle all the agreed-upon flights and even up to 50 flights daily – the pre-war level.

Bottom line, the reopening of the Sanaa airport is a humanitarian issue guaranteed by international law that prohibits the use of civilian airports and ports for military purposes. Advocates say the blockade and restrictions on the airport do not target one side. Rather, the blockade harms nearly 80 percent of Yemenis, who live under the rule of the Sanaa-based government.