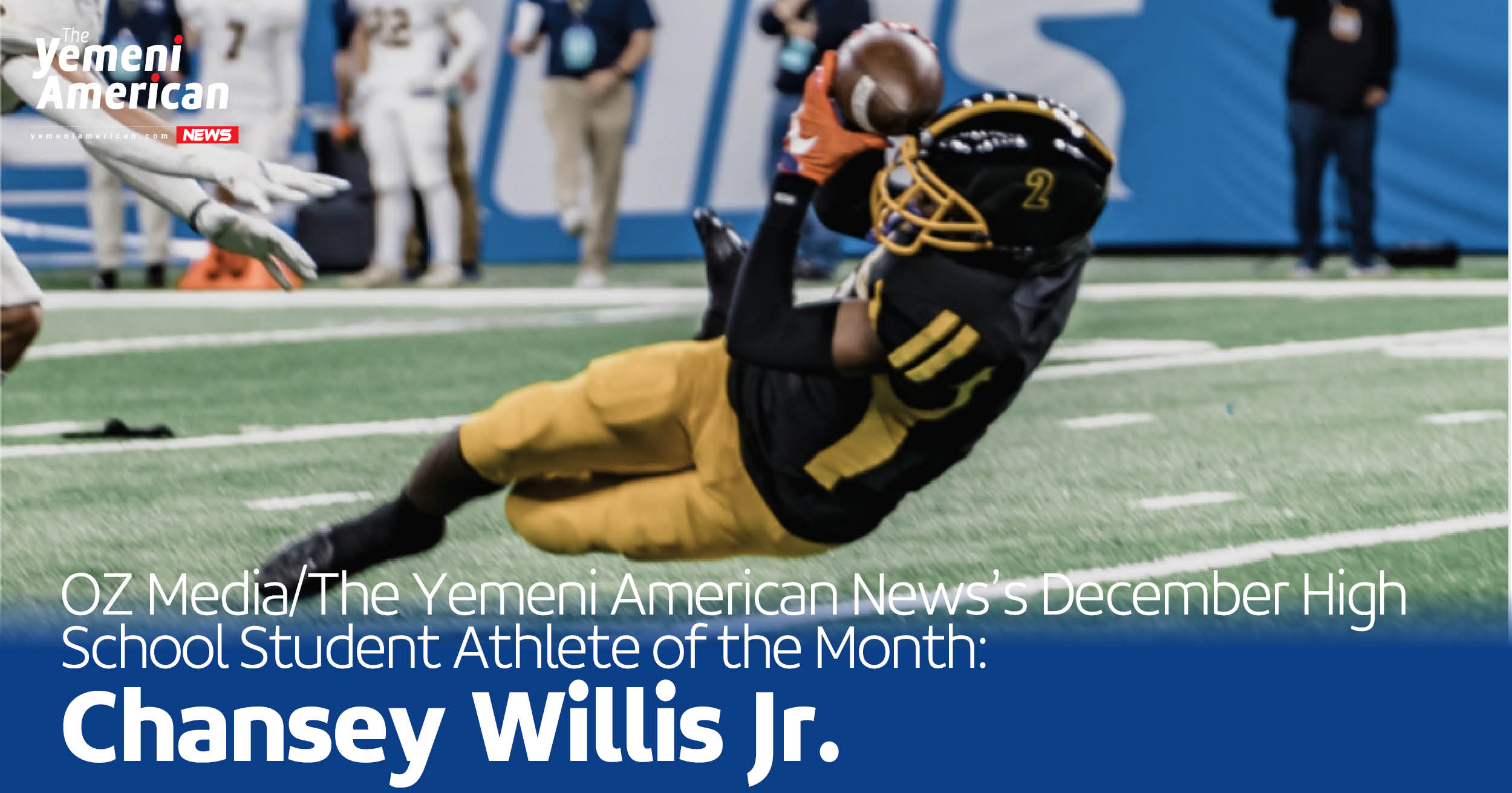 OZ Media/ The Yemeni American News is proud to present the December High School Student-Athlete of the Month award to Chansey Willis Jr. out of Martin Luther King High School.

Chansey Willis is a two-sport athlete; he currently plays basketball, and just got done playing football, for Martin Luther King (MLK) High School. Chansey currently holds a 3.6 grade point average. It’s fair to say he is doing his job both on and off the court/field.

Chansey was a starting receiver for Martin Luther King High School. He finished his senior season with 32 receptions for 636 yards and 7 touchdowns. Most importantly though, Chansey helped MLK High School take home the Division 3 Football State Championship, which was plated at Ford Field last month.

“Chansey is a great kid to coach and to be around every day,” Coach Spencer said. “He has natural instincts that you can’t teach. Chansey also has great ball skills and a nice combination of speed and strength that makes him hard to cover. We love Chansey Willis.”

Carol Bush is Chansey Willis’s mother. We all know that all mothers love their kids, but what Carol does for her children is pretty remarkable. She not only attends all of her kids’ games, but she’s even there for the practices, fundraisers, extracurricular activities, etc. She is definitely the team mom, and she always puts her kids first.

When we asked Carol what’s the one thing that makes her most proud about Chansey, she said, “His heart! I’ve always tried to keep him around good people. In turn, he actually genuinely cares about people.”

Chansey also notices the hard work his mom puts in not only with him, but with his other siblings as well. When we asked Chansey who inspires him to be great every single day, his response back was simple: “My mom. I grew up around my mom and I see her do everything. So, I do what she wants me to do because that’s the right thing to do.”

If you thought Chansey was doing big things on the football field, what if I told you the sport he’s actually more known for is basketball? What if I told you that Chansey is up for contention to win the Mr. Basketball award for the state of Michigan? You don’t believe it? Well, here are some of Chansey’s basketball accolades over the last couple of years heading into his senior season:

-As a junior, he averaged 23.5 points while adding 7 assists and 6 rebounds per game

George Ward, who is the head basketball coach for MLK High School, said Chansey is a great player because of his, “overall toughness, leadership and ability to make others better.  His ability to score the basketball has been evident by averaging 23.5 points per game last season. But also, his humility and sportsmanship is very rare for someone with such a skill set.”

We then asked Coach Ward what made him most proud about Chansey, he said, “There are so many things that have made me proud of this young man. To begin with, in an era of high maintenance young people and families, he’s truly been a willing part of the group and that makes everyone love and appreciate him even more.”

Coach Ward then added, “From an athletic perspective, he’s continued to get better through his work and willingness to be coached.  When this is all over, he’ll truly be missed. But just as the previous graduating classes, his presence will remain and we’ll all be better because of it.”

It’s safe to say Chansey is a leader of his team, and mamma Carol agrees. When we asked Carol what makes Chansey such a great leader, she said, “He’s selfless! He’s positive! He’s going to encourage you! His personality is so contagious! You’re going to love him! He’s just so unique! Him and his siblings are all like that in their own way.”

What’s Next for Chansey Willis

After high school, Chansey wants to go to college to continue his education and to continue to “succeed in life.”

When we asked what his “Plan B” would be if sports weren’t an option, Chansey’s response was, “If I don’t play sports I want to be around sports. For example, sports management, commentating games or something like that.”

We asked carol what advice she gives Chansey, and the rest of her kids, whenever they are feeling down and out. Her response was, “Crying and talking helps you feel better. Take some time to think, process, and let it all out! Then, get up and make it happen! They all know that they must get it done, despite any circumstances. Life happens and you just push through. Bet on yourself!”

From the folks here at OZ Media and The Yemeni American News, we want to once again say congratulations to Chansey Willis for being December’s high school student athlete of the month. We hope you have an outstanding basketball season for your senior year Chasney Willis Jr.!

Here is the full YouTube link to Chansey’s Interview with OZ Media: