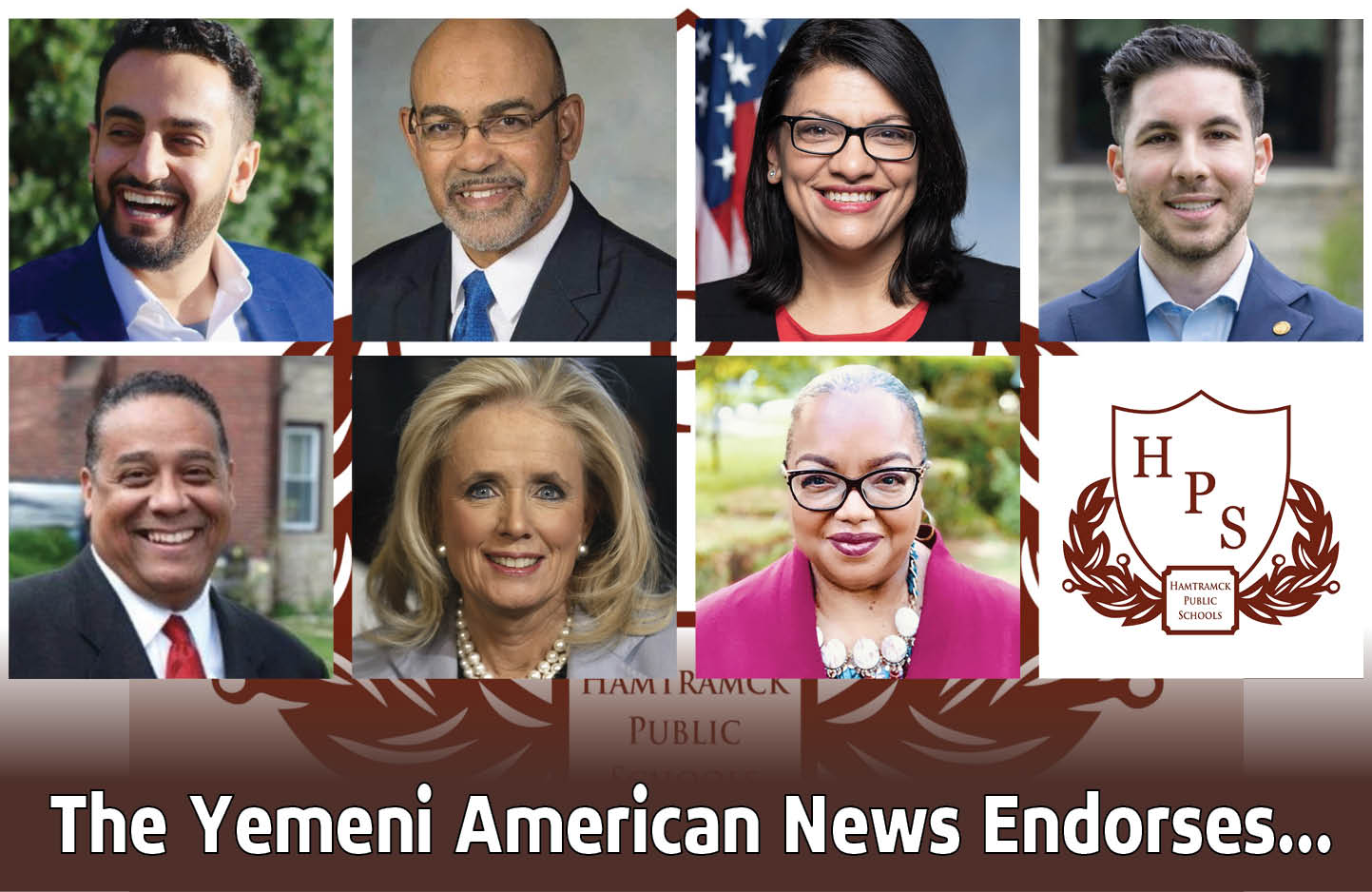 Even we have to admit that it’s been one of the rockiest election seasons in recent times. On the federal level, the future of the country depends on a polarizing decision for every American citizen. In the local areas that we cover, like Hamtramck and Detroit, vitriolic competition has captured the debate surrounding who steers our institutions into the coming years.

Elections are for picking the best person for the job, the best direction for schools and criminal justice, and the best way to move forward. In a way, this is the revolution that changes leadership every term. So to make sense of our coverage and our stance on the issues, we’ve included who we think are the best for the future.

The Editorial Team at the Yemeni American News didn’t compile this list to tell you how to vote in August and November. Nothing will replace your research on the issues that you care about. Still, we’ve have done our research and feel that there’d be something missing if we didn’t make any endorsements.

THE LOCAL: Hamtramck, Dearborn and Detroit.

It’s no secret that we’re in support of the bond. Education is something that everyone should care about, even if we have different opinions about how it should be done.

We’re voting yes on the Hamtramck Public Schools Bond 2020 because we’ve seen the state of the district. We’ve heard testimonials from students and staff, and we’ve heard every argument there is for and against the bond.

Students aren’t just uncomfortable with the way things are in the district, they’re reporting sickness from overheated schools and deplorable facilities. Staff are nervous about the state of the portable classrooms near Dickinson East. We have students that need to learn in the 21st century if they ever want to contribute to the 21st century.

There’s been a lot of arguments against it, like the fact that the rate of poverty in the area may not justify such a large bond. But it still begs the question, is keeping educational quality low the right solution to poverty?

In the American Dream, generational wealth is accumulated through a quality education. And we support that.

He’s not only the best for the job, he’s one of Hamtramck’s own. Abraham Aiyash is a dynamic character in politics who’s been able to show up in Southeast Michigan’s progressive political scene. We think he’s the best for the job because of his continued support for the issues, his connection with the late representative Isaac Robinson, and his refreshing and youthful idealism.

Aiyash has been involved with Hamtramck throughout his entire life. Having grown up in the city, there’s always knowing that the city’s most pertinent interests will be represented in Lansing. His progressive platform is part of the broader move that this country needs toward a more equitable culture and economic system.

Make no mistake, there are a lot of great candidates in the race for Isaac Robinson’s seat. And while the decision on who belongs in that seat was difficult, we realize there’s no better person for the place in Michigan’s Capital than Abraham Aiyash.

Don’t fix what isn’t broken. Abdullah Hammoud has been in the news as one of the most decorated public health advocates the Michigan House of Representatives has to offer. Throughout the past few months of this term, he’s introduced consumer protection initiatives and bolstered prescription drug access throughout the height of Michigan’s epidemic.

We support Abdullah Hammoud’s re-election because of that professionalism during the COVID-19 Pandemic. In such an uncertain time of American history, Hammoud is a refreshing actor of reason.

The circumstances of this time period in US History has demanded change for the criminal justice system. It’s our belief that there are two great candidates running who are positioned well to steer that change. Because in a city that’s 80% African American, we do need better.

But what a lot of people may not have seen is a proactive approach to change that Kym Worthy has actively steered since before she was Wayne County’s Chief Prosecutor. Looking all the way back to her first major assignment, when she successfully prosecuted the police who killed Malice Green, Worthy claims this was the first example of police being successfully prosecuted for police brutality.

Criminal Justice is a precise act that requires equity for the accused and justice for the abused. Worthy has shown, through policies like the Conviction Integrity Unit and the bolstered Special Victims’ Rights that her office can skillfully navigate all of the 21st century’s demands on one of the most archaic professions in the United States.

Another hotly debated process in the city of Detroit has been its financial obligations. Very recently under Emergency Management, the city holds a responsibility to the people on both sides of Woodward and on both sides of the Aisle in Lansing. Above any other city in Michigan, Detroit is held under careful watch.

A worse treasurer would call for sweeping reform that balances the budgets at the cost of Detroiters’ dignity. Under the direction of Eric Sabree, the Treasurer’s office has been able to preserve dignity while maintaining progress on the region’s finances.

It’s not only that Eric Sabree is the highest American Muslim holding an elected office in the State of Michigan. It’s that he’s available for the challenges of everyday life, like his help in events like Hamtramck Public School Public Forums. His work to preserve the financial stability of families through various initiatives has also built an important relationship with every home in Wayne County.

Throughout the George Floyd Protests, the City of Detroit showed a different protest than the rest of the country, and even the rest of the state. Detroit didn’t see any violence. Sheriff Benny Napoleon says this may be because of the goals that initiatives like community policing have corrected.

ON THE NATIONAL STAGE:

Michigan needs all the progressive help we can get. Although Congressperson Debbie Dingell may not be the text-book example of a powerhouse progressive, her work has shown a clear understanding of the issues at play in the State, Nation and World.

In 2019, Dingell opposed a bill that would condemn the Boycott, Divest and Sanction movement against the State of Israel, preserving free speech and maintaining the effort as a legitimate act of opposition to Israel’s occupation of the Palestinian People.

For many career politicians, the work can outline a candidates difficulties in office. For Dingell, the opposite has happened as her focus on democratic policy has been sharpened with time.

Standing truth to power is all in a day’s work for this powerhouse of a Congress Member. Rashida Tlaib has made her mark in Washington as one of the seminal members of a progressive wing of democrats going up against some of America’s oldest institutions, and even the president himself.

Although Tlaib’s stance on the Israeli-Palestinian conflict has drawn the criticism of many pro-Israel Americans, people within her district report an exceptionally devoted leader to the area’s challenges.

Making history was part of the role that Tlaib, Alexandria Ocasio-Cortez, Ilhan Omar and Ayanna Pressley have all taken an essential role in shifting the American political conversation. Now that there’s some progress, we support another term for Rep. Rashida Tlaib.