The quality of good leadership reaches beyond the title Mayor. It involves surrounding one’s self with quality, more than capable people driven by high standards. It’s called the delegation of responsibility. Mayor O’Reilly has done just that.

Mayor O’Reilly’s performance as leader is also measured by accomplishments throughout his administration. For example, undoing the sordid legacy left him by the previous administration. Burton Katzman never fulfilled its contractual obligation of building a second multilevel parking facility. Paid for by Dearborn taxpayers. That added building is now a reality.

Mayor O’Reilly worked cooperatively with Ford Motor Company development of the commercial district on Michigan Avenue. Bringing new businesses to the area, and added revenue to the city coffers.

Acquiring the new administration building translated into operation efficiency that saved taxpayer’s the higher operational cost of old city hall. And turning old city Hall into Art Space is a magnet for a new, bright generation of talented people in the city. 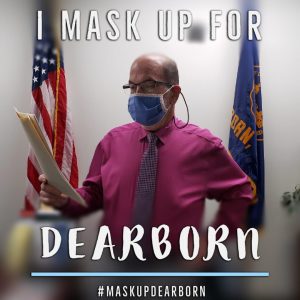 Again, with the mayor’s collaborative effort, the new, state of the art train station makes Dearborn a destination city. A hub for business activity. The same point applies for the expansion of University of Michigan campus, and Henry Ford College’s expanding trade school system.

In south Dearborn, the newly designed and developed thoroughfare in the commercial area made traffic, vehicle and pedestrian, safer to navigate. Retaining the Lapeer Park and pool serve as a much-needed place of recreation for children in the neighborhood.

With regard to the Covid-19 issue/problem in Dearborn, aside from the um and aahs political agenda of naysayers, Mayor O’Reilly clearly stated his position that city block parties would not be authorized during the pandemic. He was equally clear that the risk takers in our city are responsible for the climb of coronavirus numbers. Making the virus worse than need be. O’Reilly supports the governor’s requirement that masks be worn and social distancing be practiced when entering business establishments.

Innuendo aside, Mayor O’Reilly has done and continues to do an exceptional job leading the city. He has done so without lining his pocket; pay to play was never a part of his business model for Dearborn. I have a deep respect and support for Jack, and all that he has done to take Dearborn into the 21st century.