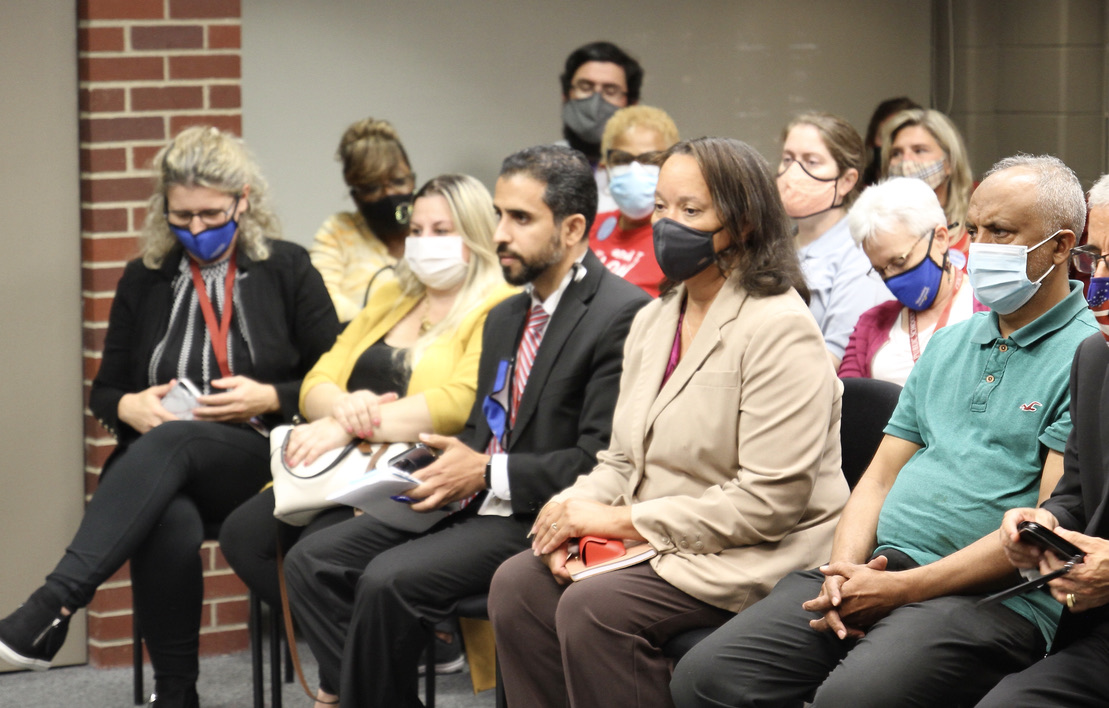 HAMTRAMCK, Mich. – In a statement made through Facebook and the district website, Hamtramck Public Schools Superintendent Jaleelah Ahmed announced that she will be taking a leave of absence to address her wellbeing.

“The decision to temporarily step aside was not entered into lightly,” Superintendent Jaleelah Ahmed wrote in her memo to the district. “Nor is it easy to be openly vulnerable with you. I must address my own physical, mental health and wellbeing. During my absence, the Board of Education will appoint an interim superintendent who will have the full support of the entire team at Hamtramck Public Schools.”

“I would like to say this, it takes everybody in here, all stakeholders, teachers, Union, the board, parents, full transparency and working together to tackle all these issues that may be,” Nagi said. “But there’s also a lot of great things that we’re going to build on.”

Nagi is the English Language Director for Hamtramck Public Schools. He’s worked as an administrator for several years. Before taking on the role as Acting Superintendent, Lynem served HPS as the Chief Financial Officer.

At the Oct. 13 meeting, the Board of Education announced that the responsibilities of the Superintendent will be shared as equitably as possible between the two administrators.

“I would just like to thank the board for having the confidence in myself and Mr. Nagi to help lead the district,” Lynem said. “As always, we’ll do our very best for the kids. That’s what we’re all here for. And I know that sounds cliched, but it’s probably the most important thing.”

The district is having a difficult time since students have returned to classrooms. Over the past three months, the district has seen 30 resignations, according to listed Board Meeting Agendas. Currently, Hamtramck Public Schools is hiring for 43 positions, 20 of which are for teachers in the district.

A stated reason for the resignations has not been made available by Hamtramck Public Schools. However, Toni Coral, president of the Hamtramck Federation of Teachers, says that this is due to inconsistent decisions on the part of district administration.

The rationale, Coral explains, includes several misguided transfers – the process by which a teacher is taken from one instructor role to a different one – and issues with communication between teachers and district administrators.

“They’re leaving because they saw what was happening around them,” Coral said. “And they said, ‘yeah, no, this is not good.’ So they started sending letters to the board directly, their resignation letters. And then the board started hearing.”

Throughout public comments, HPS staff members talked about internal candidates within the district being overlooked for administrative roles and stalls in talks with the Federation of Teachers.

Many relayed messages from former colleagues in the district who wrote letters upon their resignation.

“I do not believe that the decisions that are being made are in the best interests of the kids that I care so deeply about,” wrote one letter writer whose message was stated in the public comments.

While the Superintendent is on her leave of absence, the Board of Education talked about their choices for the duties of the Acting superintendent. Drawing from administrators who have been with the district for many years, Board of Education President Jihan Aiyash wanted to convey the board’s full confidence in Nabil Nagi and Sherry Lynem.

“The Board of Education did not make their decision lightly and could not think of a better set of people to take lead while the superintendent is on her leave of absence,” Aiyash said.