Mamoon Aldais reflects on his dangerous journey through land, sea, and air to unite with his daughter in the U.S. 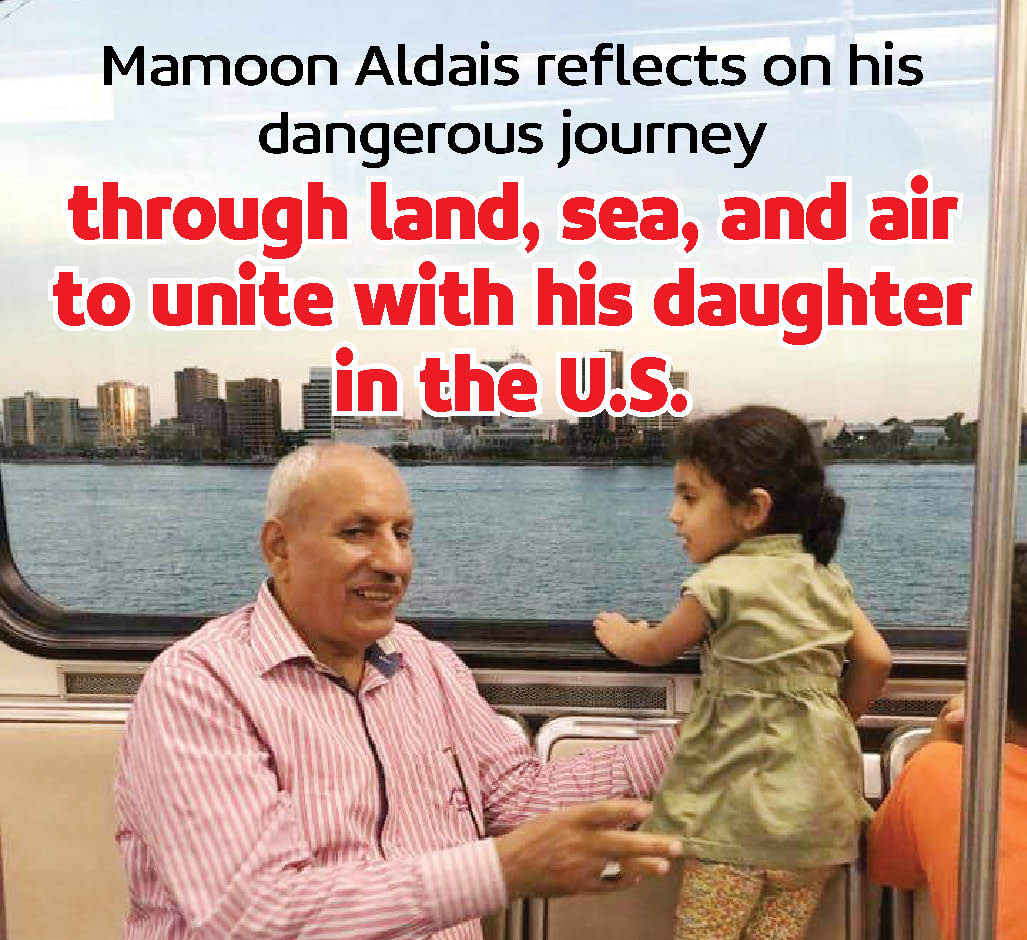 The 62-year-old Mamoon Aldais didn’t think that his trip to the United States to unite with his daughter and grandchildren would be very dangerous that he might have sacrificed his life for it. It’s a journey taken by Aldais from Yemen to the land of the dreams, the United States. 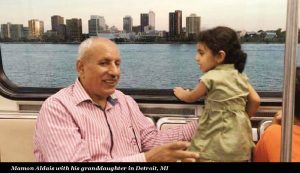 His journey exemplifies the hardship that Yemenis nowadays go through to visit families in the U.S. or migrate to the Uncle Sam country. Aldais narrates his travel story to the Yemeni American News after leaving the U.S. back to his home, Yemen.

His trip began in his hometown Ibb heading to the Southern city of Aden (200 kilometers away) taking the rural route rather the main one; avoiding any checkpoints or areas of conflict. Taking the alternate route took more time to get to Aden passing through rigid roads which included high mountains and deserts. He says “by the time we got to Aden, the biggest ship at the port leaving to Djibouti which is called ‘Saeedah ship’ was full; and authorities told us we have to take a smaller boat. We left Aden after dark.”

The boat of death
“It was a harsh journey; a ruthless one” Aldais sighs and explains his journey. He adds “We held on to the floor of the boat with our bodies and prayed continuously to be spared by the rainstorm. When it heavily rained and the boat was hit by waves, some of us became nauseous, and you could hear the voices of women and children chanting with prayers. It was truly a frightening ride. The storm stayed for about an hour until we arrived to the shores of a small island called Abagh where it’s similar to a checkpoint where those who didn’t have proper papers would be returned back to Aden. We then stayed on the island for about four hours; eating the remaining food we had and took a rest until the waves calmed and took the boat again until we arrived to the shores of Djibouti about midnight. Along the way, some of us slept and others didn’t. At the port, buses with Yemeni Embassy’s representatives were present and offered us juice and water taking us to the Passports agency to take care of all the proper custom orders. While people were in line to do the fingerprinting, the machine broke down and we had to wait until 4 am for it to be fixed. Our papers were lost due to the change of shifts and we had to wait until the afternoon until we received our papers from the port’s officials who were working the night shift. 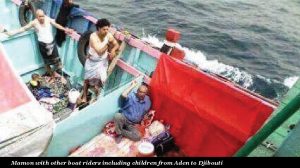 Port of Dijbouti
Aldais describes his experience at the Port of Djibouti saying “When we arrived at the Embassy the next day, the passport manager was a female officer being the only operator who controlled the gates of the port. Every person must pay a hundred dollars for a fare trip.” He adds, “there were many Yemeni brokers who would help the people there in exchange for a lump sum of money. We used their help and left the port after receiving a list of needed documents that we need to present to the Port authorities.”

Aldais describes the capital of Djibouti as secure, stable and safe despite the limited resources of the (Djibouti) State, which is surprising to some, at least compared to the situation in Yemen. “It was a beautiful day, where we met people from all provinces, most of them were from the province of Ibb”

The trip to the U.S.
After a few trips to the Embassy, Mamoon Aldais finally received his visa after having an unforgettable time in Djibouti remembering his dangerous trip to the shores of Djibouti as he’s on the sky toward Chicago’s O’Hare International Airport. His friends and family received him and drove to Michigan where he finally was reunited with his daughter and his grandkids. Aldais returned to his country, Yemen, but the return journey was through the air; to avoid the repetition of the dangers and troubles of the previous trip. As Aldais reflects on his trip, he says “it was all worth it to visit my daughter and grandchildren as well as seeing the land of dreams despite the dangers”