In an election year, the pandemic becomes the message for Whitmer and Trump. 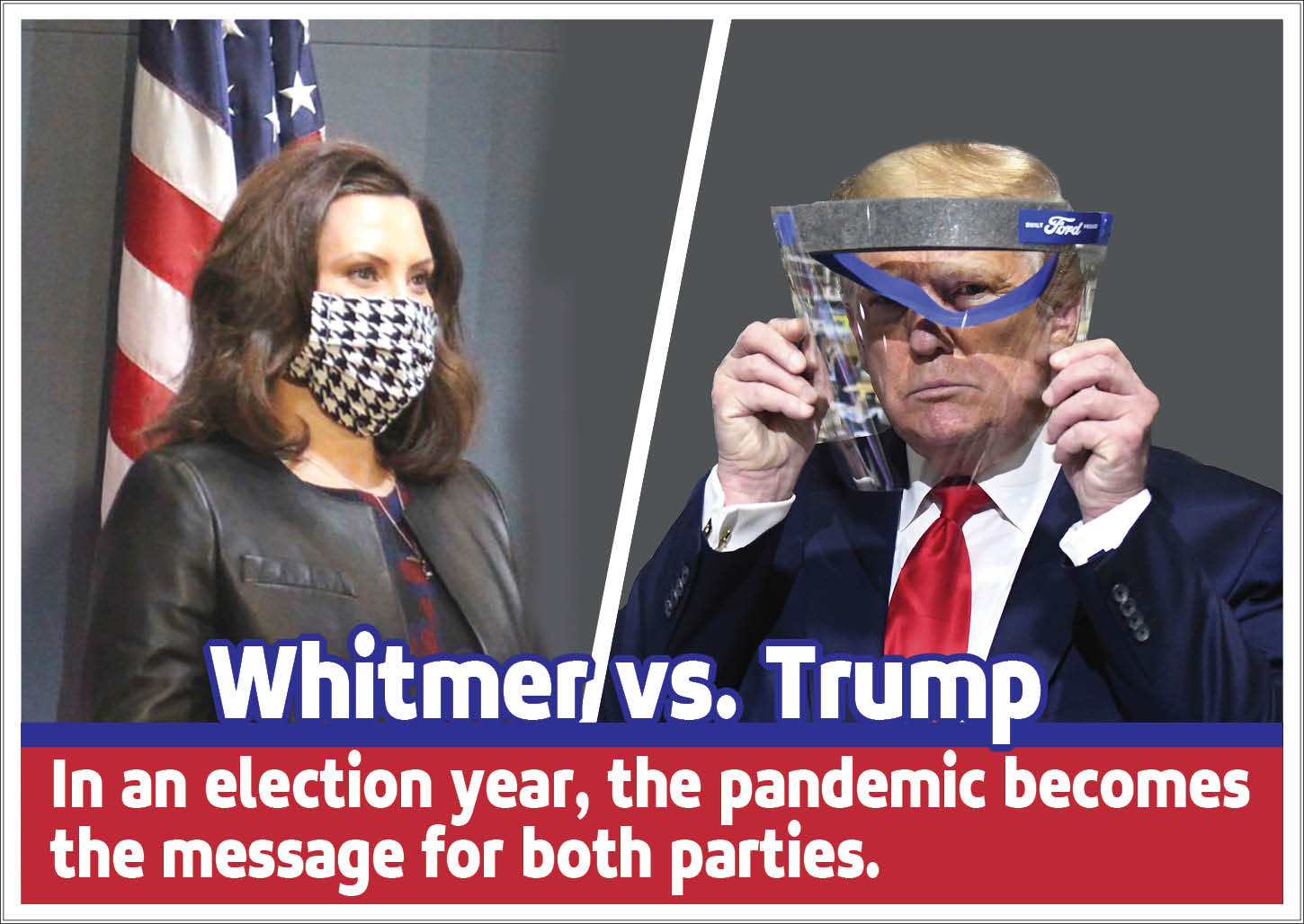 Lansing, Mich. – It’s been a mean past few months for politics. The National discourse has settled the coronavirus issues based on party lines – democrats for science and public safety, republicans for liberty and economic sense. Central to that debate is the State of Michigan, where Governor Gretchen Whitmer has needed to lead 10 million people through what was one of the first notable hotspots for COVID-19 in the nation.

Gov. Whitmer isn’t a stranger to the spotlight. In January, she was chosen to give the Democratic Party’s response to President Donald Trump’s State of the Union. Her statements on behalf of the party rallied for a more progressive agenda in the United States. And of course, she fought back against Trump’s political tactics.

But it’s a different story now. Over 100,000 Americans have died as a result of COVID-19 complications since those statements were exchanged. Globally, the number is even more abysmal, with 350,000 people dead. The political leaders aren’t playing games anymore.

One of the biggest challenges for Gov. Whitmer during this crisis has been the backlash from protesters and Republican Leaders. In an effort to rally his supporters in Michigan, Trump has been a vocal supporter of any demonstrations against the Governor’s response to the crisis.

On Apr. 17, the President famously tweeted a call to action to his supporters – “LIBERATE MICHIGAN”. It’s a move that drew serious criticism from the Democratic side of Washington, and may have even inspired some of his supporters to draft death threats against the Governor.

The Majority vs. the Staunch Dissent

According to a poll published just one week ago by the Detroit Regional Chamber of Commerce, a slim majority of Michigan residents who responded say that they support Gov. Whitmer’s response to the Coronavirus Pandemic.

In the media, however, many people outside the state could be led to believe that Michigan is vocally against the Governor. Groups like the Michigan Conservative Coalition, and Michigan United for Liberty have made a huge effort to mobilize people who are against the governor into regular protests near the state’s Capital Building.

Michigan United for Liberty is an independent, issue-based organization according to Spokesperson and Board Member of MUL, Adam de Angeli.

De Angeli has been an organizer for some of the major protests in the news. For him and many others, he’s worried about the impact of Governor’s response.

“The point of [the protests], I think, at least in the beginning was just to vocally oppose the shutdown,” de Angeli said. “And show that there was real support for people to get back to the normal constitutional order.”

President Donald Trump has been a vocal supporter of protests organized by groups like Michigan United for Liberty. In a way, he’s seen the reaction to his Coronavirus response by Governor Whitmer as an opposing force to his efforts.

Recently, President Trump has been making a point of asserting his authority over the Governor and her administration. At a visit to a Ford Motor Company factory, he made sure that press officials wouldn’t see him in a mask, something that remains a serious issue for Gov. Whitmer’s efforts.

The political exchange of harsh words deals with more than just the coronavirus response. When Michigan’s Secretary of State announced that she will be mailing absentee ballot applications, the President made what many believe to be inaccurate statements about the risk of voter fraud over mailing applications. He even threatened to remove federal funding from emergency response in the State of Michigan.

In the Context of an Election Year

Prof. David Dulio is Professor of the Political Science Department and Director of the Center for Civic Engagement at Oakland University. Many of his classes deal with elections and political interests. According to Prof. Dulio, the coronavirus response may have been vastly different if it wouldn’t have happened during an election year.

President Donald Trump is running for re-election in November. Many pundits have said that if the economy’s downturn during the pandemic doesn’t change directions soon, then the President may lose one of his main leveraging points to voters.

So for the president and Democratic leaders, much of the political discourse has been about maintaining their support for a good turnout during this November’s election.

“It’s just another example of how both political parties and their leadership are in their own corners and they’re not they’re not coming, they’re digging in,” Prof. Dulio said. “The strategies and tactics that the President uses appeal to his base. And when his opponents fire back, that appeals to their base. So I think a lot of this is about activation of base politics.”

Michigan is an essential swing state. In order to win, a presidential candidat will desperately need the support of Michigan’s majority. And as election day approaches, we may be seeing more of the same efforts to win over the state.