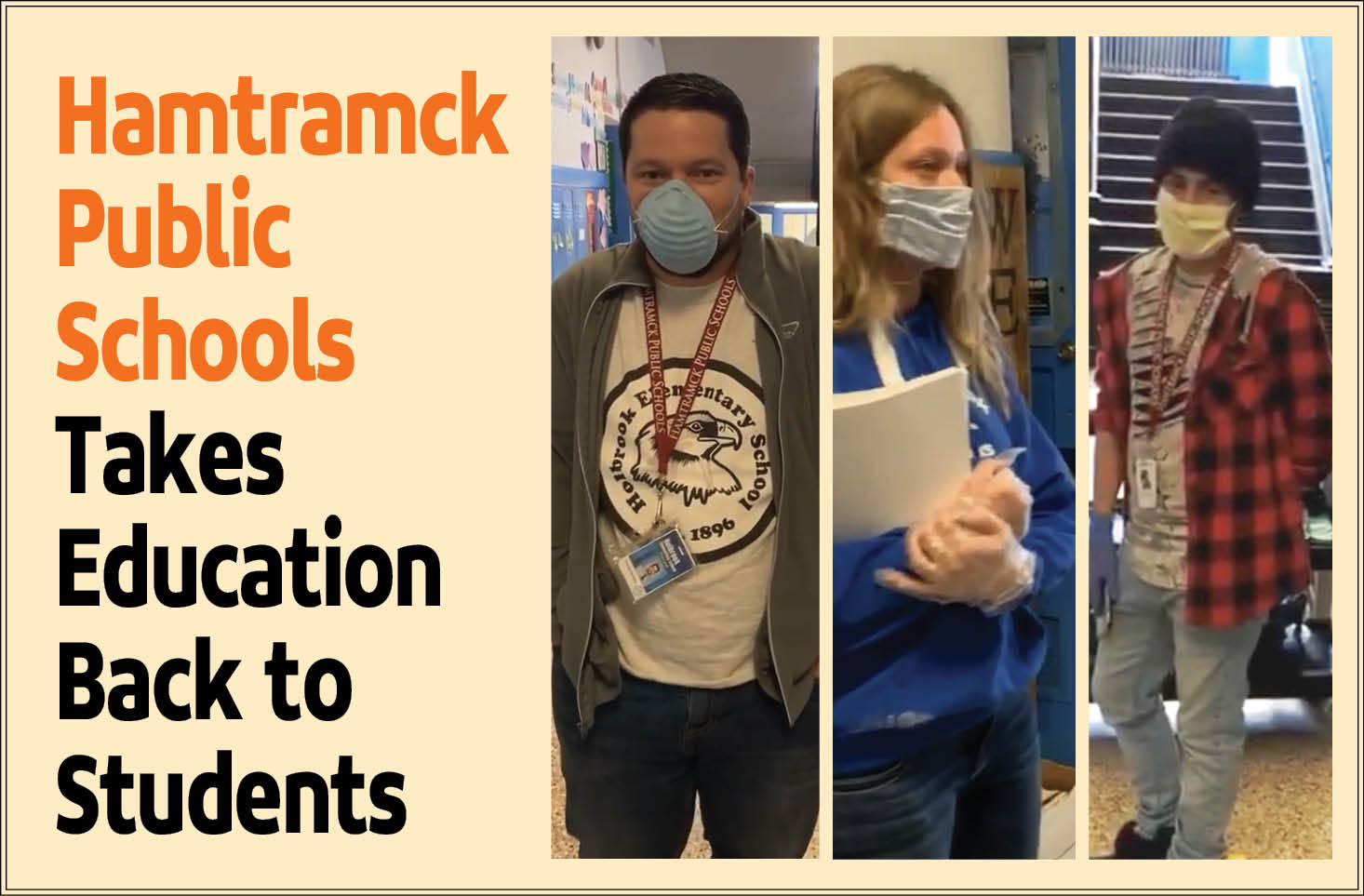 Hamtramck, Mich. – If you looked at the Coronavirus Plan for Hamtramck Public Schools, you’d know how ambitious it was. A month ago, the plan got approval from the State of Michigan. It involved a comprehensive strategy for bringing every student into digital learning.

Every student who didn’t have one could borrow a Chromebook, and lessons would be fed through the ClassDojo, Google Hangout, and Google Classrooms programs. The education of Hamtramck’s children would go back to a running pace, but there was only one problem – almost half of households in the city don’t have internet connection.

It’s a digital divide that’s well-documented in the Detroit area. People who don’t have internet access are less-likely to be able to pursue a strong education, their ability to look for jobs is impeded, and according to an Obama-era official, they’re even less likely to participate in the democracy of the 21st century.

For administrators in Hamtramck, this was a challenge.

The Superintendent of Hamtramck Public Schools has carved a name for herself in a historically significant school district. Although Superintendent Jaleelah Ahmed is only in her first year of leading the district, she’s become almost famous for her straightforward problem solving and dedication to moving the school district into a student-centered direction.

Before the COVID-19 Pandemic hit, Superintendent Ahmed’s efforts were focused on updating the aging infrastructure of the School District. At Dickinson West Elementary School, ten classrooms were outside the school in portable structures, among other, aging issues in the district’s buildings.

Just before the first cases were found in Michigan, the School District was planning a vote in order for the city’s taxpayers to decide whether they wanted to support the school’s efforts to update its buildings. Because of the pandemic, the election had to be moved from May 5th to August 4th.

When Superintendent Ahmed was first introduced as the new leader of Hamtramck Public Schools, she had already spent decades working in the field of education. Now that her leadership is being tested to its extreme, she’s been able to create an emergency learning protocols that’s on-par with some of the most privileged school districts in the state.

In order to get through the statewide lockdown, she says one of the keys to successfully making it through this is “understanding and recognizing the talents of people that [she] works with.”

“I’m very grateful I work with so many talented people,” said Superintendent Ahmed.

The Master Plan for Education during Coronavirus.

Near the middle of April, the Governor of Michigan announced the end of in-person classes for the rest of the 2020 school year. Many school districts had already prepared some alternative model for education, but school districts in high-poverty communities like Detroit and Hamtramck needed to mobilize every effort to continue educating their students.

50.9% of families were living at or below poverty in Hamtramck as of 2017, according to the American Community Survey. This means that the ability for families in Hamtramck to contribute to the school district is much more limited than other cities in Michigan.

In order to come up with a plan, Superintendent Ahmed says the school district needed to accurately understand the School District’s challenges. Challenges like language barriers and the question of poverty in the district had to be frankly assessed.

“We had to really figure these things out and be very intentional,” said Superintendent Ahmed.

The process of developing the continuing education plan was coordinated among teachers, principals, union leaders, central office employees, and School Board Members from Hamtramck Public Schools. For part of the planning. the District looked at plans from three different districts in three states. By April 8th, Hamtramck sent their plan to Lansing for approval.

The plan included the ambitious Chromebook laptop for every household – along with an extra Chromebook for households with three or more children in school – and a means for getting internet access to every family who needed it. Videos were also made to walk the families through using the Chromebook.

Executing the plan was another challenge, involving mass surveys, wellness checks, and coordination on a massive scale.

“We wanted our families to know that we’re there for them, and what they don’t have, we will provide,” said Superintendent Ahmed.

Michigan leaders have proposed a budget cut to Education of more than $2 billion that would normally be spent in the state-wide School Aid Fund. Although it hasn’t been approved yet, the funding cut would affect districts like Hamtramck the most, who depend on the funding for programs like school lunches.

According to Superintendent Ahmed, that could mean a loss of up to $2,000 for each student’s education and welfare. And for many families, the services that the School Aid Fund are essential.

The Novel Coronavirus Pandemic has affected nearly every facet of life in the United States, and most other countries in the world. And if a budget cut like this one came to pass, Education may need to radically change – for better or worse – in order to recover.