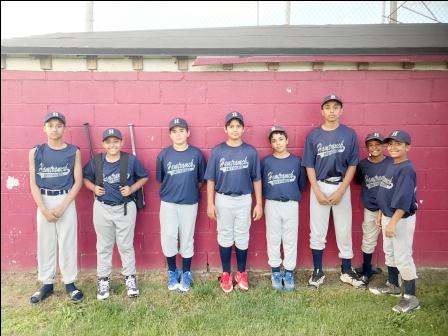 Ramadan is the holy month where Muslims fast from sunrise to sunset.

For the past three years, Ramadan has landed during the months of May, June and July. In America, these months typically consist of the longest days of the year.

For the past three years, Muslims in America have been fasting for about 17 hours in the day for a month straight in scorching temperatures.

During this time of year, the Detroit PAL baseball league also kicks off. For the 12-and-under Hamtramck Greyhounds baseball team, this means playing in the hot sun for a month straight without having any food or water in their bodies for most of the day.

From the 14 players that are on the Hamtramck Greyhounds roster this year, 8 of them are Muslims. There are 6 Yemeni Americans, one Bengali American, and one Palestinian American.

There are four coaches on the roster as well. Three of the coaches are Yemeni American, while the other is African American.

With all of that said, if you ask any of the players or coaches if fasting during Ramadan has had any effect on them, there answer would simply be “No.”

Assistant coach Muhammad Thabet said, “When Ramadan comes around the kids already know what to expect and how to prepare themselves for it.”

Thabet then added, “Fasting seems like it doesn’t have that much of an effect on the players anymore. They may be a bit more tired than usual. When it comes down to performance though, the success speaks for itself.”

The success coach Thabet is referring to are the recent achievements the Hamtramck Greyhounds baseball team has accomplished over the last couple of years.

Two years ago (first year playing baseball as an organized team) the Hamtramck Greyhounds had to play seven out of their 14 games during Ramadan. That year, the team had an 11-3 record and finished the season in second place in the 10-and-under Detroit Pal recreational baseball division.

Last year, the team had to play 9 out of their 15 games during the month of Ramadan. The Greyhounds finished the season with an 11-4 record and won the Detroit PAL 12-and-under recreational baseball championship.

This year, the team is in an even more competitive division under Detroit PAL. They will have to play 5 out of the scheduled 14 games during the month of Ramadan. All of that doesn’t worry assistant coach Adnan Abdullah.

Abdullah said, “As coaches we make sure we reach out to the parents whose kids are going to be fasting and let them know that their child has to eat a healthy breakfast and drink lots of water during suhoor time (the time where Muslims eat before sunrise, which marks the beginning of the day of fasting).”

Abdullah then added, “When it comes to preparing the players to perform on the field, we coaches take care of the rest.”

The players seem to not be phased about playing during Ramadan as well.

Mohammed Islam is a Bengali American who goes to school at Caniff Liberty Academy, which is located in Hamtramck, Michigan. He plays left field for the Hamtramck Greyhounds.

When Mohammed was asked what is the most difficult part about playing baseball during Ramadan, he said, “Trying to make sure you have enough energy to play for the whole game.”

Mohammed then added, “There’s really not that much of a difference of playing baseball during Ramadan and not during Ramadan. You just have to go out there and play with confidence and you’ll be fine.”

Ali Abdullah, who is a Yemeni American, goes to school at Hanley International Academy, which is also located in Hamtramck, Michigan. Ali plays catcher for the Hamtramck Greyhounds.

When he was asked what is the most difficult part about playing baseball during Ramadan, Ali said, “As the catcher, you have to put on all of this equipment to protect yourself from getting hit by the baseball. So it’s kind of hard for me to play catcher because it gets really hot with the equipment on, and I can’t drink water to help boost my energy because I’m fasting.”

Ali later added, “I don’t think fasting affects me that much though because I really love the game and I would do whatever it takes to play baseball and win.”

These young 10, 11, 12-year-old boys should be an inspiration to us all. That no matter what obstacle you may have to overcome, as long as you’re doing what you love, then nothing else should matter.