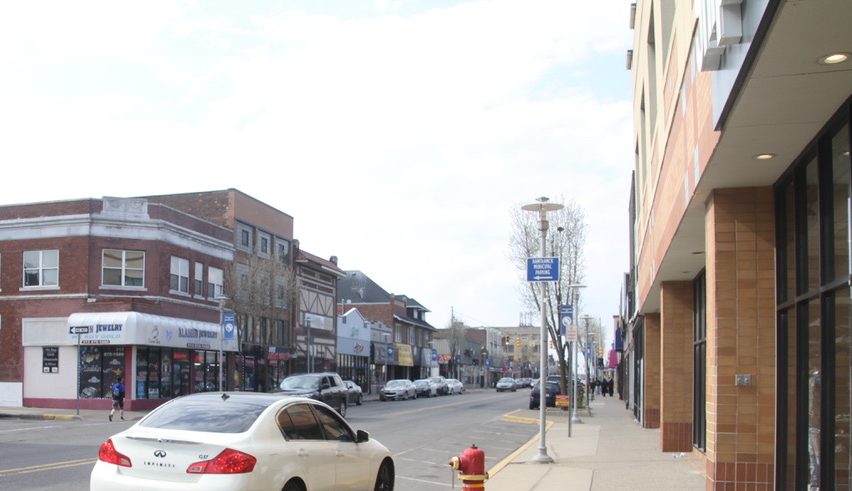 HAMTRAMCK, Mich. – Over the weekend, dozens of women shared their stories of street harassment around Hamtramck over the popular Facebook group Hamsterdam – formerly known as Hamtramckans. The comments detailed horrifying acts of violence that certain men perpetrated against women, including abduction attempts and threats of rape. Most women in the comments reported being followed and propositioned for sex as well.

As a result, Councilman Ian Perrotta proposed a resolution for residents to consider adding catcalling to the city’s language governing disorderly conduct. Responses to the proposed resolution ranged from support for the move, to concern that it would disproportionately criminalize the behavior of people of color – citing disproportionate legal ramifications for nonwhite Americans. 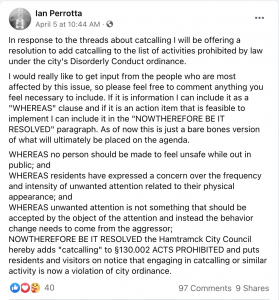 In a Facebook post, Councilman Perrotta says the current iteration of the resolution is only a bare-bones idea for city council’s addressing the problem. He asked for input from people most impacted by street harassment, so the city council’s role in trying to find a solution is likely to change by next week’s city council meeting.

Councilman Perrotta did not respond for comment in time for publication.

What Happens in Hamtramck is Not Unique to Hamtramck

Street harassment and violence against women is an international problem, with no culture or country completely innocent in this behavior. Still, many Hamtramck women report feeling unsafe in their own hometown as they go for walks, run errands and even go to medical appointments.

At one point in 2017, two women were abducted within the same week in Hamtramck.

Lynn Blasey is a Hamtramck resident who says she’s being proactive about this issue, even signing up for a Bystander Intervention Training session with a local street harassment prevention group. Like many women in Hamtramck, she says she’s been made to feel unsafe as she’s walked in Hamtramck and its surrounding area.

In a conversation with the Yemeni American News, Blasey detailed a story in which a car drove slowly next to her in the harsh winter months. The man, who was driving a pickup truck, asked her if she would like a ride home and, when Blasey rejected the offer, became angry and began making comments that Blasey says were objectifying her.

“That’s probably one of the more extreme situations,” Blasey said. “In Hamtramck it’s usually sometimes as subtle as a predatory look from somebody, or just staring which is harder to enforce or to address. And then of course, you know, people driving by and cars honking and hollering.”

Scott Aaronson is the owner of the Hamtramck Hostel, an international hostel that hosts travelers from all over the world. Recently, the Hamtramck Hostel hosted a group of around 20 women from Australia travelling as part of their college degree program. When the group returned to the hostel one night, Aaronson says that the women reported being harassed throughout the town.

“They would say that when they would go out, there would be people that would you know, honk at them, would make inappropriate comments,” Aaronson said. “Some people would follow them, would ask them to get in [their car], all sorts of crazy stuff.

“Now, I’m a six-foot-three, 250-pound man. So I never even really knew this was an issue until I really started hearing a lot of these girls stories.”

The issue of gender-based harassment, or violence perpetrated by men against women, is a complicated issue that demands more than solely legal, social or spiritual involvement. This stance is echoed by Hollaback!, a multi-city based group with the mission “to build safe, inclusive public spaces by transforming the culture that perpetuates discrimination and violence.”

Rather than a legal approach, like that proposed by Councilmember Perrotta, Hollaback! advocates for a holistic approach to addressing the problem.

“We recommend policy solutions that expand bystander intervention education, improve research and reporting mechanisms, train police and transit officers, engage local businesses and bring together diverse community members to facilitate ‘community safety audits,’” said Emily May, a spokesperson for the broader Hollaback! network of chapters, which includes a group based in Detroit.

There is still a number of essential solutions that people can advocate from the city, according to  Hollaback!. These solutions can be implemented in order to establish a holistic strategy aimed at preventing street harassment. However, the advocacy group doesn’t think that a legal approach would have the intended consequences.

As an approach, Hollaback! maintains that legal ramifications for Street Harassment will disproportionately affect people of color, despite the fact that gender-based harassment is not unique to one culture or ethnicity.

“Historically we’ve seen that criminal law and punishment are disproportionately applied to people of color, low-income individuals, and trans and gender-nonconforming people,” May said. “As advocates, we steer policymakers away from measures that would increase criminalization that predominantly affects these groups, and toward measures that engage communities in prevention.”

Many of the people involved in this conversation feel the same way about legal solutions to social problems. Rather, they feel that this is a problem that takes social and cultural solutions, which can still be tackled by institutions in the city like City Council.

“I think some sort of training in classes for younger kids as they get older – I mean, I think that’s as close as you get [to a solution], but obviously, it starts at the home,” said Aaronson. “I don’t think there’s a clear solution, but I think the closest solution would be exactly that, maybe empathy training where you put them in the shoes of the people that have to walk around.”

Lynn Blasey was reluctant to offer a solution, rather saying that this is just too great a problem.  “It’s going to take centuries,” Blasey said.

“It’s so engrained in human culture, you know?” Blasey said. “But if nobody tries, it never will change.”