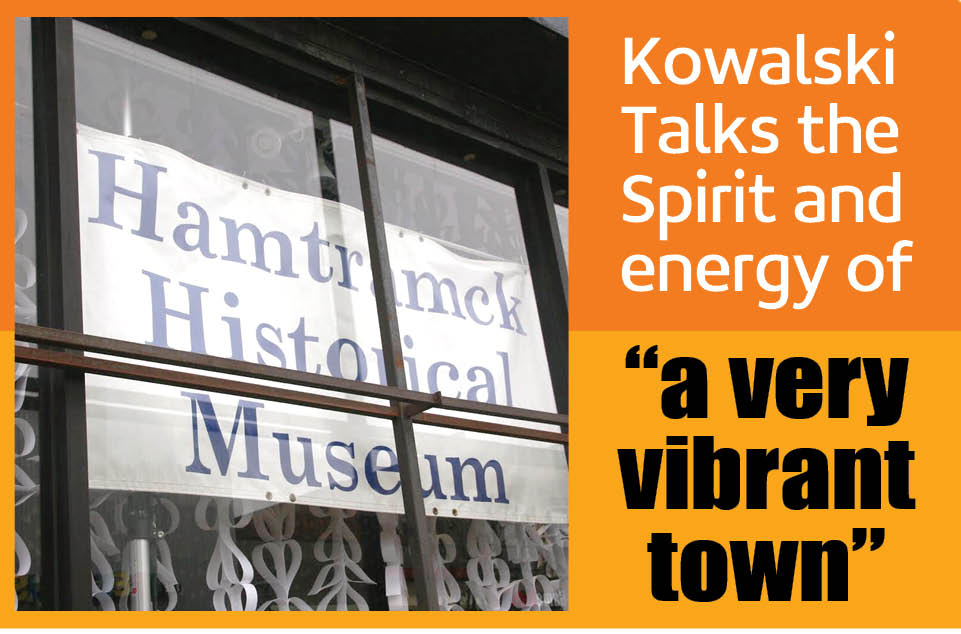 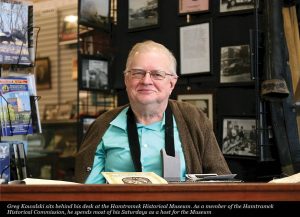 Most Saturdays, you can find Greg Kowalski sitting behind a wooden desk in the storefront Hamtramck Historical Museum. His bright hair and fair skin show he’s part of a community that used to define Hamtramck: Polish Immigrants.
Watching the changes over his 70 years of living in the city, Kowalski remains enthralled with the past, present and future of “a very, very vibrant town.”
Kowalski is the author of eight books on Hamtramck. Ranging from the wonderful to the weird, he writes through the eye of an intimate historian. The relationship he holds with his subjects is shown in the words he writes about legendary residents or World War II era politics, among other Hamtramck themes.
The town’s history, according to Kowalski, started when a group of German farmers came together to form a village in 1798. Hamtramck in the 1800s was massive, sprawling from the Detroit River to modern-day 8 mile. Woodward Avenue and Grosse Point also marked its old borders. As the decades passed, and Detroit grew into the bigger city, Hamtramck was swallowed up until it became the two square miles it is today.
In the early 1900s, the Dodge brothers started a factory to build parts for Henry Ford’s Auto Manufacturing Plants. “And they completely transformed Hamtramck,” Kowalski said.
The Dodge Main Factory workers boosted Hamtramck’s population from 3,500 people to nearly 50,000 in just ten years, ending in 1921. The workers were predominately Polish immigrants. Their quick rise to a majority of Hamtramck’s population has defined the city for more than a century.
The arriving Polish immigrants weren’t always treated fairly. Kowalski says that in the 1930s, the country’s attitude was scathing toward the newly arrived wave of Eastern European immigrants.
“There was a view that Northern Europeans were the kind of immigrants you really wanted,” Kowalski said. “So the Germans, the English, the Norwegians. Things like that. [The country] just didn’t want Eastern Europeans.”
What might’ve saved the Hamtramck residents from this general attitude was the sheer volume of Polish people coming to live in the city. With local government and business turning overwhelmingly Polish, the city became its own oasis against the kind of discrimination that Polish immigrants felt elsewhere.
One of Kowalski’s most recent books describes some of the legendary locals who grew up in the city. Some were secret agents who married Russian counterspies. Others, like Maurice Keyworth, changed thousands of lives.
“Keyworth was an incredible educator,” Kowalski said. “When he was hired in 1923 and came to Hamtramck Schools, he saw the flood of immigrant kids coming here and he said ‘this place is a mess.’”
The revolutionary superintendent developed, what Kowalski calls, a ground-breaking curriculum in order to guide students into drawing inspiration from their heritage. He wanted everyone to feel as though they were part of two powerful communities: their immigrant community and their American identity.
Kowalski said most of Hamtramck Schools’ Polish names were a product of Keyworth’s work as the superintendent.
“It worked brilliantly,” Kowalski said. “He was so good that he was elected State Superintendent of Schools for Michigan.”
Sadly, Keyworth was killed in a car crash two weeks later. According to sources from the time, educators from all over the state came to Keyworth’s funeral to mourn the legendary educator.
Hamtramck has always been a welcoming town. From the first wave of Polish immigrants to the Yemeni, Bangladeshi, and Bosnian arrivals – just to name a few. The city’s powerful way of life draws scholars year after year to study its dynamics.
“A lot of them want to know how Christians and Muslims live side-by-side and don’t kill each other,” Kowalski said.
At the Hamtramck Historical Museum, the exhibits show the history of a small town in America. But look just below the high ceilings of the small museum and you’ll see a carefully painted mural with people you might recognize.
The mural was meant to celebrate the presence of each community that calls Hamtramck home. A mural is dedicated to the Polish immigrants. The German. The Bosnian and Bangladeshi.
“The idea was to bring different people and get them to come in and see that this is their historical museum, and this is their cultural center too,” Kowalski said.
In a clear-glass case, students from Hamtramck Schools built small figurines for the future. Kowalski says that this is the future of the city. The children who live, grow and learn will come to define Hamtramck, according to Kowalski. Just like Polish immigrants did over a hundred years ago.
“There’s a lot of life here,” Kowalski said. “A lot of things going on here. It’s a very vibrant town. It hasn’t lost that spirit and it hasn’t lost that energy. So that’s what keeps us going.”