Demonstrators Take the Streets of Detroit in Protest of George Floyd Death in Police Custody, Turn Violent in the Night 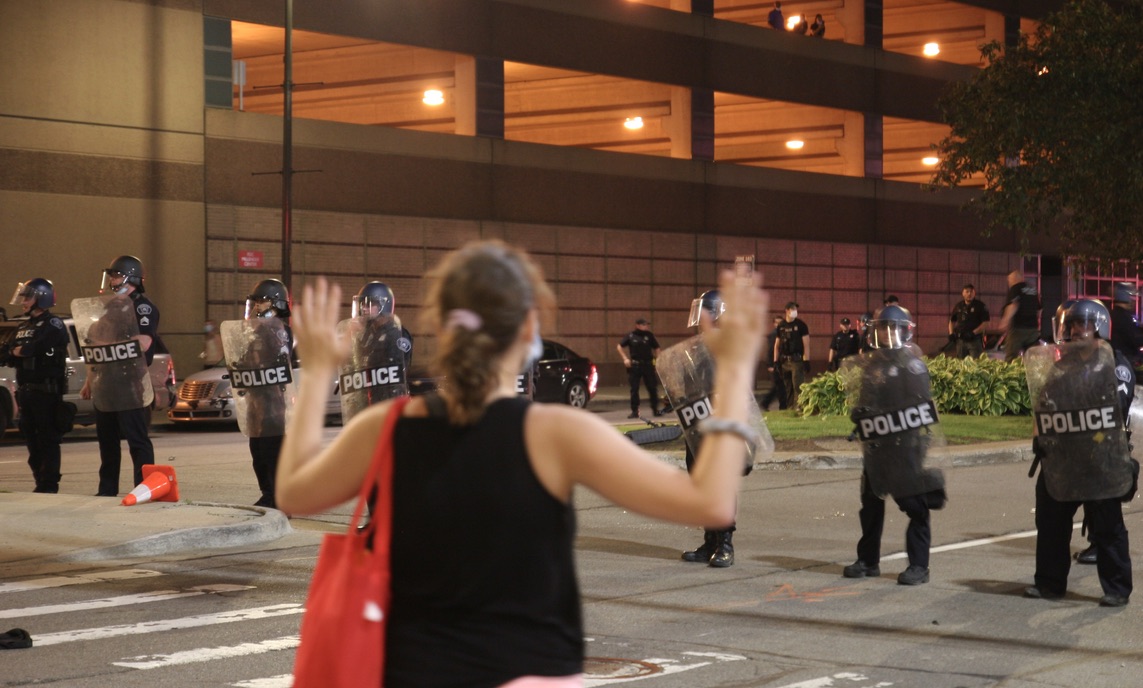 Detroit, Mich. – The death of George Floyd while in Police custody has had a resounding effect in America. As of now, Atlanta, Washington D.C., and Houston, among other major American Cities have hosted massive demonstrations against the officer who kneeled on the neck of George Floyd.

In Detroit, a Facebook event calling for demonstrations against police brutality began circulating, and by around noon the organizers posted that people should prepare for attendance in the thousands. The event gathered so much attention that news organizations began covering the event before it even began.

For the vast majority of time during the hours of the demonstration, protesters marched peacefully. On Woodward Avenue and Michigan Avenue, they chanted ‘Say his name! / George Floyd!’ and ‘Hands up! / Don’t shoot!’.

But at one point, the protest took a turn for the worse when police cruisers drove inside the crowd. Demonstrators began throwing objects at the police vehicles and punched the windows of the cruisers. Windows on police cruisers have been photographed dangling from the car doors. 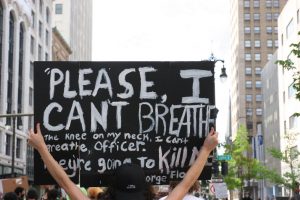 A Demonstrator carries a sign with the last words said by George Floyd while in Police Custody.

Two police cruisers found themselves in the middle of the crowd. Demonstrators reacted violently until the cruisers left the crowd and set up a perimeter around the protesters. The march continued as planned.

One of the organizers of the original protest, Metro-Detroit Political Action Network, said in a Facebook post that they did not plan or condone the violence in the original protest. “We received word some folks split off from our event and ran into issues with DPD,” said the M-DPAN Facebook page. “We aren’t sure of the details at this time, as this was not a component of our demonstration.”

At some point after the demonstration ended, people went back to downtown en-masse. The epicenter of the continued protest was on Randolph street, near Jefferson Avenue.

By this point, protesters have begun throwing objects directly at Police Officers. Members of DPD also deployed Riot Squads in order to keep control of that portion of Downtown Detroit. Meanwhile, a crowd of more than 300 people were going up against the riot police.

At the beginning of the standoff, police were using a tactic that involved charging at the protesters with riot shields and batons. This allowed the police to guide the protesters away from certain areas and keep the crowd in a centralized location.

These tactics were continued until around midnight, when, what has been identified as a gray Dodge Durango, pulled onto a side street and started shooting in the crowd. As the shots rang off, people who stood along the side street rushed back to the intersection, leaving behind a 19-year-old man from Eastpointe.

The man, who began to bleed outfrom the bullet wounds, lied on the sidewalk where a group of protesters came together to try and revive him. Soon after, police came and escorted an ambulance through the crowd in order to transport the man to a hospital. He was pronounced dead soon after he arrived at the hospital. 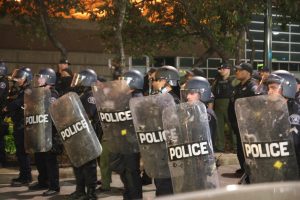 Police Officers in Riot Gear face off with protesters on Randolph Street in Downtown Detroit.

At this point in the night, around 12:30, the police began deploying teargas and flash grenades in order to disperse the crowd quicker. Other protesters reported that demonstrators were being shot at with teargas cannisters. Police began gaining more ground as they drove the group of demonstrators further down Randolph Street.

The Purpose of the Protests

Protests around the country have been surfaced after a group of demonstrators turned to rioting and looting in Minneapolis, Minnesota. The third precinct of the Minneapolis Police Department had burned down, along with other places in the neighborhood.

Detroit PoliceChief James Craig was very supportive of the peaceful portion of the protest. “Probable cause clearly exists that that officer (in Minneapolis) committed murder,” Chief Craig said during an interview with MSNBC. “Arrest him. Arrest him now.”

After the protest turned violent in Detroit, Chief Craig said that he abhorred the violence in the City of Detroit, urging people to step down.

Another protest has been planned for today at 4p.m. near the Police Precinct in Downtown Detroit. The Yemeni American News will be continuing its coverage as new developments are learned.