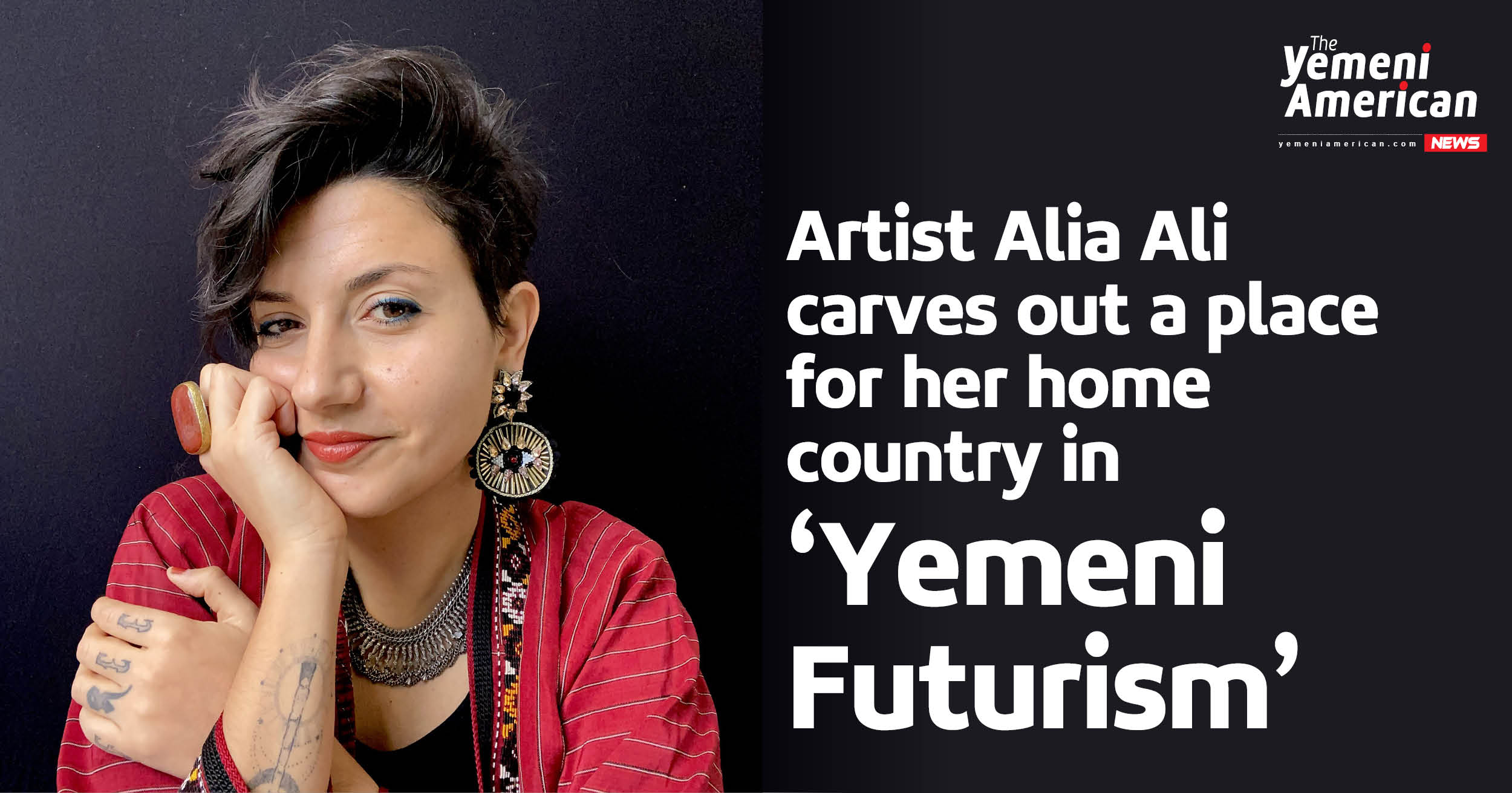 Dearborn, Mich. – Renowned artist Alia Ali remembers the windows to the moon of her native Yemen. The Qamariya, which illuminate the color through stained crescent shapes, left their mark on Ali. “They’re so magical, they’re so beautiful,” Ali said. In Yemen, as well as in other countries that were influenced by the architecture of Ancient Yemen, the Qamariya adorned houses, shining light into a colorful pattern within the home.

In the art of Yemeni Futurist Alia Ali, she’s working to draw on the rich history and culture that she lived as a part of until she was 13 years old. Some of the smallest details, like the Qamariya, influence her decisions in what she presents to some of the largest private collectors and most renowned museums in Europe. But rather than serving as a documenter and archivist of Yemeni culture, she’s working to distill the ideas of Yemen into their next aesthetic iteration, while never shying away from celebrating their roots.

“How do we disassemble some of the ideas and then put them back together and make something else out of it and use it as inspiration?” Ali said. “…You can say that I’m pointing back to the source and insisting, you know, showing and demonstrating that it’s Yemeni.”

“Navigating so much in five years.”

After graduating from University, Ali found herself working as the Director of Operations for the Marrakech Biennial – a reoccurring arts festival in Morocco that focuses on the cutting edge in contemporary art, literature and film. In it, she was tasked with executing others’ ideas. In this position, Ali soon realized that she was not being valued for her role as an independent creative herself, with the director of the biennial telling her: “your job is not to bring ideas. It is to execute [the artist’s].”

“And, you know, I just sort of sucked it up,” Ali said. “And I did it. And I just kept finding myself within certain structures that didn’t fit me. Whether it’s the US legal system, whether it’s language barriers.”

Ali recounts the time when a mentor asked if she was motivated by money or happiness. And indeed, Ali had all the tools she needed to possibly become rich in the art world. In the end, she decided that wasn’t what motivated her, and pursued a Master of Fine Arts degree.

Five years later, her work has been displayed in museums across the United States and Europe, with her famed photography portraits selling for well over $10,000.

“Today I had a meeting and they said ‘How did you navigate so much in five years?’ And I said ‘you know, what you don’t want to hear is that I now speak fluently four languages, and I function in six. The only reason that happens is because I had to learn your language in order for you to see me. I’ve used my life to orient around you to reach you.’”

Now, Alia Ali is an artist renowned for her work in Yemeni Futurism. In 2021, it was announced that Ali is one of only 20 other artists who’ve been named Artsy Vanguard artists.

Art for us first

Ali espouses the idea of the infrathin – “the moment in which something stops being one thing and starts becoming something else.” As someone who has been defined by binaries of identity such as Eastern and Western, Immigrant and Native, victim and perpetrator, she instead chooses to reject these binaries in favor of the space that’s in between.

For Alia, these binaries have had a real impact on how she navigated life. Growing up in Yemen to a Bosnian Muslim mother and a Yemeni Jewish Father, she first became aware of what’s viewed as the extremes of the human experience. Now that she’s looking at the Yemen conflict from the perspective of the diaspora, she can see how these extremes have victimized Yemenis.

Once, she brought her father to a gallery show in Paris. Initially, security wouldn’t even let her father in because of the way he was dressed. When a famed collector wanted to purchase her art, Alia said he interrupted her father’s question. “And I refused the sale,” Alia said.

“I think a lot of people in the diaspora who get quite embarrassed of their parents or embarrassed of how things are done, because they’re dictated as primitive or as not classy or whatever,” Ali said. “And I think that there’s a power to make the space and carve out the space and so ‘No, actually, the intention of the work is for us first. And if anybody else wants it, then they have to do the labor to orient around us…’ That’s what my work is about.”

Alia Ali earned a commission for a massive installation in the Arab American National Museum. Called al-Falaq, it draws on ancient myth in order to connect Yemen’s suffering with the Western institutions that are perpetuating the violence. The sculpture itself is 98 feet in length, taking up the air of the interior with 81 screens displaying stolen Yemeni artifacts.

Because of the conflict in Yemen, the world is at risk of losing one of its oldest, richest histories. Yemeni people in Alia’s life are already at risk of forgetting that history, like one arts journalist she developed a friendship with. With these two purposes in mind, al-Falaq, a multimedia sculpture in the atrium of the Arab American National Museum creates a monument to Yemen.

“Basically, I wanted to take back all that was ours, and leave this earth because we’ve been pushed out and I wanted it also to be a statement for the world or for people to see what is at stake and what they have rejected. And it is.”

Spending half of her upbringing in the United States, away from the conflict that developed, she often wonders about what this means for herself, asking the question: “what does it mean as a Yemeni to be from two places, one that actually survived off of the destruction of the other?” Ali said.

As an artist, she’s been working through this question in order to point back to the source, insist, show and demonstrate that certain beautiful things in the world are, in fact, uniquely Yemeni. But more than that, Ali is trying to establish a community around the future of Yemen.

“It’s become more of an important thing for me, rather than archiving, is to make the community,” Ali said. “Because in order to create a future, you have to have a community… This is also a calling for other Yemeni creatives and thinkers. To say ‘where are you.’”