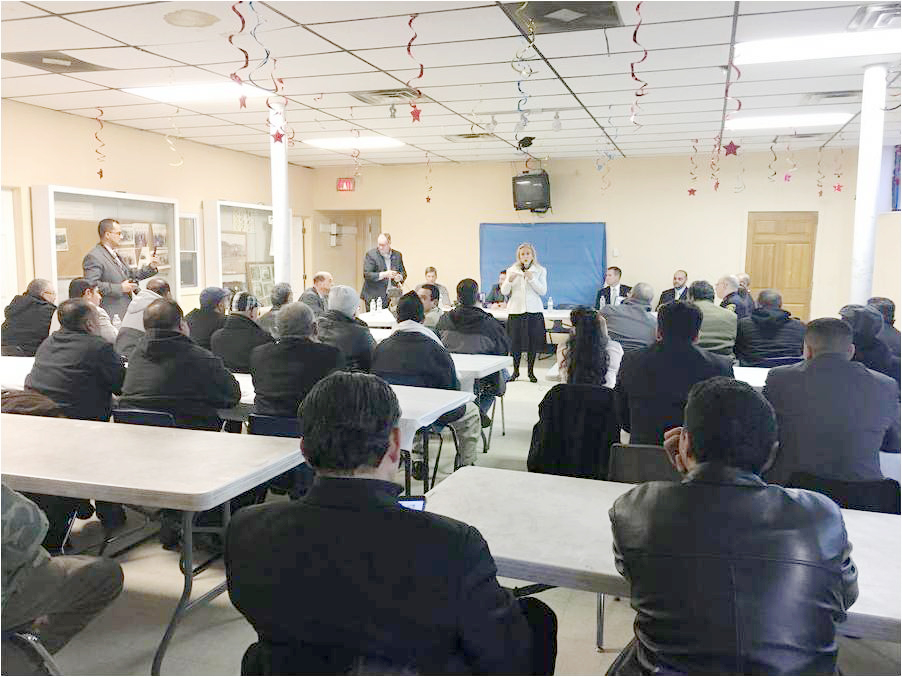 Metro Detroit’s 15,000 Yemeni Americans wait to hear what will happen next.

“After 12 years, they revoked the case. I cannot believe this.”

Muad Noman came to a recent community forum on immigration with one big question on his mind: how can he get his sister to the United States?

Noman, who lives in Hamtramck, left his native Yemen in 1999 as a youth to join his father who had been in the U.S. since 1971.

“Now everybody’s here except one of my sisters who’s married with her family back home in Yemen, and we’re trying our best to get her here,” Noman says. “But it looks like it gets harder and harder every year.”

In the weeks after President Trump issued his executive order limiting immigration from seven countries including Yemen, Noman and others in Detroit’s Yemeni-American community continue to question what the new president’s policies will mean for local families. Dozens of people filled an auditorium in Dearborn earlier this month to hear from local and federal officials and ask what they can expect in the coming months.

A woman asks about the legality of having her mother’s passport confiscated by border agents. Officials with U.S. Citizenship and Immigration Services tell her that passports can be taken as they are U.S. property, but the confiscation does not revoke her mother’s citizenship.

One man asks if his young child can sponsor his citizenship. The federal agents tell him that his son must be at least 21-years-old to do that.

Another man asked about the delay of his application. He is told to apply again.

These questions are familiar to Abdulhakem Alsadah, president of the National Association of Yemeni Americans, which is based in Dearborn. “What the executive order has done is made a bad situation worse,” he says.

The association provides a variety of social services for metro Detroit’s Yemeni community, and Alsadah says since the executive order was signed, he has been working overtime.

A Century in the City

Metro Detroit’s Yemeni community has been established for a century, says Sally Howell, director of the Center for Arab American Studies at the University of Michigan-Dearborn.

Yemeni Merchant Marines came to Detroit in the 1920s to join the growing auto, followed by various waves of immigrants who chased job prospects throughout the 20th century.

“In the 60s, 70s, maybe early 80s it was mostly a male population,” who would send part of their paychecks to families back home, Howell says.

A real shift happened in metro Detroit’s Yemeni community during the late 1980s, according to Howell, when families began to immigrate. They established themselves in Detroit and the south ends of Dearborn and Hamtramck.

“The Yemenis who were new to having families here, living in this space that had suddenly been abandoned and was dangerous, they started doing all sorts of creative things like working with the police to patrol the neighborhood,” Howell says.

Many credit the Yemeni community’s effort to build their new communities with helping to revitalize the neighborhoods, further establishing Yemenis within metro Detroit.

Howell, who authored the book “Old Islam in Detroit: Rediscovering the Muslim American Past,” says Yemeni Americans centered their lives around the mosques they established. One of those is Mu’ath Bin Jabil, which helped make Hamtramck the country’s first majority-Muslim city.

“This is the land of opportunity, because people come here to finish their education, to improve their economic life, or to live good life here.”

“This is the land of opportunity, because people come here to finish their education, to improve their economic life, or to live good life here,” he says.

Still, for someone like Noman, the U.S does not necessarily feel like a land of opportunity at the moment. His father in 2005 applied to sponsor his sister, and since then she has had several children. Then his father died while waiting for the paperwork to progress. Noman re-applied to sponsor her, but he says the federal government revoked the case.

“As Yemeni-Americans in the United States, we are being treated differently,” Noman says. ”We feel that we are second-class citizens, that we don’t get our civil rights as any other American living under the skies of the U.S.A.”

Noman is like nearly all Yemeni Americans who have direct relatives — parents, spouses, or siblings — currently living there, according to Alsadah. While it’s been difficult for all people affected by the executive order, Alsadah says it’s especially rough for those emigrating from Yemen.

Just 12 people from Yemen have arrived in Michigan with refugee status during the last few years compared with thousand from Iraq and Syria, according to The Refugee Processing Center, which is operated by the U.S. Department of State.

“It’s different because there is no American embassy in Yemen,” Alsadah says. “American citizens who want to bring their families, they have to get out of Yemen to go to other countries so they can apply.”

Yemeni immigrants who end up in Detroit have sometimes traveled to Malaysia, Djibouti, Algeria and a host of other countries with lax visa laws, Alsadah says. There, they wait months, sometimes years, for the U.S. to approve the immigration paperwork, DNA tests and blood samples they submit.

Alsadah says the vetting process was rigorous even before the executive order was signed and expensive.