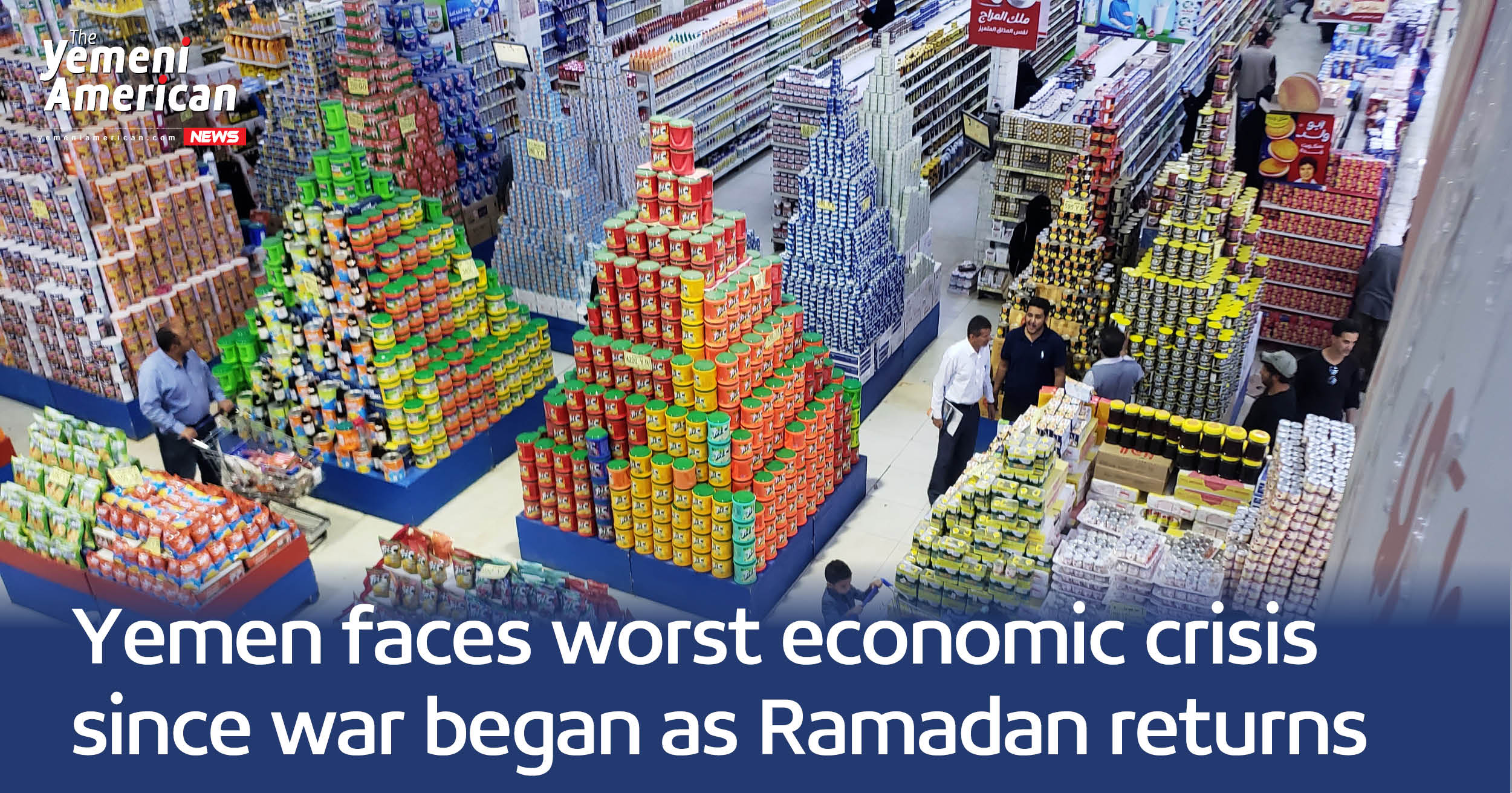 As the holy month of Ramadan approaches, the economic situation in Yemen has reached such a dire state as the war enters its eighth year that most Yemenis are struggling to buy their vital necessities.

“Because of the hysterical rise in prices this year, I wasn’t able to buy what we need for Ramadan,” Nawal, a teacher, tells the Yemeni American news. “I’m having a hard time buying basic goods like flour, rice, sugar, oil, that’s on top of the shortage of cooking gas. We are being deprived of the usual components of the Ramadan meal.”

Ramadan returns this year amid a disastrous economic downturn that is the worst since the war began with the cost of food rising sharply and the country facing multi-faceted crises.

Earlier this month, UN agencies and international aid groups said 161,000 people in war-torn Yemen are likely to experience famine over the second half of 2022, while millions more will face food insecurity.

“Between June and December 2022, the number of people in Yemen likely to experience high levels of acute food insecurity will increase by 1.6 million to 19 million. Out of these, 11.7 million people are estimated to be in Crisis, 7.1 million in Emergency and 161,000 in Catastrophe,”  a report by the Integrated Food Security Phase Classification (IPC) said.

The report said Yemeni families are selling assets they depend on and taking on large debt to survive.

“At the household level, primary underlying causes of acute food insecurity and malnutrition include increased food prices amidst reduced incomes and labor opportunities,

contributing to poor diet in terms of quantity and quality, as well as low coverage of sanitation facilities and poor hygiene practices, which have led to a high disease burden,” it added.

Yemeni markets used to witness increased economic activities ahead of Ramadan. However, during the years of the war, this seasonal spending has been decreasing gradually because of poverty and unemployment with many public sector employees losing their income and the local currency collapsing.

And while Yemenis’ income goes down, prices are moving in the opposite direction. The uptick in prices has been especially harsh this year. For example, a 50-kg bag of flour in the capital Sanaa, which is under the control of the Houthis, has risen to 21,000 rial from 14,000 rial last year.

This 50% to 100% hike in the cost of food and consumer goods, along with scarcity in gasoline and fuel, is being witnessed in regions across Yemen under different local authorities.

Alaa Fadel, who drives a commuter bus and is responsible for a family of 10 in Aden, noted that Ramadan comes this year with the weather heating up while power cuts persist.

“Because of the lack of income, and the financial obligations that we have, my family and I will welcome Ramadan like any other month. We will continue to look to only fulfil our basic daily needs,” Fadel told the Yemeni American News.

And this stagnation in economic activity is affecting both consumers and suppliers. With no money to spend in the hands of people, vendors are not selling enough goods to sustain their businesses.

“When goods are inexpensive, the demand goes up. For example, I would sell 100 boxes of oil weekly. Now with the prices skyrocketing, I’m selling only 40, but my profit per box is still the same,” said Faress Al-Jabrati, who owns a spice and grocery store in Sanaa.

Rasheed Al-Haddad, a journalist who covers the economic issues, said the crises that the country has been witnessing, coupled with the blockade that restricts the entry of fuel into the country has made it difficult for Yemenis to carry on.

“People’s buying power has receded with income rates going down and the local currency collapsing,” Al-Haddad said. “At the same time, the collective punishment continues with ending the pay of public sector employees for the past six years. People are struggling more than ever.”

War in Yemen… and Ukraine

The oil crisis, with the increased cost of transportation, is one of many internal and external factors that have caused this sharp rise in prices. While Yemen is hurting from its own war, the Russian-Ukrainian conflict is piling on the already impoverished country’s economic woes.

The World Food Program warned this month that more countries will “feel the burn” of the rise in food and oil prices because of the war in Eastern Europe.

And because this economic downturn is global, aid groups’ funding is going down.

“With our funding levelling off because donor nations’ treasuries are so stretched, we have had to slash rations to refugees and other vulnerable populations across East Africa and the Middle East,” WFP chief David Beasley said on March 11. “Halved rations mean hungry children eating the equivalent of just one bowl of cereal each day.”

Yemen is one of the places where the WFP is having to reduce aid rations.

Beyond the war in Ukraine, increased official and unofficial tariffs by the internationally recognized government and other warring parties is adding to the economic burdens.

“These are costs that ultimately the Yemeni citizen is paying for,” said one importer who preferred not to share his name.

Abdo Hussein Al-Saeidi said the current crisis is a product of using the economy as a bargaining chip in the war.

“To end this crisis, we need to distance the economy from the conflict. That means allowing fuel ships to the ports, lifting the blockade, paying public sector employees in all provinces and ensuring safe passages to transport food and consumer goods. Ending the war represents the only hope of ending this cycle,” Al-Saeidi said.