The Other Faces of War in Yemen: The Face Of Ammu Abdu – Vegetable Vendor 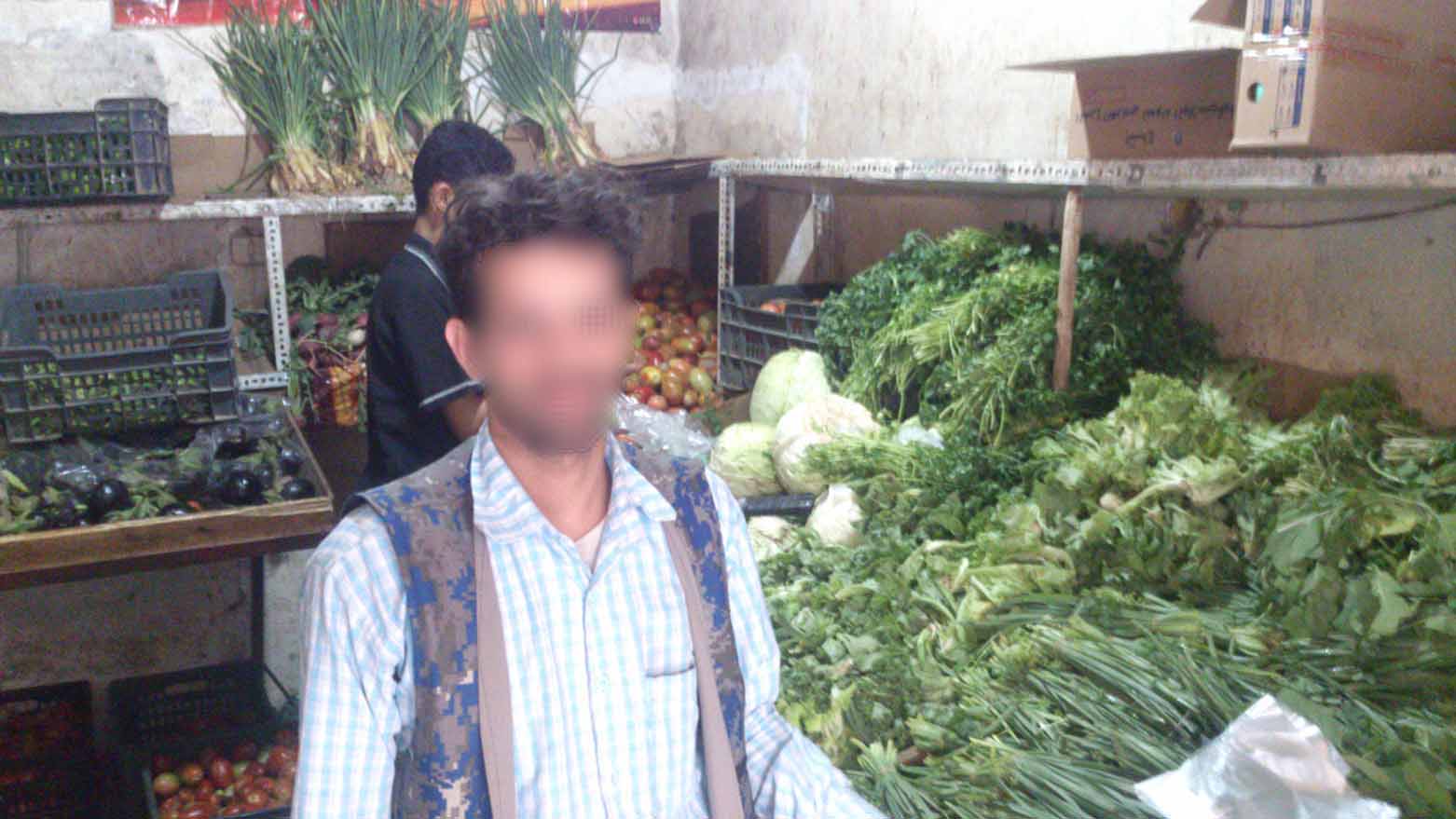 The subject of our profile has lived out the war in all its various temperatures and venues. Looking at the Mohammed the Vegetable Vendor has allowed the observer to look at his trials and tribulations in this war. The store owner has faced heavy losses. In the past, there were families that purchased vegetables in basket quantities, whereas now they buy in small YR 100 bags. Moreover, there were now families awaiting the end of the day, in the hope of taking home any leftover unsold surpluses. The stop payment of government employee salaries, after the Central Bank of Yemen was moved from Sana’a to Aden and the rise of vegetable produce prices three times was harder on the people of Sana’a than the war itself.

We now stand in front of the small vegetable store of Uncle Abdu for Vegetables in Beir Al-Shaif area in the Western Area of Sana’a City called the Beir Al-Shaef Area West of the Ministry of Justice. The store was always crowded although it was on a side street and people liked the proprietor of the store for his congeniality. It can be easily seen that the clientele of the Mohammed’s Vegetable Store comprises of low income inhabitants of the densely populated area of Sana’a City just to the East of the Old City of Sana’a. These buyers are loyal to Ammu Abdu, because they see him as one of them – a struggler in turbulent times, which the city has been perplexed with over the last two decades. This era was only topped off by a war, which has eaten at the savings and earnings of millions of Yemenis and had turned life into a struggle for survival, where such things as prosperity, comfort and well being are only allowed to be a figment of the imagination.

Ammu Abdu’s store is now run by Abdulkarim’s sons as seniority has rendered the father far less capable of carrying out his duties as proprietor and manager of a modest business that has provided Mohammed with once a thriving livelihood. Mohammed Abdulkarim at 27, the elder son wakes up early as all vegetable vendors must. He rushes with his faithful Subaru small truck to the General Ali Muhsin’s wholesale vegetable market on the northern periphery of the sprawling and rapidly spreading City of Sana’a. By sunrise, the Ammu Abdu’s Vegetable Market is ready for opening to cater to its loyal clientele. The store has given an adequate livelihood for Ammu Abdu and his kids and grandchildren for over 25 years. For Ammu Abdu selling vegetables was a wise occupation to choose as vegetables are an ongoing demanded commodity, which are required by the store’s customers give hell or high water. Although Ammu Abdu has irrecoverable losses of over YR 1 million (US $ 3,500) in debts owed by clients, the shop owner and his children, like all common folks in Yemen are optimistic that the tide will turn for the better for them and their country. It is an enduring patience that gives the Yemenis unfailing hope that there is always a light at the end of the tunnel – an optimism that reflects the ability to carry on notwithstanding the circumstances. Undoubtedly the memories of a once prosperous era in which the shop was able to generate the equivalence of US $ 450 per day, and now only generates less than one-fifth of that, surely show some of the source for the rapidly rising wrinkles on Mohammed’s face. Like all the common folks of the City of Sana’a Mohammed’s family has had to dig into the savings accumulated during the prosperous times and to sell some their assets once purchased by their surplus earnings. Nevertheless, like his father, Mohammed feels they have a duty to their customers to keep supplying them with the vegetables they need to fulfill their nutritional requirements. Thus they continue operating the store and helping their customers cope with these hard times for all the people of Yemen.

Mohammed understands the plight of most of their customers, who heretofore depended on fixed income from government salaries or other sources, but which for 9 months have ceased because the so-called legitimate government recognized by Yemen’s neighbors and the international community undertook a move of tragic consequences to millions of government employees and military and security personnel; the Central Bank of Yemen headquarters was moved from Sana’a to Aden (promising to continue to pay salaries as before but never doing so). Thus Mohammed tries to be understanding with the vegetable store’s clientele. He regards the stoppage of payment of government salaries as more devastating than the direct effects of the war.