How Coronavirus will affect Detroit’s Economy 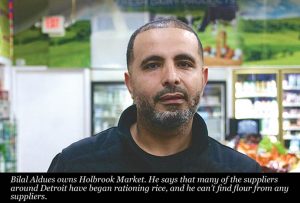 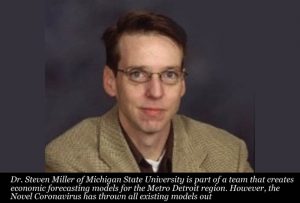 In the Meijer Supermarket on Eight Mile Rd, lines stretched halfway down the aisles as people anxiously stood with carts full of dry goods, nonperishable foods and bottled water. Many shelves, like rice and toilet paper, were empty after customers went through the entire stock of the store’s supply. It was after two days of the intense shopping that the store started running empty on some of these goods.

Meijer’s corporate chain of massive supermarket stores will easily be able to resupply these items in their next shipment. But for many of the smaller grocery stores, the immediate future is an uncertain one.
Bilal Aldues owns the Holbrook Market in Hamtramck. After the intense shopping days in the middle of last week, many of the items that people depend on have sold out. “If we can’t find the products easily and we’re not able to resupply, I don’t know how long we’ll be able to stay open,” Aldues said.
For the past few days, he’s been calling supplier after supplier, asking for the prices of bread, flour, bottled water and cleaning supplies. Some, he’s been told, are not available anywhere in the region and some are being heavily rationed among buyers.
Aldues has been told that sometime in the next few weeks, grocery stores may find an easier time as people become accustomed to the new restrictions put in place. However, other businesses may not have the same prospects for reprieve.
Behind the bar at Trixie’s, Ian Perrotta has worked making drinks at the bar he owned while he attending Law School at Wayne State University. He passed the Bar Exam and, in January was admitted to the Michigan State Bar. But now that the Coronavirus has closed down every bar and restaurant in Michigan, he may have to walk away from Trixie’s.
“For the immediate future, we plan to operate on a carry-out basis from 4 to 8 p.m.,” Perrotta said. “And we’re looking at the logistics of Home Delivery.”
Bars across Michigan were closed on Monday, Mar. 16 as Governor Gretchen Whitmer closed any business that attracts large crowds in closed-quarters. Concert tours, and other major entertainment events were also cancelled.
But the question remains on what all this means for an economic outlook in the United States. And for those questions, most economic forecasters would’ve never been able to guess the effect of Coronavirus on the financial health of families.
In Michigan State University’s Center for Local Government Finance and Policy, Economic forecasters for Detroit are scrambling to revise their models being used to predict the financial future of the city.
“We don’t really, as economic professionals, think we have a model that is designed around such kind of social catastrophes,” said Professor Steven Miller of MSU.
According to models developed in MSU’s Center for Local Government, the economy was already slowing down. Professor Miller explains that commodities like houses were at an inflated price and the cycle of the economy was heading to a slower year.
But the model-breaking event, Coronavirus outbreaks, have indicated to Professor Miller that we will go into a recession.
We did not have a vibrant economy,” Professor Miller said. “We had a stable economy. But all the indicators pointed to slowing in 2020. And with this on top of it, definitely we’re in a recession.”
As of this week, the Big Three Auto manufacturers have just announced that they will be suspending production in Southeast Michigan. For the foreseeable future, some of the largest employers in the region will be laying off thousands of workers in what might be the most uncertain time of this century.
According to reports on the factory closures, workers will be receiving combined unemployment benefits that should roughly be the same as regular pay. However, if the crisis continues, it’s uncertain how long auto manufacturers will be able to contribute to the pay of its idled employees.
President Donald Trump has been injecting stimulus funding into the US Stock Market, as well as lowering short-term interest rates to zero in hopes of instilling confidence in the stock market.
“The stock market is not the economy,” Professor Miller said. “The stock market is basically the wealth of those that have invested in the stock market. So it’s not like a dip in the stock market has an immediate change in how people are going to spend because from their wealth. But it does have an impact on how people perceive their financial future.”
That crisis of confidence around Southeast Michigan may result in other Detroit industries, like retail and finance, to take a dip. However, the limited spending power during the time of the virus will more likely change what industries are more marketable than others.
So for business owners like Bilal and Ian, the future is uncertain. But as Professor Miller explains: “if we continue to look at the long term, we have a savings goal, and we continue to aim for that savings goal and just stay on that long-term track, you’ll eventually reach those goals. It just might take longer.”