So many Yemeni-Americans are shaped by the diaspora, those pockets of heritage in the United States that forge the identities of the community.

This was not the path of Fattum Mutahr. For Fattum, her notions of faith and identity came directly from her immediate family. Fattum spent her formative years in northern Michigan, always positioned on the Great Lakes where her grandfather worked aboard ships, yet continuously distant from the Arab and Muslim community in the southeastern part of the state. During Eid, there were only three families that would celebrate where her family was living in Sault St. Marie.

Living in isolation as a Muslim-American presented challenges. Fattum recalled, “We had to have conversations about identity at a much younger age. Instead of thinking about do I fit in, am I cool, do these kids like me…. as a teenager, it was something you thought about when you are getting bullied in kindergarten or first grade.” Fattum was thrust into the role of defining her identity in elementary school when her teachers had her get up in front of the entire school at an assembly and talk about Islam to a population that had limited cultural awareness. This experience made Fattum proud. Being the only Muslim in school made it easy for people to ask her about her identity. She was eager to share.

Fattum’s family has deep roots in America. Her family came to the United States in the 1930s. Radai’is are like that. They are pioneers among Yemeni-Americans. Her grandfather plied the waters of the Great Lakes. Her father rose to be an auditor for the Treasury Department. In all ways, the Yemeni-American story is the foundational migrant story of all Americans.

Then there is Fattum, an industrial systems engineering graduate of Wayne State University, who works as a program manager for General Motors. There, she consolidates all of the reports and presents that data to the chief executive who makes the final decisions on car models. With the long history of her Yemeni-American predecessors who toiled on the assembly lines and laid the foundations for the community, Fattum is the return on all of their investment: a professional Yemenia in the top ranks of management in a Fortune 500 company who helps to create a vision for one of America’s most recognizable brands.

Fattum’s success story does not stop with her professional acumen. Her grounding came from her mother and father, who taught her a “pragmatic application of faith,” one rooted in good values, kindness, and love. Fattum applies these essential elements of her faith and tradition. She served as a tutor in the community and has carried out official roles with the American Association of Yemeni Students & Professionals. There she is the epitome of a role model that all members can aspire to replicate.

Fattum’s advocacy for the community came when she moved to Dearborn. From someone who was not born into the Yemeni-American diaspora, Fattum faced a level of culture shock when she moved to Dearborn at age fourteen. “I grew up my whole life knowing that Muslims live a certain way and do certain things. When I came to Dearborn, there were some Muslims that were drinking, and there were some that were smoking, and some that were dating – it was such a mix. [It was a combination of] American values and Muslim values and Yemeni values all kind of squished together. and it was interesting to me because [I asked myself] why is the Yemeni community suffering so much?” 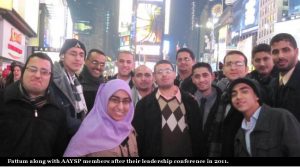 Fattum saw the problems facing the community and began to find ways that she could be a positive influence. She understood that her experiences and opportunities could now serve as a vessel to show her juniors the clear way forward. Her central focus is to promote education to Yemeni-American families in any way she can. She attributes many of the problems to a lack of communication between the generation that immigrated and the new generation that is struggling to fit in. It is a battle that all immigrant communities have faced in the long trajectory of American history. Fattum shared her thoughts on the current struggle that Muslims face in America today: “The Yemeni-American community also faces discrimination and a lot of hate coming from greater America. A lot of our President’s rhetoric is targeted against Yemeni-Americans with the travel ban….there is that feeling of being oppressed or being discriminated against.”

Despite the obstacles, Fattum sees hope in the future for the Yemeni-American community in Dearborn and Hamtramck. She said with confidence, “I continue to see the community expand. There are several generations of educated folk who can come back and contribute. It is a powerful cycle of growth. It is these principles, infused from the hills of Rada’a, defined in the isolation of northern Michigan, and blossomed in the urban setting of greater Detroit where Fattum exhibits a model of success, heritage, and virtue.