Butheina Raimy: “Opens Your Eyes, World to the Tragic Plight of Yemen’s Children” 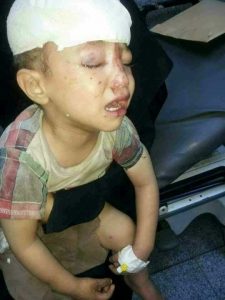 Sam, the other child survivor found underneath his parents corpses.

Since March 26, 2015 the number of children killed by indiscriminate bombing by the Saudi led Coalition in Yemen has surpassed 2,700 children according to the Legal Center for Rights and Development after 870 days of ongoing warfare, all of whom have nothing to do with the political situation or the parties to the conflict.  Yet, despite this large number of innocent victims, the plight of Yemen’s children has yet to attract international attention that would hopefully bring the international community to help put an end to this senseless killing.

On August 25, 2017, just two days after the Saudi led Coalition bombed a local hotel in Beit Al-Ithary, Arhab (40 km North of Sana’a) for transient agricultural workers killed 46 civilian martyrs, the Coalition again hit a civilian residential area in the West of the Capital City, Sana’a and the number of people, who lost their lives was 14, mostly women and children.

Butheina Raimy, the 4 years old girl pictured here was the lone survivor of a family of 4 other sisters (Ala, Ayat, Berdees and Raghad), her brother Ammar and her mother and father.  However, she had become an international icon overnight icon with a picture showing her trying to open her swollen eyes from injuries sustained in the bombing raid, and asking the world to open their eyes to the plight of Yemeni children caught in the middle of the seemingly endless war.

“Please see what is happening to us”, is what Butheina is trying to convey to the world as she wakes up from unconsciousness in the hospital and can’t understand why her mother and father or any of her brothers were no longer with her, when she had gone to sleep with all of them being there with her in their home.   She could not visualize the horror that she has just gone through only to wake up unable to grasp why none of her kinfolk are no longer with her anymore.  Her parents, sisters and brothers were left as charred bodies hardly recognizable as rescue workers pulled them out of the concrete rubble that miraculously had left Butheina alone from her family to survive the horrible missile attack that ended the lives of an entire family except for Butheina.  The sorry look of Butheina as she struggled to get her vision back moved the hearts of all who saw her pictures and many offers to adopt the pitiful very young orphan child came from all over the world.  All satellite television channels aired the picture the sorry and shocked look on her face, which was still covered with the scratches and bruises inflicted on her as a result of the 2 AM bombing raid, when everyone in the house was sound asleep.  Pictures below show the horror of the attack and the rescue efforts to get the victims out of the leveled residence.  She was also the star of social media as Facebook and Twitter were humming with posts about Butheina and her tragic calamity.

The tragedy of the same bombing raid was also made more horrific by the fact there was another child name Sam, who was also found underneath his parents dead corpses in the same air raid.  On the other hand there was a newlywed couple who had just returned from their wedding ceremony just before the merciless bombers unleashed their dead ordnance.  But Butheina was the star of the show.

The question still remains:  Will the international community continue to ignore the tragic plight of Yemen’s children as they suffer from relentless indiscriminate air raids, a spreading cholera epidemic  that has hit over half a million Yemenis and taken the lives of over 2,000 afflicted cases? Moreover, shall the world continue to remain silent while the Yemeni people are subject to a tight land, sea and air blockade, thus threatening more than half the population of Yemen with starvation, not to mention the refusal to pay Government employees salaries, all of which has rendered Yemen’s economy to a near standstill?