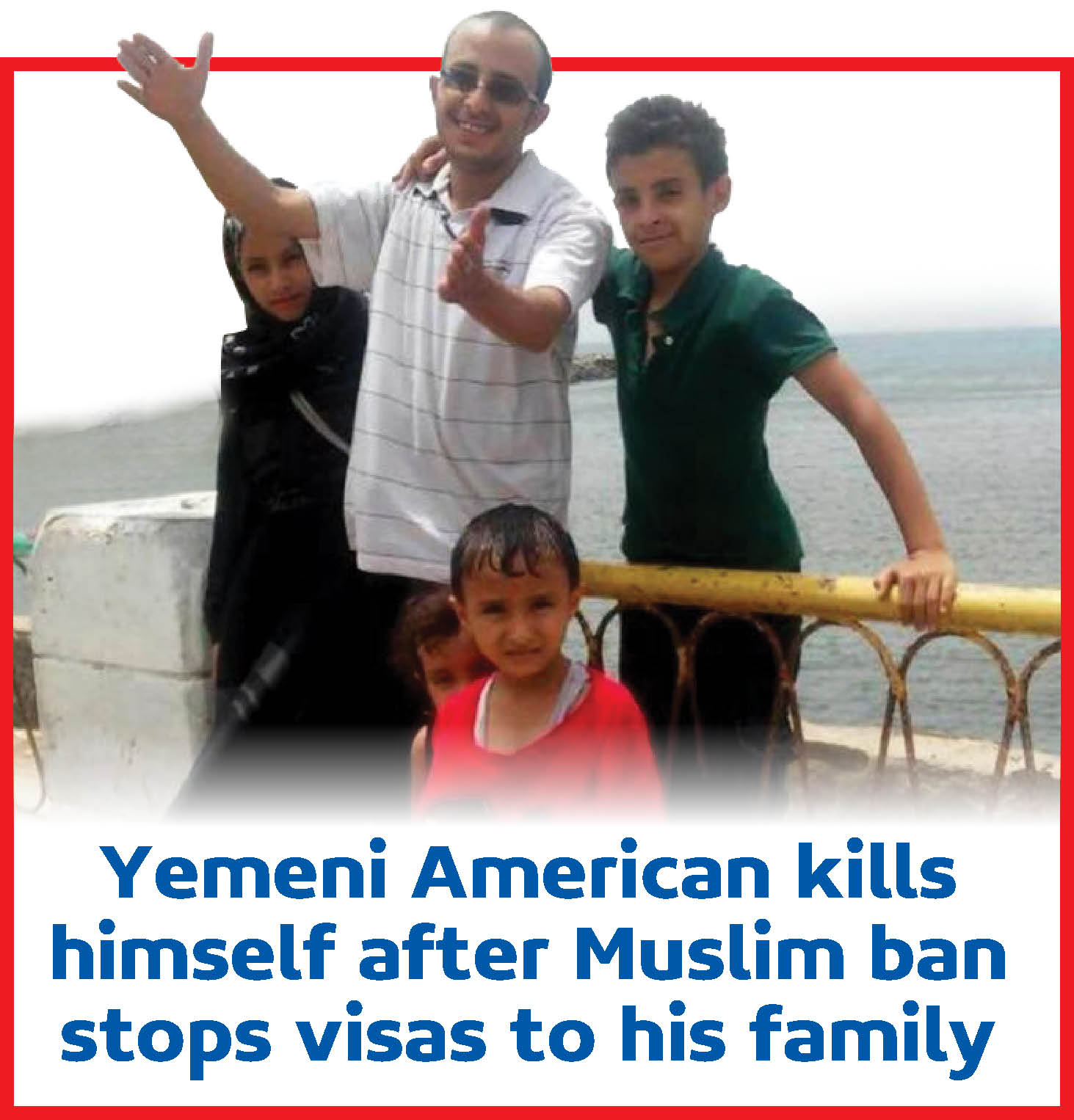 The Muslim ban is not a legal argument or a talking point; it has been a real policy that impacts the lives of American citizens and their loved ones in the most tragic way.
On July 18, Mahmood Salem took his own life in Crowley, Louisiana, leaving behind a wife and five children who had been abandoned by the Statue of Liberty’s promise of freedom and opportunity.
Salem’s family had been stranded in Djibouti waiting for visas to join their father who is a US citizen. Three of the children are American as well, but the wife and two oldest ones are not.
The journey to Djibouti is not an uncommon one for Yemeni applicants, especially after the war broke out.
But since the Supreme Court allowed Trump’s Muslim ban to go into effect, those who had made the trip to the Horn of Africa became stuck in limbo – Yemen’s war behind them and America’s doors sealed with a big lock of bigotry in their faces.
Salem had to take care of himself in the US while covering the expenses of his family in Djibouti, amid rising rental prices.
The economic pressure was growing, and being separated from one’s family is traumatizing.
Salem phoned his family before turning the gun on himself in his apartment at the back of a grocery store where he worked. He was 31.
The family had been granted preliminary visa approval before the ban went into effect.
Yemen, which is enduring a brutal war involving US-made bombs and fighter jets, is one of seven countries whose citizens are banned from the US under Trump’s Supreme Court-approved executive order.
While the State Department says that waivers can be granted to visa applicants caused undue harm by the ban, the policy has been nothing but an empty promise.
The waivers are too few and far between. Furthermore, immigration experts say that there is no defined process or standard for granting the exception.
Mimun Salem blamed the immigration ordeal for his younger brother’s suicide.
“I’ll say it’s the first and main reason. I could give it 90 percent,” he told NBC. “He cannot bring them here and at the same time, he cannot take them back to Yemen” because of the war ravaging that country.
Indeed, immigration-related anxiety can be crippling, experts say.
“Stress and depression in the immigrant community have always been there, but it is heightened now. I see more children being very distressed about the possibility that a parent will be deported,” Johns Hopkins psychiatrist Rheanna Platt told The Pew Center’s Stateline.
Trump’s critics say Salem’s tragedy exemplifies the suffering of immigrants under the US president.
“The Supreme Court of the United States has condoned this cruelty. The Muslim Ban is racist and cruel. Mahmood Salem’s suicide is a reminder,” activist Mona Eltahawy wrote on Twitter.
Yemeni American activist Debbie Almontaser called the Muslim ban a “silent killer in directly impacted communities.”
Democratic Congresswoman Yvette D Clarke, of New York, blamed Trump’s cruel policies for the death of Salem.
“On Friday, Mahmood Salem, a Yemeni in Crowley, Louisiana took his life thinking he’d never see his family. Another casualty of 45’s inhumane policies. #FamiliesBelongTogether,” she tweeted.
Community organizer Faiza Ali said the incident shows the real life and death consequences of Trump’s “bigoted policies.”
Advocacy group MoveOn wrote: “Condolences to Mahmood Salem’s family who took his life after failing to reunite his family due to Trump’s immoral Muslim Ban which causes harm to Muslim and immigrant communities across the country–from our borders to our homes. #NoMuslimBanEver.”
Salem’s wife and children were issued visas five days after his death, according to NBC, highlighting the government’s ability to resolve immigration issues quickly if it wants to.