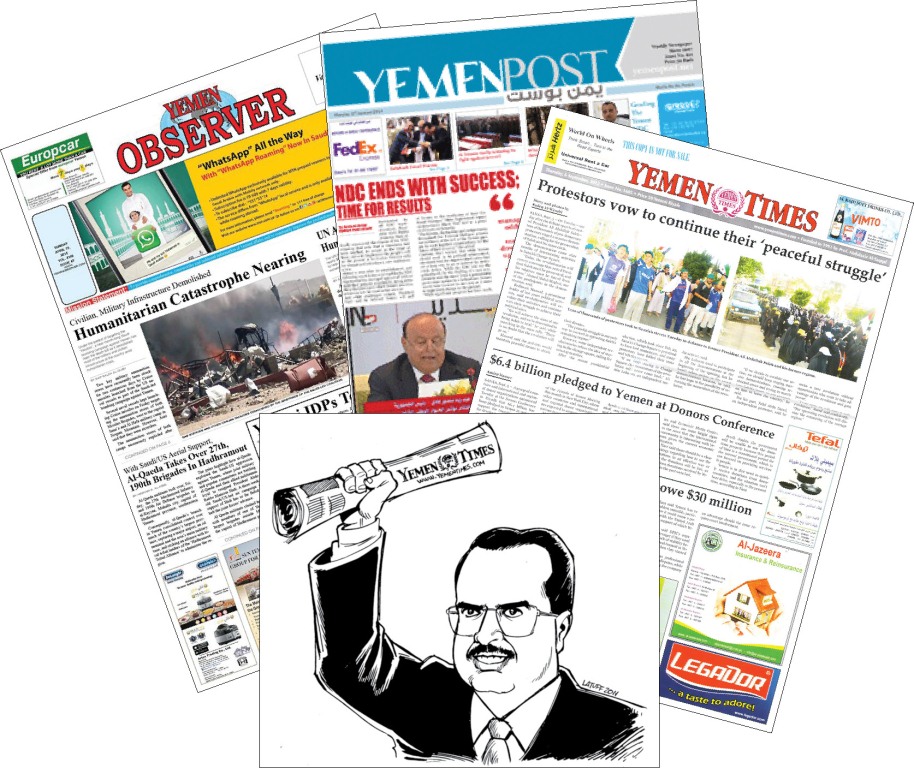 The first national English-language Yemeni newspapers were published in 1960s in Aden. These were Aden Chronicle by Mohammed Ali Luqmān and The Recorder by Muhmmad Bā-Sharāhīl. The publication of these and their sister Arabic-language newspapers Fatāt ul-Jazīrah and Al-Ayyam ceased when the National Front for the Liberation of South Yemen (NLF) took power in the then People’s Republic of South Yemen,

(PRSY) (later known as the People’s Democratic Republic of Yemen, PDRY) in 1967. The publication of Al-’Ayyam (Arabic) was resumed after the unification of the two sectors of Yemen in 1990.

The Unification of Yemen in May 22, 1990 produced a robust journalistic period, in which all the media enjoyed the unprecedented democratic climate for all the media to publish and air any material with minimal censorship.

In 1991, Dr. Abdul-Aziz Al-Saqqaf produced the first English Newspaper for the Republic of Yemen, the Yemen Times and brought Dr.  Saqqaf to international prominence.  His aggressive stances on human rights and anti-corruption won him the National Press Club award for Freedom of the Press in 1995, perhaps the first Arab journalist to win the prize.

Yemen Times was founded in 1991 by Abdulaziz Al-Saqqaf, a leading economist and human rights activist, who was also its editor and publisher until he died in a traffic accident in 1999. In the paper’s mission statement, he wrote that: “We use the Yemen Times to make Yemen a good world citizen.” Source:  Wikepedia.  The YT was published twice weekly.

After Dr. Saqqaf’s death, the Yemen Times became a corporate newspaper owned by the heirs of Dr. Al-Saqqaf (Walid, Nadia, Haifa and Raidan Abdul-Aziz Al-Saqqaf after the newspaper was reorganized in 2004, and was run by Walid Al-Saqqaf until February 2004 as Chairman and Publisher followed by Nadia until 2015 when the political conflict in Yemen turned into full scale warfare.  YT also had its own radio station.  The Yemen Times was completely independent and self financed by advertising revenues.

On 11 February 2006, former chief editor Mohammed Al-Asadi was arrested on charges of offending Islam. He was released on bail on 22 February 2006. In a trial that began on 23 February 2006, prosecution lawyers called for al-Asadi to be sentenced to death, for the paper to be closed and for all of its assets to be confiscated. Al-Asadi denied all charges and his defence team argued that the thumbnail images were accompanied by articles that condemned the cartoons and reported reactions from across the Islamic world.

In 2007, Mr. Hakim Al-Masmari, a veteran Yemen Times journalist set up the Yemen Post another Yemen English Newspaper.  Mr.  Al-Masmari also provided press services to international press organs like CNN and Wall Street Journal.  The Yemen Post has stopped printing and producing in its website since May 2015, two months after the conflict in Yemen escalated into all out war.

The Yemen Post is a newspaper in Yemen published since 2007. It is also Yemen’s first hourly updated online news service with reporters spread throughout the country. The Yemen Post hard copy version is distributed mostly in Yemen and was first launched in a newspaper format on 2 November 2007. The newspaper is distributed to over 2000 government institutions, embassies, organizations, businesses throughout Yemen. Along with our foreign distribution to neighboring countries, the Yemen Post is also distributed to some communities within Europe and the United States. The format of the newspaper was changed to a full colored, state of the art tabloid format on 16 February 2009. Source:  Wikipedia

The National Yemen is a website and apparently is run by the Exiled Government or apparent dignitaries allied with the Hadi Government.  No information  could be obtained on management and ownership.  Its website mainly deals with news catering to the Hadi Government in exile http://nationalyemen.com/