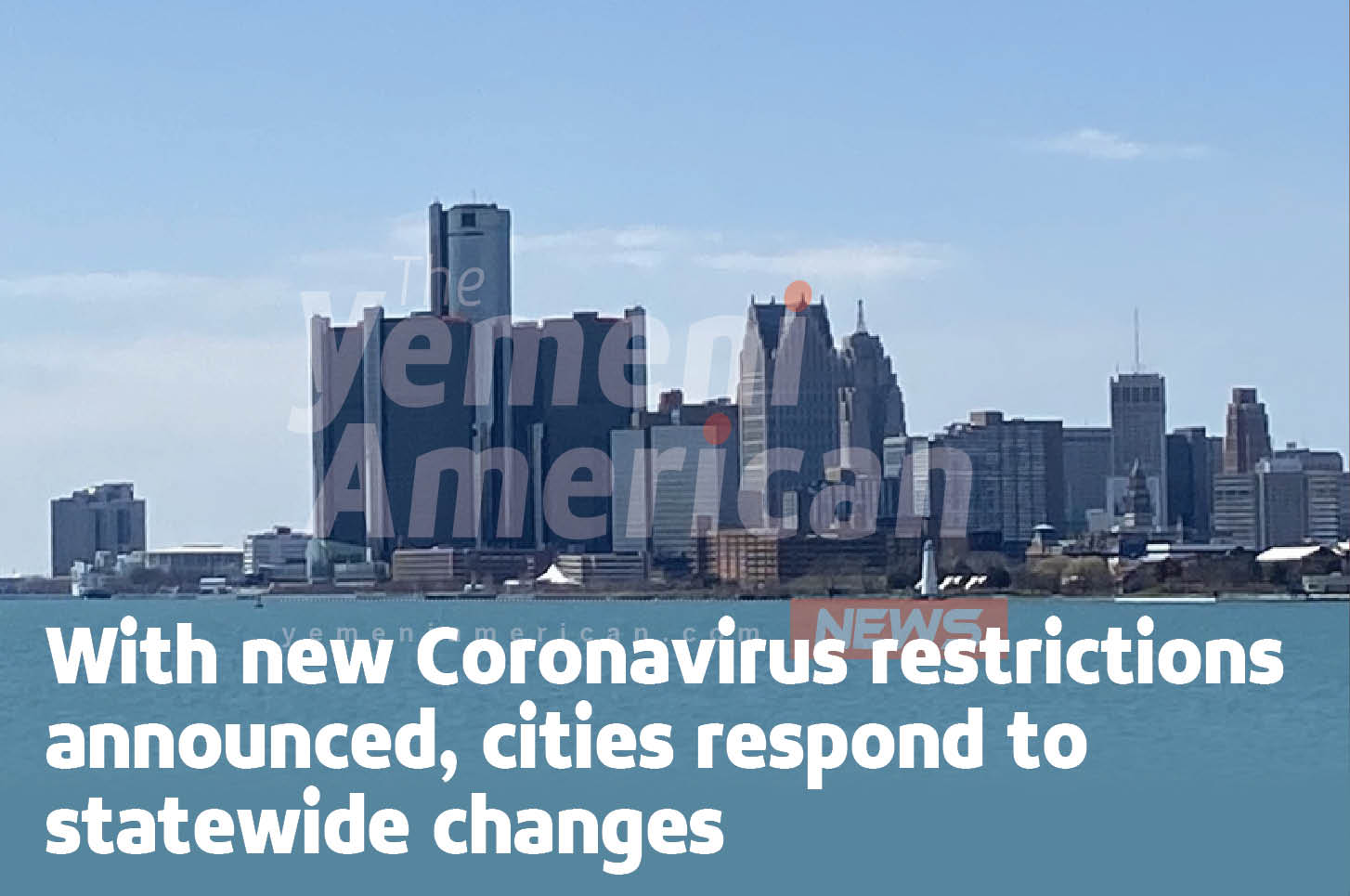 Lansing, Mich. – Yesterday, Governor Whitmer stood at the podium again to address the state. Under new Epidemic Powers allowed for the Executive Branch for the State of Michigan, Whitmer announced what appear to be more calculated restrictions in order to slow the spread of COVID-19.

The numbers show a harrowing growth of infection: a more than 2x increase in case numbers from the previous peak in April, and a 5x increase in COVID-19 patients in hospitals over the past five weeks among other public health metrics.

The new restrictions, which will go into effect starting Wednesday, Nov. 18, are limiting specific gatherings for the following three weeks. The order specifically will close many indoor public and business settings, while allowing some specific indoor activities to continue.

The order closes: Indoor dining service at bars and restaurants, indoor entertainment centers like bowling alleys and ice rinks, and group exercise classes. It also asks that all work that is able to be completed at home is carried out that way.

The order excludes industries that cannot be done at home, like manufacturing, construction, healthcare and few office work settings.

Gatherings are still permitted outside in places like parks, playgrounds and outdoor dining settings, but a mask is heavily encouraged. Some personal indoor activities are allowed, like retail shopping at reduced capacity, buying takeout from restaurants and bars and some personal care services like salon services. Gyms will also remain open for this period.

Today, City leaders were struggling to explain the new restrictions to their city’s residents. In a press conference, Mayor Mike Duggan showed a graphic that was meant to explain his frustration. In the three counties that make up metro Detroit – Wayne, Oakland and Macomb Counties – the City of Detroit remained lower than any of the county averages. 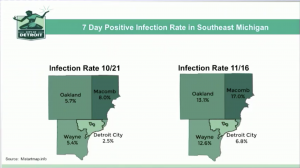 “‘Why does the Governor’s rule have to apply to us?’ The reality is that she has to treat us as a region. City of Detroit businesses are being shut down because of irresponsible behavior in the surrounding communities. Had she treated Detroit as its own region, and Detroit was the only place in Michigan where restaurants, casinos and entertainment were open, all of the folks in the surrounding areas with these ridiculous infection rates would have just one place to go.”

Mayor of Hamtramck, Karen Majewski has a different challenge. In Hamtramck, cases have climbed dramatically above 1,000 cumulative cases. In a city comprised of just above 20,000 people, this is troubling for city officials.

A little over 100 new cases have been confirmed over this past week.

“It should be no surprise to any of us why Whitmer has instituted new orders starting Wednesday morning,” Mayor Majewski said on her weekly video to Hamtramck residents.

“This is serious, folks. We have been seeing the biggest surge of COVID since the very beginning. Since March, since April. And I believe these are the highest numbers that the city of Hamtramck has ever had.”

The Data Shows Another Lockdown is Needed

Henry Ford Hospital System recently needed to add more restrictions for hospital visitation as the numbers continue to rise past what has already become an all-time high. Although the restrictions are specific to each location, many hospitals only reserve unrestricted access to patients for specific visitors, like those providing religious services or transportation for those who went through surgery.

Over the past few weeks, COVID infection has risen exponentially. Most new infections have happened within the Midwest.

“We did push that curve down [due to the last lockdown],” said Governor Gretchen Whitmer, at last week’s press conference. “Studies show that we saved thousands of lives. Our economy came roaring back. We were in the top 10 economic recoveries in the country. All of that is in jeopardy because of these numbers.”

According to data provided by Wayne County, the majority of cases are being confirmed in patients who are below the age of 30, who contract the virus at a rate that’s double the next highest demographic.

Currently, a virus produced by Pfizer Pharmaceutical Company has completed most FDA-required studies and is shown to have a 90% effectiveness rate. Some side-effects have been reported, like headache and fatigue, but one volunteer for the study reports that the benefits still very much outweigh the cost.

As the case numbers continue to rise, and the vaccine distribution remains on an uncertain timeline, leaders all over the state want people to take this personally. Personal responsibility as collective action has been the focus of many of the press conferences leading up to yesterday’s announcement.

“We need people to do their part individually, so we could collectively get through this winter,” Gov. Whitmer said. “That’s the most important thing that we’re trying to convey today. The trajectory that we’re on is dire, and it is very serious.”