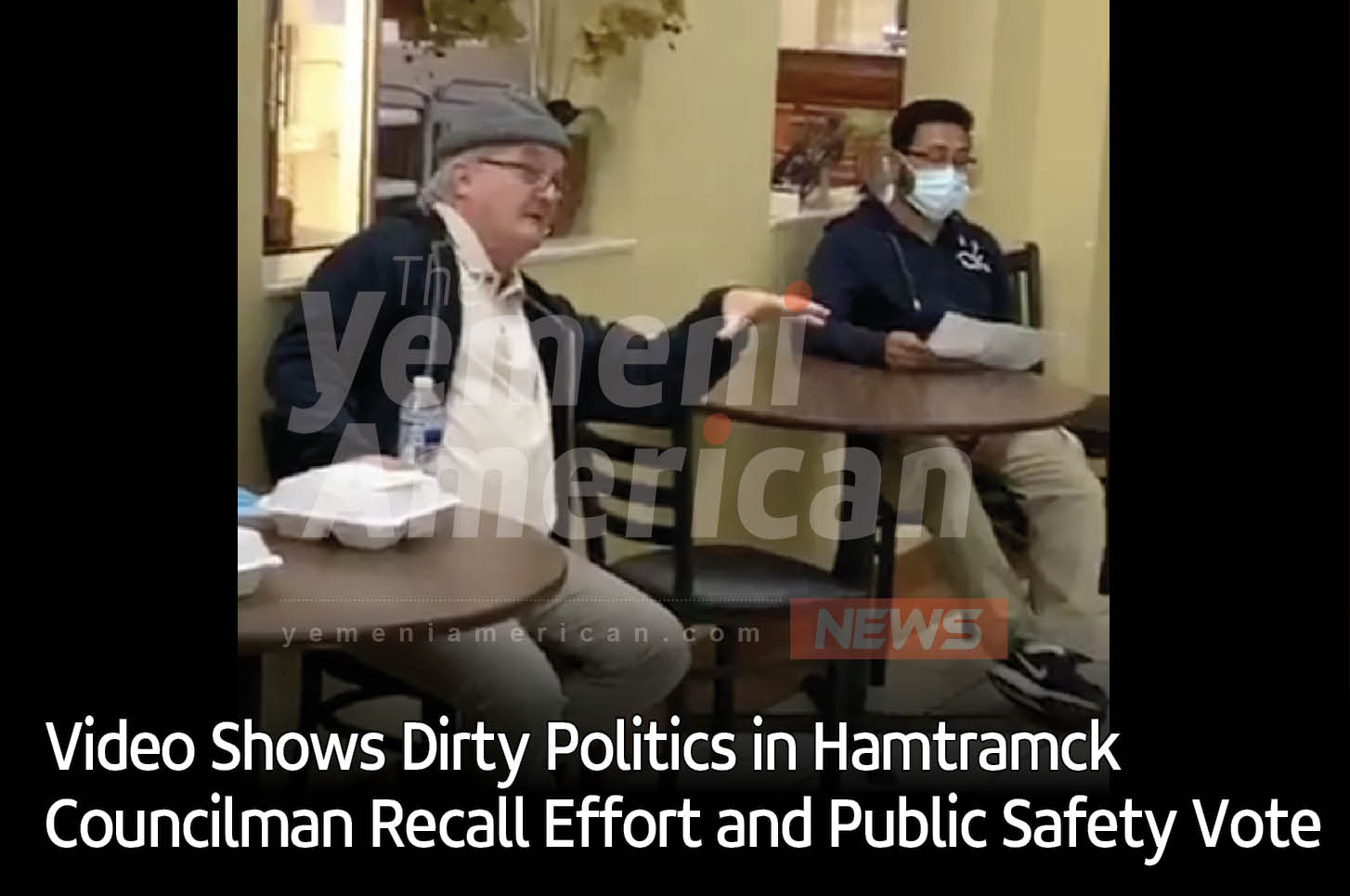 HAMTRAMCK, Mich. – A video on social media shows Councilman Hassan attending a talk at Aladdin Restaurant, where Scott Klein, a former city councilmember and now resident of Novi, explains that the only way to break support for the Hamtramck Fire Department is to remove Councilman Ian Perrotta.

Currently, Hamtramck voters are facing a vote on Nov. 3, deciding whether they want to remove the charter language that maintains the status quo of the police and fire department in the city. The vote has created a contentious discussion for politicians and residents in the city.

On Oct. 8, the Wayne County Elections Commission approved the language of a petition to recall Ian Perrotta from the Hamtramck City Council. The recall, which was introduced to the commission on Sept. 22 states that the purpose of the petition is because of Perrotta’s creating a hostile work environment. But the social media video, published on Sept. 18, shows otherwise.

Talking about the support for the fire department, Scott Klein suggests that the support is based on Ian Perrotta’s work at City Council.

“One of the ways we’re going to go after that structure is to recall Ian… Ian is going to pop like a pimple. And if you squeeze him, it’s going to go all over.”

Shortly after in the video, former Councilmember Anam Miah tells Councilman Hassan and Councilman Al-Somiri how they should try to get Councilman Perrotta off of City Council.

“I’m thinking Councilman should go ahead and make a motion at the next meeting that the majority of council, or whatever the motion should be, the council demands the resignation from Mr. Perrotta. At that meeting, that night. Because no one should be holding that position who has that temperament and volatility… One of you guys should make that motion.”

Scott Klein was originally interviewed in an earlier story by the Yemeni American News as a representative of mimaps, an organization he says is dedicated to bettering public safety. In the interview, he says that he’s working on behalf of a group of Hamtramck residents, but refuses to name them.

Mimaps is looking to influence voters on the decision that would dissolve the charter sections protecting the current state of the Hamtramck Police and Fire Departments. City officials have said that the vote was introduced because of the difficult budget situation that the city of Hamtramck has found itself in.

The original reason cited for the recall effort are the result of two censures against Councilman Perrotta. Both stem from what a press release calls anger management issues that resulted in Perrotta creating a hostile work environment. In one instance, Perrotta verbally abused a city hall worker for what he saw as an uninformed decision on a legal request to expand his bar to comply with COVID-19 Restrictions.

The video shows that the reason stated by Councilman Hassan, and published in the Arab American News, was a false pretext for influencing voters on the public safety vote. Councilman Hassan could not be reached in time for this story, despite multiple attempts to reach him.

Having been through State receivership twice – more than any other city in Michigan – Councilmembers and city officials are eager to avoid going into bankruptcy again. The solution that four City Councilmembers put forward to voters asks residents to consider restructuring the Police and Fire Departments.

It’s unclear what the savings would be, but the Fire Department has come out as staunchly against the proposal. According to Andrew Oleksiak, president of the Hamtramck Fire Department union, the decision would affect the safety of the community.

The need for Hamtramck to cut from its budget is immense. City officials say that they will work with whatever voters decide, but say that the city’s budget is strained at the moment. Property taxes are difficult to collect when the last census estimated that over 50% of the population lives within the threshold of poverty.

“People automatically assume, oh, you’re good, you’re flushed. GM is going to be pumping all this money back into the city. But what they don’t know is that’s two years out before that happens, you know? what does the city do for the next two years?” said Max Garbarino, Director of Community Safety and Services for the City of Hamtramck.

Fadel Al-Marsoumi was the first to introduce the charter amendment back in August. He says that he never wanted to get rid of the fire department.

“Because if receivership comes into Hamtramck, they will not only cut fire way more than we’re planning on doing, they will also cut police, and they’ll cut any funding for public safety. They will make sure that we have less money to work with than what we have right now.”