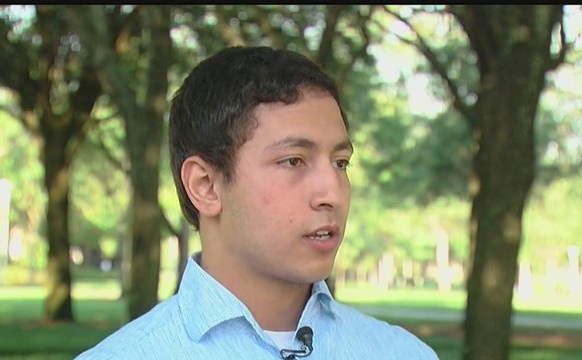 Ahmed Mohamed is a big believer in hard work.

He graduated from Blake High School and enrolled at the University of South Florida by age 15. He earned a 4.0 GPA while at USF and took only three years to earn bachelor’s degrees in both biomedical sciences and political science. He speaks fluent Arabic and fills his free time with Eagle Scout projects, swimming and jazz piano studies.

But the 18-year-old’s plan for after graduation will require so much hard work it’s never before been attempted at USF.

In August, Mohamed will be the first USF student to ever enroll in law school and medical school simultaneously.

“They’re still making the curriculum right now, I should get it next week,” Mohamed said with a laugh after graduating Friday morning with 970 other USF students. More than 6,500 will graduate in ceremonies throughout the weekend. “It’s really exciting. The best part about this is I’ll have a lot of options for a dream job.”

USF had to create a new degree program with partner Stetson University to accommodate Mohamed. He was accepted into programs at the USF Health Morsani College of Medicine and Stetson’s law school, and hopes to go on to a career in biomedical ethics. He should complete the six-year program by the time he’s 24, with both a doctor of medicine and doctor of law degree.

“Going into college I knew I had passions for justice and for health and I wanted to do both, but I didn’t know how to translate that into a career,” Mohamed said. “When I took a biomedical ethics course and saw the issues in the health care system, that’s when it clicked for me and I saw that was my calling.”

USF is not the first university to offer a dual degree in medicine and law, but among USF students Mohamed is a “pioneer,” said Charles Adams, dean of the Honors College.

Born in Cairo, Mohamed and his family spent time in South Carolina and Iowa before landing in Tampa when he began classes at Blake. He has always been active and studious, and rarely had to be told to do his homework. To shake off stress, he plays sports with his brothers, studies music and throws himself into Boy Scouts of America activities.

“For some reason, I just never got into video games,” Mohamed said.

His mother, a former pediatrician, and his father, a transplant surgeon, had to drive him to college classes until he was old enough to get a driver’s license, but for the most part his age rarely came up, Mohamed said. Adams said he didn’t even know Mohamed’s age until last year.

After watching their brother take an accelerated path to college, Mohamed’s younger brothers followed suit. Youssef Mohamed, 17, is in the second year of a seven-year medical program at USF and Adam Mohamed, 15, is in his first year in the USF Honors College. Saef Mohamed, 12, will enroll at Blake next year.

“In the beginning when he chose to accelerate his schooling, I was a bit nervous about him being around a lot of older people. But he’s always been mature,” said Mohamed’s mother, Hanan Ahmed. “I always felt he would do very big things because he has always cared about everyone around him. He dreams big, and he knows exactly what he wants to do.”

Mohamed is more excited than nervous about moving on to medical and law school, he said. Someday, he sees himself heading departments at the Centers for Disease Control and Prevention or the U.S. Food and Drug Administration.

That, he said, will give all of his hard work meaning.

“That’s where you look at the big picture of health care and kind of set the rules of the game, and that’s where I want to be,” he said.