The Canadian Border Protests: By the Numbers 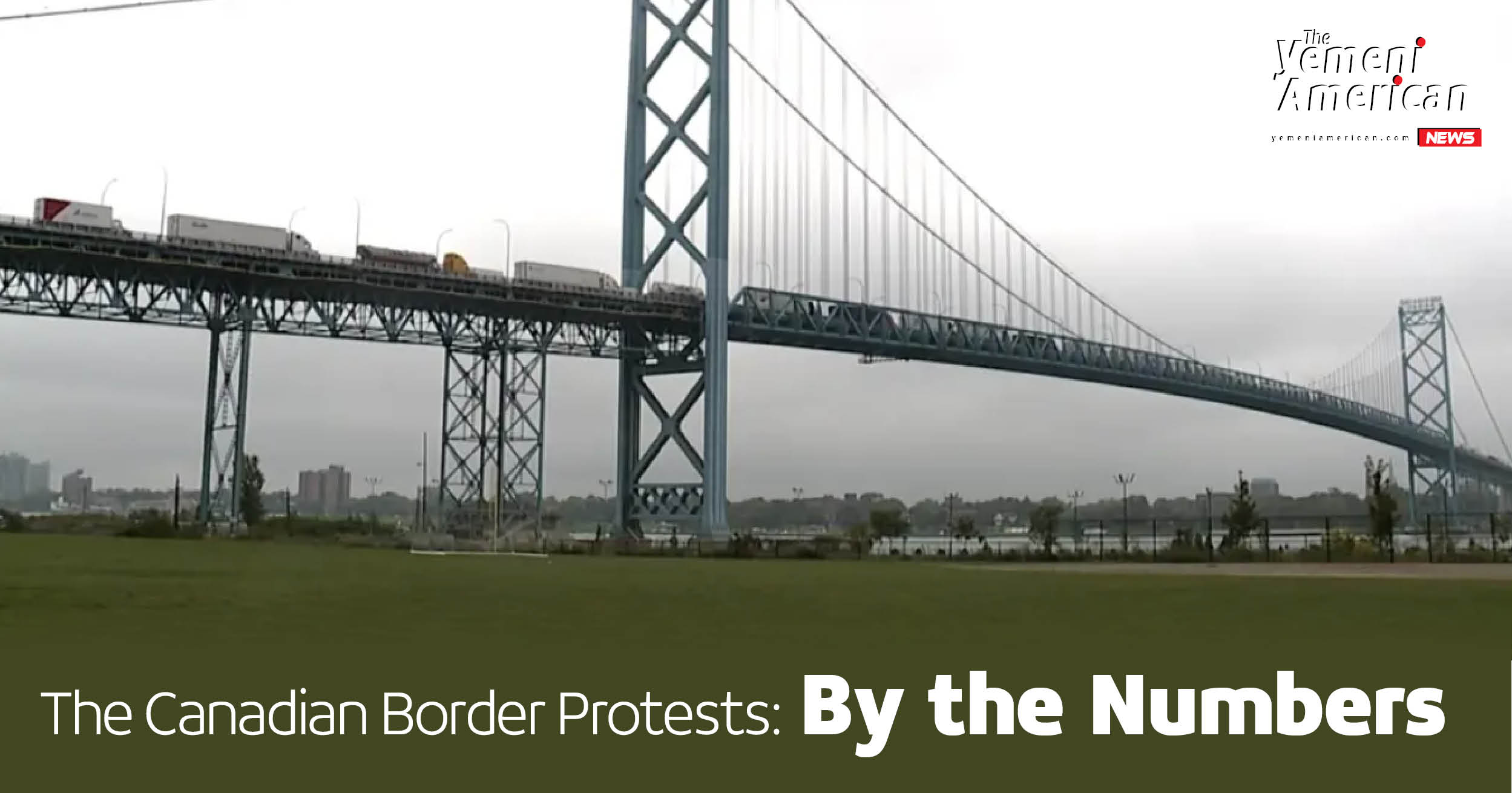 Detroit, Mich. / Windsor, Ontario – Over the past week, ports of entry between Canada and the United States were occupied by protesters demonstrating against vaccine mandates in Canada. The demonstrators, who were mostly long-haul truckers and their supporters, occupied the area leading to the ambassador bridge until this past Sunday.

However, the demonstrations proved to be the smallest portion of the larger ‘Freedom Convoy 2022’ protests that has flooded Ottawa, Ontario – Canada’s Capital. The estimated 10,000 protesters are demonstrating against a law that would require long-haul truckers crossing the border into Canada to either present proof of their vaccination, or quarantine for two weeks.

The demonstrations are specifically calling for an end to vaccine mandates. However, the demands of the protesters has been reported to change drastically from protesting a law for long-haul truckers, to demanding the resignation of Canadian Prime Minister Justin Trudeau. In a press conference with lead organizer Tamara Lich, she told the press that the protesters will not move until the demands were met.

“We will remain peaceful but planted on Parliament Hill until the mandates are decisively ended,” Lich said.

Although the crises at many border crossings have ended, including the reopening of the Ambassador Bridge in Detroit, PM Justin Trudeau has invoked a state of emergency in order to end the protests in Canada’s Capital.

Canadians taking part in the protest have been ardent about their goal to end COVID-19 mandates, among others. The number of demonstrators is guessed to be around 10,000 total participants by police sources, however, a number of key figures point to a different protest.

80 Percent of Long-Haul Truckers in Canada are Vaccinated

According to a statement from the Canadian Trucking Alliance, a trade organization composed of several regional trucking industry organizations, the vast majority of truckers are vaccinated and continue to work despite the protests.

“The vast majority of the Canadian trucking industry is vaccinated, with the overall industry vaccination rate among truck drivers closely mirroring that of the general public,” reads a press release from the Canadian Trucker Alliance. “Accordingly, most of our nation’s hard-working truck drivers are continuing to move cross-border and domestic freight to ensure our economy continues to function.”

Canadian Trucking Alliance President Stephen Laskowski has also released a statement condemning the nation-wide protests and calling on protesters to adapt to the circumstances.

“The Government of Canada and the United States have now made being vaccinated a requirement to cross the border,” Laskowski said. “This regulation is not changing so, as an industry, we must adapt and comply with this mandate. The only way to cross the border, in a commercial truck or any other vehicle, is to get vaccinated.”

Half the Donated Funds Came From the United States

Initially, donors to the Freedom Convoy sent their cash through GoFundMe, the largest crowdfunding platform in operation. Once reports of criminal activity stemming from the protesters reached the platform, GoFundMe pulled its support from the transactions, eventually refunding contributors to the freedom convoy campaign.

What became the alternative platform for the campaign became a massive vulnerability. GiveSendGo, a Christian crowdfunding platform, was hacked after more than $10 million was donated to the Canadian protests, exposing the names and zipcodes of donors. GiveSendGo has confirmed the information is authentic.

US and Canadian Industries Lost $500 million Every Day

According to estimates from Reuters, the Ambassador Bridge in Detroit and Windsor is the main avenue for $360 million in two-way trade between the two nations. Over the six days of blockades preventing trade at this, and other border crossings, it’s estimated that $500 million in trade was blocked.

The US Auto Industry alone is reported to have lost almost a $1 billion in revenue from the border protests, along with international auto brands reporting losses as well.

The financial impact of the protest hasn’t only been measured in lost trade revenue. In an interview published earlier this week, Canadian officials say that the cost of policing at the epicenter of the protests has risen to around $800,000 every day. The cost is associated with overtime and expanded personnel, and could rise if a request for more agents from the federal government is approved.