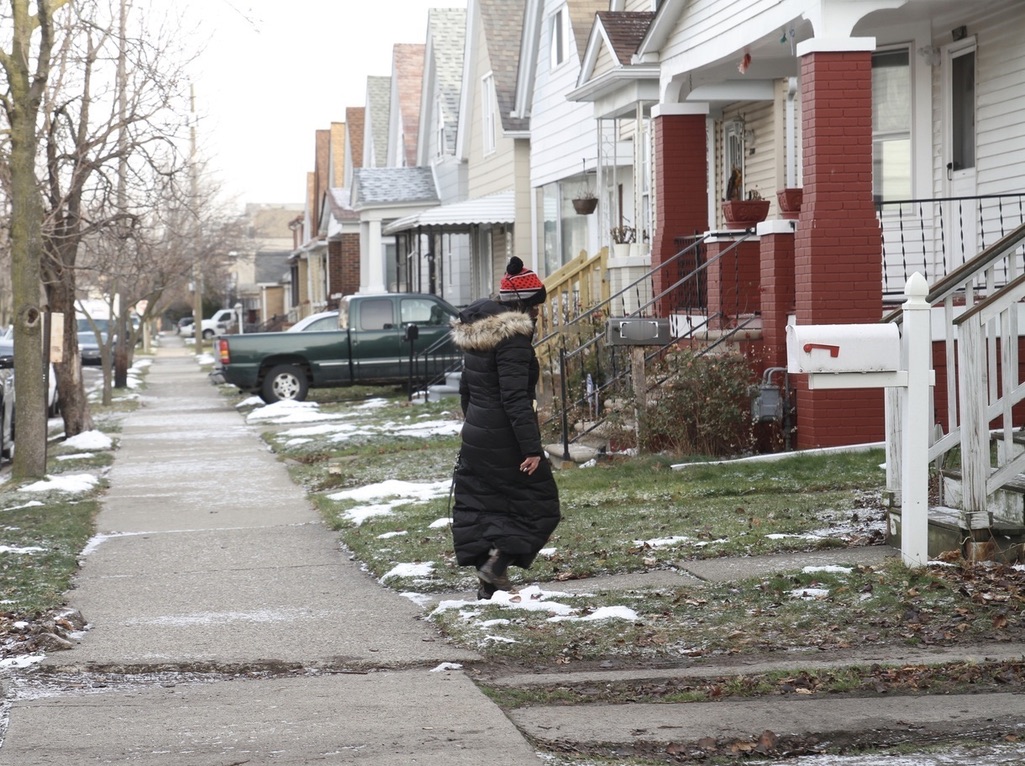 HAMTRAMCK, Mich. – For many people, the marijuana issue has been put to rest. An all-out ban on marijuana businesses serves the interests of Hamtramck’s majority of Yemeni and Bengali residents. Although the process wasn’t perfect, the goal was reached and marijuana investors now know the risk involved with their industry in Hamtramck.

However, some say the absolute language of the ban, along with the ambiguity left by a missed opt-out deadline, shows that the City Council’s decision just isn’t good enough. An effort led by Hamtramck resident Linda Ward established a petition to protest ordinance 2020-04, or the ban on marijuana businesses.

“I think we all were upset to see how [the marijuana ban] went down,” Ward said. “City Council didn’t address it appropriately when they should have. And now they waited until the 11th hour. Now we’re in a position where we are more than likely going to get sued… And that’s really the biggest motivation, I think, from my perspective.”

Linda says the goal of the petition isn’t necessarily to reverse or redo the marijuana ban ordinance. Instead, she says, it forces City Council to either reconsider the ban, or put the issue into a referendum.

Bill Meyer, Executive Director of OneHamtramck, is not necessarily emboldened by either side of the issue, but worries that this could cause a deeper divide among Hamtramck’s various communities. According to the city charter, when a petition is submitted with enough signatures, the ordinance the petition is protesting will be “suspended from operation, and the council shall immediately reconsider the ordinance.”

At the root of the issue for Meyer is about whether everyone’s political beliefs are being fairly represented. “And that’s what I feel is the ultimate issue,” Meyer said.

“The issue is justice here. Respect and justice, inclusion, not fighting each other. And it’s an ethnic thing whether you want to be an ally or not, it just doesn’t seem like a marijuana thing anymore.” 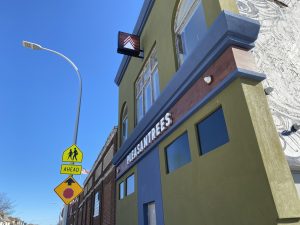 Ordinance 2020-04 was never a perfect solution

Despite the state-wide legalization, the number of residents who were against marijuana businesses in Hamtramck compelled city council to act. However, with two councilmembers unable to attend the opt-out vote back in 2019, the measure failed and Hamtramck never effectively voted against the marijuana industry before the deadline.

The point was dead until a Marijuana Dispensary, Pleasantrees on Holbrook Avenue, opened its doors for business. The community outrage compelled City Council to again consider an ordinance that would prevent any new marijuana businesses from opening in the city. But as the process moved forward, it was revealed that as many as nine marijuana businesses had already invested in a Hamtramck location.

City Councilmembers made an effort to regulate who was grandfathered in, and how they would be able to operate, but both efforts failed. One lawsuit was filed after a rumored marijuana business was denied a justifiable zoning variance. It was revealed to be a marijuana dispensary only after the business filed the lawsuit. 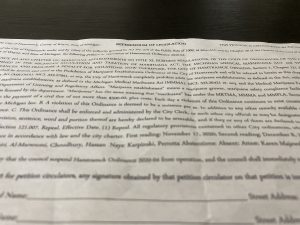 The petition has far-reaching implications

During the signature-gathering process, Linda Ward often posted to social media groups about getting signatures. A number of businesses, like Café 1923, kept copies of the petition for people to sign. Otherwise, 16 other volunteers would drive to someone’s home to allow them to sign the petition, if they request it. Councilman Ian Perrotta is among the volunteers.

At one signing, Ward drove to a resident’s home on the west side of Jos. Campau. They made small talk about COVID-19 and the marijuana decisions as the resident signed the petition. Once it was over, Ward took her pen and petition to walk back to her car and wait for another run.

“It’s very difficult with COVID,” Ward said. “You really, for something like this, you have to find people where they’re at.”

Ward and the other volunteers did door-knocking the previous weekend. By Tuesday, they were at around 200 signatures from door knocking, driving to petitioners and leaving petitions in public places. By Wednesday, they had reached the needed number of signatures, about 500, for the petition to force a reconsideration.

According to the city charter, the petition could suspend Ordinance 2020-04 until City Council “reconsiders” the decision.

“They have every right to put out a petition,” says Councilman Fadel Al-Marsoumi. “But if this petition stops the ordinance, my concern is that it offers marijuana businesses the chance to start a business in the meantime… Letting 500 people who aren’t elected dictate what happens to 20,000+ people is not what should be happening.”

Ward says the goal isn’t to reverse the decision, but rather to force city council to consider how these businesses should be regulated.

Throughout the process, Ward says that many people were reluctant to sign the petition. Many people were in support of City Council’s decision to ban marijuana dispensaries, but Ward says she often had to tell people that this was no longer the point.