Our graphic designer Zakaria Alhakami: Not even war can suppress talent

At a newspaper, visuals are sometimes as important as the content. They draw the reader in and amplify the message of articles. The design of a publication is the backbone of its character. At YAN, we are fortunate to have a dedicated, skilled graphic designer who forged a unique style for our newspaper.

They say a photo is worth a thousand words, but Zakaria Alhakami draws with words to magnify their editorial value. From “Happy Yemen” that has tragically turned into “war-torn Yemen”, Alhakami has been braving the storm of bombs and difficulties to create the designs you see at your news stand, halfway across the world.

Below, he tells his own story. 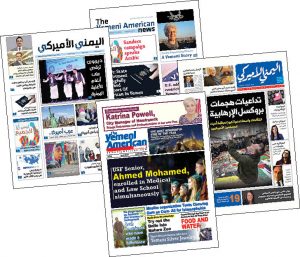 I began working for the Yemeni American News during the most intensive bombing of Sanaa in 2015. With power cuts and internet blackouts, I got used to working in the dark, literally.

I used to work on more than one laptop to take advantage of their battery life.

It has been an interesting journey.

My name is Zakaria Alhakami. I am a graphic designer living in Sanaa. Back in 2015, I received a call from my dear friend Yasser Al-Arami – who was the editor of the Yemeni American News at the time – to work on a new logo and a new look-and-feel for the newspaper.

I immediately began to do the necessary work to impress the editor with my graphic design talent. I was then tasked with designing the full issue of the newspaper. My excitement was met with the realization of the difficulty of the challenge – not just to do my job, but to do it without electricity or internet while the bombs are falling on the city.

In the morning after a long night of submerging myself in organizing content for the newspaper, I woke up to the bleak and shocking situation of our real life.

There was no power, so I had to run the generator late, disturbing my neighbors. Time was precious. It meant hard-earned minutes from the life of a laptop battery. The transition from one computer to another was challenging, even scary. I always feared that pages would get mixed up, which meant more editing on the complete pages.

And there was another fear, a more real one – fear for my life and beloved ones.
The thought of an air strike hitting my building was not unwarranted, as the bombs where descending all across the city. This type of work requires cool nerves and a quiet environment. It was terribly difficult to focus. But I was determined to put forward my best work. 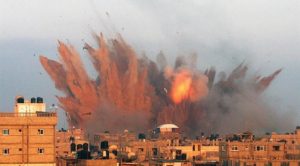 Despite the hardships, it has been a rewarding experience. I love my work for the Yemeni American News and find it enjoyable.

One of the perks of the job is communicating with the team in the U.S. Fortunately, the publisher has a great sense of humor. He is always cracking jokes while we are working on the newspaper, making it comfortable for me to put pages together and helping me for a moment forget the current situation.

The first deadline felt like I was in a horror movie. The laptop’s remaining battery was about to die, and the internet was slowly expiring (we have prepaid internet cards here). The power generator was also about to run out of gas.

The Internet here in Yemen is modest, to put it diplomatically. An upload of 1MB would take a few minutes, sometimes up to five minutes or more. I would need more than an hour to send a 60MB-file, while the editing team in the U.S. expects it instantly after each edit when reviewing the issue.

When the laptop battery gave up, I went out in the morning to my neighbors to borrow their generator. As soon as I got to the generator the entire internet connection just vanished in my area.

I had to tell the editor and the team in the U.S. that I’ll be moving to another location, hoping to find an internet hotspot. Most internet shops had closed their doors because of the war and the blockade. After contacting many people, I finally found a friend who had an internet cafe with a connection – possibly the last in Sanaa.

I quickly drove down to his cafe, uploaded the files and informed the team. I came back home to my wife and kids and I was relieved that the designed issue was delivered on time, hoping that the team in the U.S. would like my work.

I enjoy working with the team and I appreciate their understanding of the current situation here and hope to keep delivering quality work to this great audience.