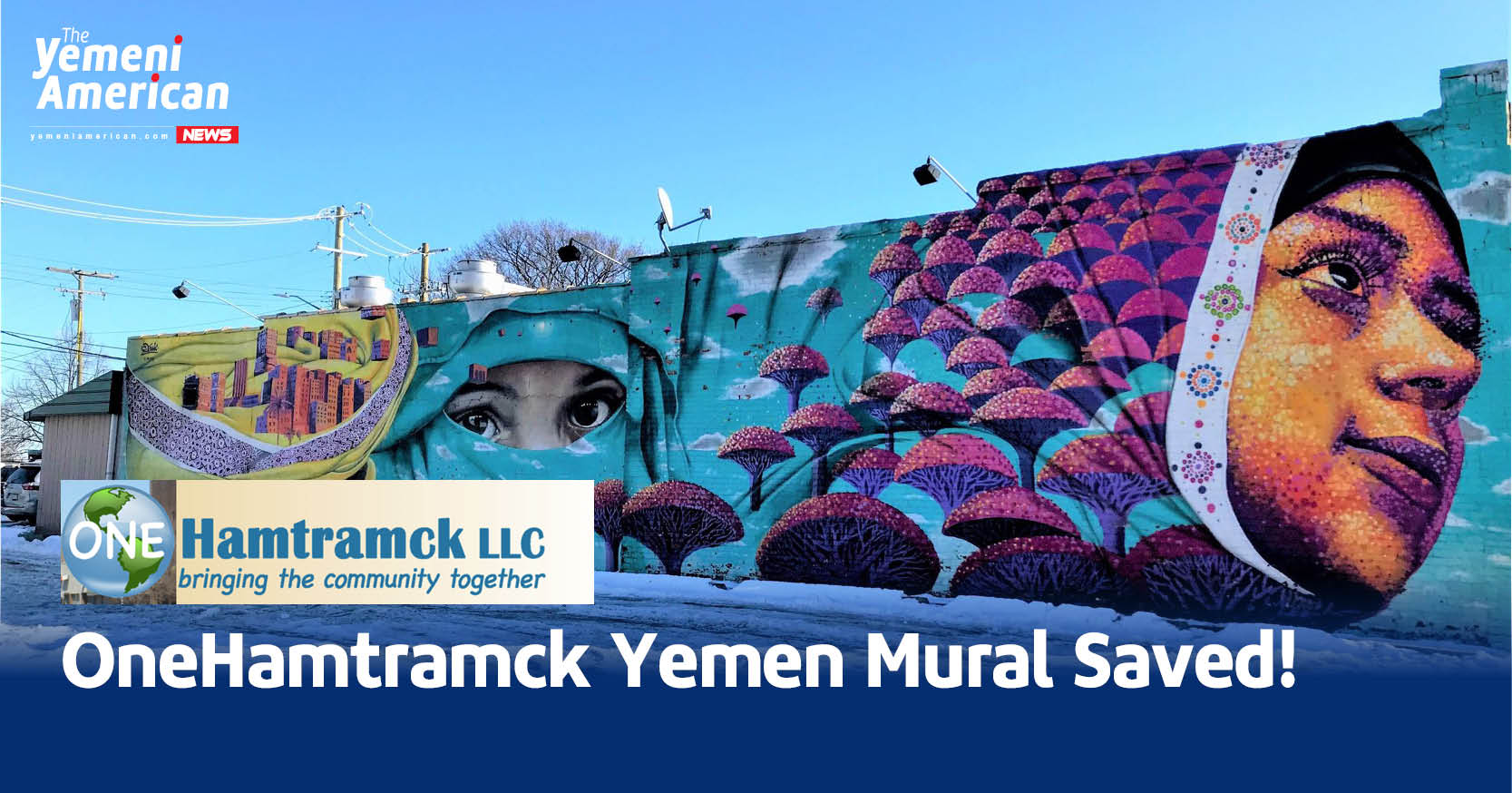 Bill Meyer, Exec. Dir. One Hamtramck
HAMTRAMCK, Michigan – After almost 3 years of complicated negotiations and hard work, paperwork was signed today that will save the iconic Arab Mural on the wall of the Sheeba Restaurant on Joseph Campau in south Hamtramck, dubbed the heart of the Yemeni community. In addition to preserving this iconic mural, the agreement also provides a viable business solution for the owners of the lot, who had intended to build in front of the mural, completely covering the art.

Commissioned in 2011 the mural was the first public art project of the city’s only self-proclaimed social justice organization, OneHamtramck. Fundraising, artist selection, design development and other work involved in the completion of the project was executed by Yemeni residents and supporters, with input provided by a large segment of the Yemen community.

Painted in 2013 by the renowned Chilean muralist Dasic Fernandez, the mural depicts three figures – a farmer, a child, and a young woman – each enveloped in imagery representing the rich and historic culture of Yemen. The folds of the farmer’s turban transform into hills that support iconic Yemeni structures, including the world’s first skyscrapers. In the center, the child’s veil appears to be sewn from the sky, which the artist intended to symbolize freedom. On the right, the young woman with a hopeful gaze wears a head scarf patterned by trees unique to Socotra, an island off the shores of Yemen. This deeply meaningful work of art became the first mural Fernandez painted with a Middle Eastern theme, a cultural exchange that speaks to the power of Hamtramck’s diverse community.

The OneHamtramck “Save the Mural Committee” was formed on February 9, 2019, when members learned that the owners of the empty corner lot in front of the mural, Ali Alzubairi and Ayad Almardahi, had filed papers to develop a two-story building that would completely block the artwork from public view. Local activists, including Bill & Twyla Meyer, Abraham Aiyash, Mohamed Alsomiri, Kit Parks, Linda Rayburn, Alisa Perkins, Hanan Yahya and others,, jumped to action in attempt to find a solution that would preserve the mural while allowing the lot owners to expand their business in another location.

The eventual solution required 6 phases: the sale of two lots behind the mural to Ali and Ayad; making the one-way side street two-way up to the alley; re-zoning the two lots and merging them into one. The most difficult phase entailed developing a Lease Agreement that would be acceptable to all parties. With all parties working in the spirit of compromise and determination to find a win-win solution, the document was signed today. With the help of local activist Nasr Hussain, the Islamic Center of Hamtramck stepped forward to sign the 20 year lease, because OneHamtramck wanted the project to eventually be managed entirely by the Yemeni community.

During the long process of finding the solutions, many things happened: Abraham Aiyash was elected State Representative for the 4th District in Michigan; council members were elected and replaced; and COVID wreaked havoc with the community for over a year which stopped most everyone in their tracks. While Islamophobia was surging in the US, thousands of Yemeni people were being killed back in their home country during the bitter civil war that is still raging on.

“I am incredibly grateful for the collaborative spirit that so many displayed during this process to preserve what is now an historic icon for the city of Hamtramck. Art is a beautiful way to share culture and this mural embodies that spirit,” says Bill Meyer, founder and chairman of OneHamtramck.

The mural is most of all a symbol of hope and community. It was painted in this location to pay respects to and draw attention to the largest ethnic group in the city that had been badly marginalized for decades. The intent was to draw attention to the beauty of the people and their culture, draw outsiders to local businesses and help develop the area that would in turn benefit ALL the people of this most diverse city in Michigan. Visitors travel from across the nation and the world to see this one-of-a-kind mural about Arabs, specifically Yemenis, that pays respect to their history and culture. It develops understanding across communities and brings people together.

“Yemen has gone through one of the worst humanitarian crises in modern history. The war has destroyed many parts of Yemen’s rich history and more importantly, has taken the lives of so many. This mural helps connect the many immigrants and refugees stay connected with so much of that culture and history and tells a story of the Yemeni people’s resilience,” said State Rep. Abraham Aiyash.

Now that the lot is being leased for 20 years by the Islamic Center of Hamtramck, a Yemen Park committee headed by OneHamtramck’s Abraham Aiyash, will be created to help develop the space in front of the mural to enhance the beauty of the painting and further represent the many highlights of Yemeni culture. “Although a long and tedious process, I am incredibly relieved that this Hamtramck treasure will be preserved for us to continue to appreciate,” said Rep. Aiyash. “We are excited about the development of an exciting project in front of the mural that will continue to uplift Hamtramck’s diversity that allows us to come together to share our similarities, and celebrate our differences.”