Melvindale Soccer Player shines on and off the field 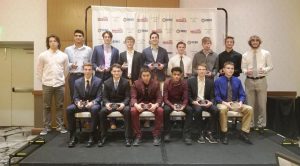 It’s what he achieved at Dearborn Schools and Melvindale High school that easily show Fouad Noman’s talents: reaching the state finals with his team for a second-place award. Getting all districts, all regionals and all-state team – All signs of success. Now that he’s reached the end of his high school career, he reflects on everything. He has a serious commitment to his family and siblings, especially with his father working out of state. But Fouad is also looking forward to eventually graduating with a degree in engineering.

Fouad came from Yemen when he was 10 years old. He started playing soccer with MYSA in the South end of Dearborn. During his time playing with MYSA, he played and traveled around the United States with one of MYSA youth teams. He’s even enjoyed his fair share of individual and team-wide awards. During his freshman year in high school he played for Edsel Ford High School. He then moved to the city of Melvindale, where he joined the Melvindale High School Soccer team. With his teammates, they were able to play well and finished second place in the state championship.

“It was easy for us to reach to the finals because we had help from our school administrators as well as our community and coaches,” Fouad said. “Even though we lost the finals and didn’t end up getting first place in the second division, I was able to score 23 goals this year.

As for his local and global stars, he says: “My star in the local community is Hammam Nasser, and globally it’s Messi.”

Off the field, Fouad takes his academics seriously.

“My grade point average is a 3.5,” Fouad said. “And I’m good with that. I dream to become an engineer.

Mohamed Alrayyashi, Fouad’s coach in MYSA, had this to say about him: “Fouad is a great player to be proud of, he plays with us as an attacker. He has great skills that he uses inside the field. He does not have any problems with his teammates, he only focuses on the ball and how he is playing inside the field and all his focus is on that only. I have known Fouad for more than five years, ever since he first came from Yemen.”

Because Fouad’s father works outside the state, he’s needed to miss some important opportunities for the sake of his family. Something like joining an Academy team, a coveted place among youth soccer teams, stayed outside his focus.

“Fouad can be a star in high school and he is indeed a promising star and his achievement in the schools’ team is proof of that. He will keep playing with his community club until his opportunity comes. And there’s the fact that sports will qualify a person to be a leader in his society.”

Saleh- one of his teammates and played with him for the MYSA team says there’s no one who plays like Fouad. “He is a unique player,” Saleh said. “And if it weren’t for his circumstances, he would’ve been in the best academy team. But it is enough that he is our favorite star.”

“I supervised him this year with the school team,” Belba said. “This is his second year with the school and the team. He is the team striker, and he did something remarkable during the season. He is fast, smart and focused and does not leave a chance to be missed. And he’s also good at playing with his teammates. Not an individual player but a team player. He also has won awards during the season and deserves them. I will continue with him next year”.

It’s important for Fouad Noman to receive support from our community for his success. He says this is what motivates him to achieve more in order to work harder in his sport. Hopefully with his success, it will encourage other youth of the Yemeni and Arab community everywhere in the United States.