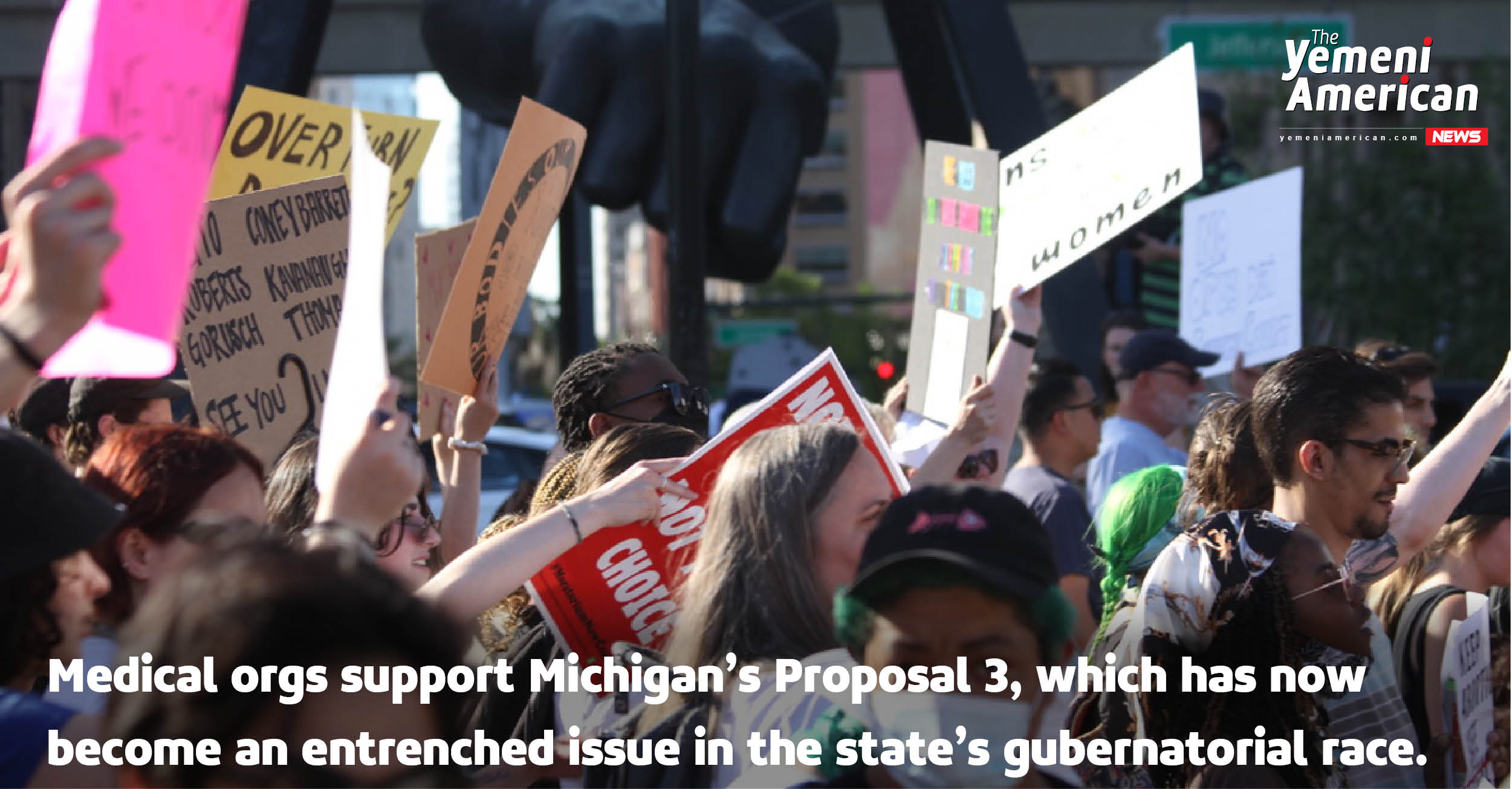 Scene from the protest in response to the overturning of Roe V. Wade (Photo by Simon Albaugh)

Detroit, Mich. – With the midterm elections coming in just over a month, Abortion access has become a centerpiece in many of the political battles happening throughout the state. At the center of it is the nonprofit organization Reproductive Freedom for All, which is responsible for the question of abortion access appearing on the November ballot.

In a press release provided by Reproductive Freedom for All, the group outlined a large number of state and nation-wide medical organizations that are in support of Proposal 3 – the proposal seeking to codify the right to abortion in Michigan’s constitution.

“Saying that reverting to a 1931 abortion law would tie their hands from delivering the crucial medical care and trusted advice patients need, several health care organizations announced Tuesday their support of Proposal 3, the Michigan ballot measure to restore reproductive rights,” reads the press release provided by Reproductive Freedom for All.

Those medical organizations, which include the American College of Obstetricians and Gynecologists, the Committee to Protect Healthcare and the Society for Maternal-Fetal Medicine, all have released statements in support of Proposal 3, which would codify abortion protections in the Michigan constitution.

“Restricting abortion access will affect our members’ ability to make ethical and professional decisions in the best interest of their patients,” said Samantha Berg, state advocacy manager for the Society for Maternal-Fetal Medicine.

This is echoed by Dr. Gregory Goyert, a fellow of the American College of Obstetricians and Gynecologists, as well as a member of the Society for Maternal-Fetal Medicine. Worried that the 1931 trigger law would force Michigan’s healthcare providers to refuse care in the case of a pregnancy that endangers the life of the mother, Goyert says this would be “dangerous for the women of Michigan.”

“Women and healthcare providers have relied on the protections of Roe for nearly 50 years to use best practices when pregnancy complications arise,” Goyert said. “Returning to 1931 medicine is dangerous for the women of Michigan.”

Reproductive Freedom for All initially made headlines after garnering a record-breaking number of signatures in support of placing Proposal 3 on the ballot. Their goal is the passage of Proposal 3, which would codify abortion access into the state of Michigan’s constitution. According to a recent poll, 64% of respondents said that they intend to vote in favor of the proposal.

“This outpouring of support is indicative of the urgency many medical professionals have told us they feel for passing Proposal 3,” said Darci McConnell, communication director for Reproductive Freedom for All. “Because they don’t want to be restricted by a 1931 law that bans medical options detrimental to caring for their patients.”

The Abortion Issue on the Campaign Trail

Whitmer has been an ardent supporter of Abortion Rights in Michigan. Her campaign has used this as a centerpiece in election advertising that’s meant to attack Republican Challenger Tudor Dixon’s stance on the issue.

Dixon and some media outlets have criticized the advertising from democratic-leaning organizations. Although Dixon is against abortion, even in the case of rape or incest, the advertisements may have been misleading, according to Bridge Michigan. With Proposal 3 being the deciding factor, rather than the next governor to be elected, Dixon has taken advantage of the proposal as well.

“And just like that you can vote for Gretchen Whitmer’s abortion agenda and still vote against her,” reads a Sept. 8 tweet by Dixon. “Gretchen, time to stop hiding behind your BS ads. I’m here to clean up your mess, turn our schools around, stop your crime wave, fix the roads and bring back the jobs you cost us.”

In response, Whitmer tweeted that the state’s workforce doesn’t want to stay in a state where the right to abortion is under attack.

“When women cannot chart their own destinies, the effects are felt far and wide,” Whitmer tweeted. “Young, hard working people do not want to stay in states hostile to their rights. I’m standing with you in our fight to protect abortion rights here in Michigan.”

Current polls show that Whitmer has a staggering double-digit lead. However, the gap between Whitmer and Dixon is slowly closing in. What started as a 57% – 22.5% split in June of this year has now closed to a 51.3% – 39.1% in some of the latest polls published by abc news.

The question of whether abortion should be codified into the Michigan constitution may be one of the many deciding factors for who leads the state for the next four years.