Making Hamtramck Home: Bangladeshis reflect on the journey to the town 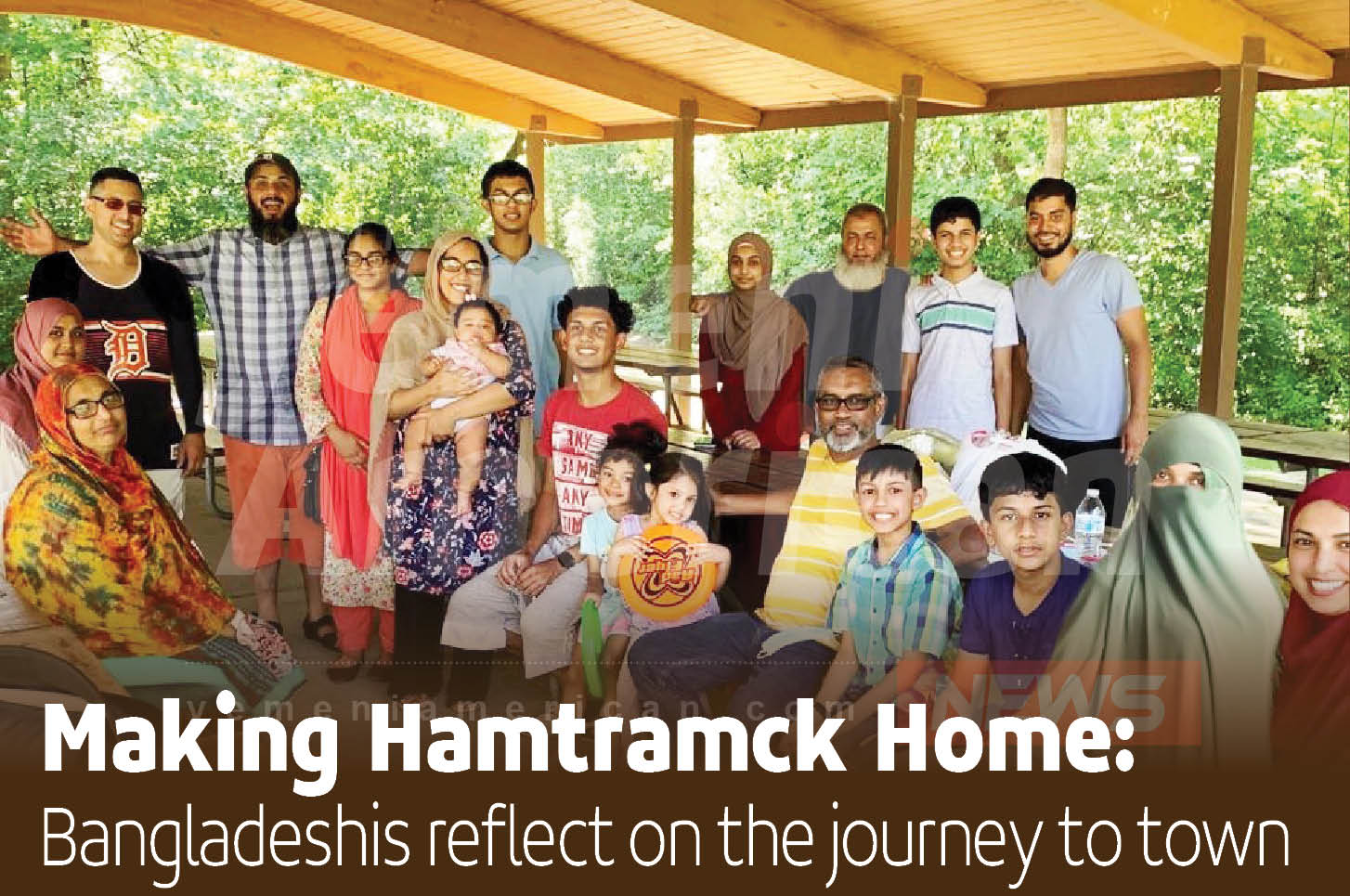 In 1969 Nizam Uddin Ahmed, owner of Fair Sky Travel in Hamtramck, moved from East Pakistan, now Bangladesh, to New York on a student visa. In 1970 the Bhola Cyclone wiped out thousands of people and homes in the deadliest weather event in history according to the World Meteorological Organization.

“When I was in the 11th grade at that time, Bangladesh was devastated by a severe cyclone that killed thousands of people and thousands more were homeless and hungry,” he said.

Nizam raised relief funds with the help of Mr. Fish, a Jewish history teacher at Seward Park High School in lower Manhattan, New York, to send through the East Pakistan League of America. Little did he know that thousands more would be killed in the Bangladesh Liberation War of 1971.

He joined New York’s Bangladeshi community to rally, “against the killing of Bangalis by the West Pakistan Armies,” in front of the United Nations. He hoped to aid the liberation movement on the ground but was drafted to the U.S. Army in 1971, serving until 1974.

In September 1976 Nizam moved to Hamtramck. He worked for the Ford Motor Company in 1977. He was one of the few Bangladeshis here. In 1988 he opened Amana Poultry, located on 11217 Conant St., in 1988, a halal poultry store, which he believes was the first of its kind to be owned by a Bangladeshi in North America.

After eventually selling his share to his brother and partner, Nizam opened the travel agency Fair Sky Travel in 1993 to serve a growing Bangladeshi community.

“I was fascinated with travel,” he said. “While I was in the US Army I used Delta, North West, and Piedmont Airlines many times during the holidays and vacations to and from Augusta, Georgia and Ft. Hood, Texas.”

“Alhamdulillah I am the only Bangladeshi full Service Travel Agency (IATA/ ARC) in Midwest USA of Bengali ethnicity approved by Hajj Ministry of Saudi Arabia,” he said, referring to umrah and hajj travel packages.

Like Nizam, Shiree Ahmed’s father came to the United States in the 1960s. He worked for the Ford Motor Company, and then later brought his family to Dearborn, Mich. in 1973. Shiree, a retired computer analyst, married neurologist Kawsar Ahmed, MD, in 1980 in Bangladesh. He joined her in the United States a year later – and travels back and forth between work and holidays.

Shiree’s family is from Deulgram, Beanibazar in Sylhet, Bangladesh. Kawsar’s family is from Assam, India. “My family fled by foot during the partition,” he said. They relocated to Khaystorail, Sylhet during riots between Muslims and Hindus, leading up to the India-Pakistan War of 1965.

In America, Shiree and Kawsar lived in Dearborn for a few years before they purchased their first affordable home in Hamtramck in 1993, wanting to be closer to the budding Bangladeshi community. “We didn’t have any culture around us in Dearborn,” said Shiree. Many of her relatives in America lived in New York.

Shopping for Bengali groceries was difficult, said Shiree. The family stood in long lines at Eastern Market, the only halal butcher they knew. “We drove to Chinese grocery stores for certain spices and fish,” and found a family-owned fish vendor on Cass Avenue in Detroit for shutki, or dry fish, a delicacy in the Sylheti cuisine.

The family has been living in Hamtramck for 27 years. “Bangladeshis started expanding their businesses and now we have a whole community catering to Bangladeshis,” Shiree said.

This expansion is part of the reason attorney Nusrat Hussain’s family moved to Hamtramck in August 2002. Hussain is an attorney with Freedom House Detroit, a shelter for asylum-seekers. Her family came during what’s known as the second migration, Bangladeshis moving en masse from New York to Michigan for a better quality of life.

“Living in New York increasingly became more expensive for my parents. Rent was $800 for a one-bedroom apartment (what a steal nowadays) but it was only going to increase if we stayed. We had a distant family member who moved to Hamtramck the year or two prior to us and told us about how much better living conditions were,” said Hussain.

Hussain left behind family in New York and had to adjust to life in a smaller city.

Her father came to the United States from Sylhet following in his older brother’s footsteps (who lived in Canada) to pursue a better life in North America. “They did not have the opportunities in Bangladesh or India that would help them create the life they envisioned for themselves, individually,” she said. Her mother is from Assam, India.

She said distant relatives helped them settle into Hamtramck. Her parents struggled to find jobs and transportation. “We never needed a car before we came to Michigan. My mom would carpool to her factory job… She worked toward getting her license and my dad buying his first car…”

“As a Bangladeshi, specifically Sylheti, it felt like there was a really strong sense of community and unity. I knew no matter where I went in Hamtramck, I would find my people, whether that be a grocery store or a doctor’s office or school,” she said.

Bangladeshis have come a long way – taking up several city council seats in the past few years. They make up 24.3 percent of the city’s population as of November 2019, according to information obtained from PIAST, which tracks Census data.

Hussain says many of the people who lived in town moved out to the suburbs. “There are younger, working professionals of all races in Hamtramck now.”

Similarly, she is one of those professionals giving back to the community as a pro bono attorney.

“Growing up in Queens and Hamtramck subconsciously directed me towards working with low-income BIPOC and immigrant communities. I knew the challenges that came with not having access to adequate services or  assistance because you are limited by your resources (language/transportation/money, etc).”

Hussain says she plans to stay in town. During undergrad at Ann Arbor Hussain realized how much she missed the diversity of the city. “In the summertime you can see everyone walking around town and just hanging out, getting some ice cream at Burk’s Igloo, walking to the mosque or the grocery store. It just feels like a warm and welcoming place to be.”

“If I continue to live in Michigan, I can only imagine living in Hamtramck or Detroit. There is no place in the entire state of Michigan that is like Hamtramck,” she said.