DEARBORN, Mich. — Dearborn’s state senator won a prestigious award from the state Capitol news reporters and sat down with the Yemeni American News to discuss what it all means for her and her district.

The Michigan Information Research Service (MIRS) might not be a household name, but to news reporters, it’s the gold-standard for journalism in the Michigan Capitol in Lansing. The service is similar to the Associated Press, providing news stories and information to other news outlets like newspapers, television stations and radio stations, and it’s the way many local newspapers keep track of what’s going on in Lansing without needing a team of five reporters. Most people in Michigan have read their stories without even knowing it. When the grizzled reporters at MIRS give someone a “Legislator of the Year” award, it’s because they all agreed that person was the most effective among her classmates in the legislature.

This year, Sen. Sylvia Santana, whose senate district includes Dearborn and Detroit, won the “Democratic Legislator of the Year Award” and Samantha Shreiber, a Lansing reporter, described why in a recent podcast.

Shreiber says that Santana won the award because she passed four public acts this year, several of which deal with criminal justice reform and decriminalization. She also played a critical role in voicing the concerns of the people, passing a resolution to call racism a public health crisis, which was later adopted by Gov. Gretchen Whitmer and cities across the state of Michigan.

“I think people were on the streets making demands and Sylvia provided a voice to that,” said Shreiber. “She’s been a true professional and inserted herself into discussions where she feels there needs to be a diverse voice.”

Earlier this year, when Trump administration officials came to Lansing to make baseless claims of voter fraud in front of the Michigan Senate Oversight committee, Sylvia volunteered to serve on the committee, because there were no black legislators or legislators from Detroit on the committee, and she wanted to make sure the city had representation.

Kyle Melinn, the editor at MIRS, said that Sen. Santana “has a knack for knowing when to call out Republican colleagues when they’re out of line, but she’s also good at working with them to accomplish common goals.”

The Yemeni American News sat down with Sen. Santana to discuss the award, as well as her recent accomplishments.

YAN: How does it feel to be the ‘Democratic Legislator of the Year?’

Sen. Santana: It’s an honor and a privilege to be a recipient of the Democratic legislator of the year award.

YAN: What has informed your approach to legislating in the [Democratic] minority that has made you so effective?

Sen. Santana: I think I try to establish a relationship with everyone and find out what is important to them. In addition, I try to make myself available in spaces where the work is really getting done.

YAN: You’ve had several public acts passed this year, many of which are related to criminal justice reform. Why is that a passion of yours?

Sen. Santana: I like to say ‘God has a funny sense of humor,” Brian, and for me it’s a passion that is geared toward my parents. Both of my parents, at some point in my life, have both been incarcerated. My father was a veteran and served for an opioid addiction and kept going in and out of prison because he was trying to fund his heroin habit. My mom made some rough choices in life and spent some time in jail as well, so I think, you know, life is ‘full circle.’

That’s why I’ve been the perfect person for this work. I think when you look at our communities across Michigan, Michigan is one of the toughest on crime and locking people up. We lock people up for not being able to make bail on minor violations such as traffic violations and things of that nature. I think that this is the right work to do and the right timing, and if we want to move the Michigan economy forward we need to make sure that we are on the right side of history when it comes to criminal justice reform, and we have to make sure we’re setting people up for success. That’s why this work is so important to me.

YAN: In terms of Dearborn, you recently presented to the school board because you had helped bring a significant amount of money to our schools. That’s something impressive in and of itself aside from enacting new laws. Would you be willing to reflect on how that kind of work as a State Senator can impact the community?

Sen. Santana: I think when you look at school funding, education is the key. Investment in our school system is rather important in making sure that our kids succeed and they have the opportunities – any opportunity – to be what they want to be, regardless of the neighborhood or community that they come from. When you look at the last 2 years in the legislature, or even before that, during my years in the house, we’ve had quite a few instances where refugees came into the community who needed support with English being their second language, and many of their parents need support as well. I think that our Title 31A dollars, which is for at-risk communities – those are very important in making sure our kids succeed in Dearborn as well as throughout my district.

When you look at the fact that we have just gone through and are still going through a pandemic – one thing that was discovered is that for some kids, the two meals per day they get at school might be their only meals. So, the feds coming down and providing those resources to our community was very important. Advocating for those dollars within the state budget is definitely necessary to ensure that they are distributed not only to Dearborn but to other areas with a large population of children. We want to make sure those resources are available throughout the pandemic.

There was also a technology gap for some children, and so that was also necessary for [us to get] resources and funding. So, I will continue to fight for my district in those manners, because I know if I’m not fighting for it – who is fighting for it in our community?

YAN: This last year you’ve managed to be at the center of almost every major event in Lansing. The images of you in body armor in Lansing during the “armed protest” that occured at the Michigan Capitol building were something that impacted a lot of people. You were also there for the major hearings with Rudy Giuliani and whatnot – what does it feel like to have been at the center of all these whirlwind events? Do you think you’re doing a good job in those moments representing your district?

Sen. Santana: Absolutely! I was reflecting on some events that happened recently in Australia, I think back in 2019, where people of Middle Eastern descent, Muslims, were killed in Australia. And we look at today, people coming up to the Capitol and expressing hate while using symbols of hate – like nooses, swastikas, and the Confederate flag – I think that we are still in a dangerous time in our country where people still feel those deep-rooted angers and hatreds. 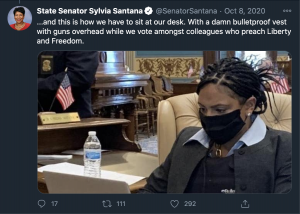 Me putting on a bullet-proof vest was just reflective of what was happening in the gallery. You can’t have people above you with AR-15’s, sitting in a gallery, and do your job effectively for the district you represent.  Unfortunately, that was the case – it’s not something I ever wanted to do  – but I wanted to get home to my children after doing all that great work for my community. I think, being at the forefront of that issue, we did discover later on that they had additional plans to kidnap the Governor and take hostages in the Capitol. Shedding a light on that issue was very pertinent for that time and it is still pertinent.

You see in Oregon, where constituents were angry at the Oregon legislature and they tried to attack the legislature and in addition to that they damaged some of the Capitol building, while proceedings were going on for the assembly there. Everything that has transpired is not without merit – yes, I have been at the forefront of that – but it’s about what’s right and doing what’s right for our community.

YAN: Tell us about the Oversight Committee meeting hearing, the one that was later re-enacted on Saturday Night Live [For the state house portion]?

Sen. Santana: …On the Oversight committee, we have no representation for Detroit on that committee. Since Detroit was on the forefront of that conversation, I felt it was important to listen, as well as to ask questions of the individuals coming forward to allege that there was fraud during the election process. As lawmakers, we have to inject ourselves in these spaces, especially so that there is a voice to ensure that our interests are protected. As someone who represents Detroit, Dearborn and Melvindale, I feel it is my duty to do that. In that instances, I felt it was necessary [to ensure I got on the committee.]

YAN: What kinds of things are you looking forward to doing next year in the Michigan Senate?

Sen. Santana:  I think criminal justice reform has been the pinnacle of getting things done in 2020, and that work does not stop, but I will continue to help and support those efforts as well. One of the biggest things we will dive into this next year is healthcare. As we’ve seen through this pandemic, there were a lot of challenges that our hospitals had, we had issues with our prescription drugs being imported, as well as our supply and resources that were available for our hospitals.

In addition to that, COVID has impacted our economy, and there is a lot of work to make sure our economy is moving in the right direction so I’ll be working diligently on those two efforts, but in addition, in the background, still working on criminal justice reform.

YAN: Thank you very much Sen. Santana, and on behalf of the Yemeni American News, Merry Christmas, and I hope you have a Happy New Year.

Sen. Santana: Thanks, you too, Brian, and I hope you have a happy holidays as well.