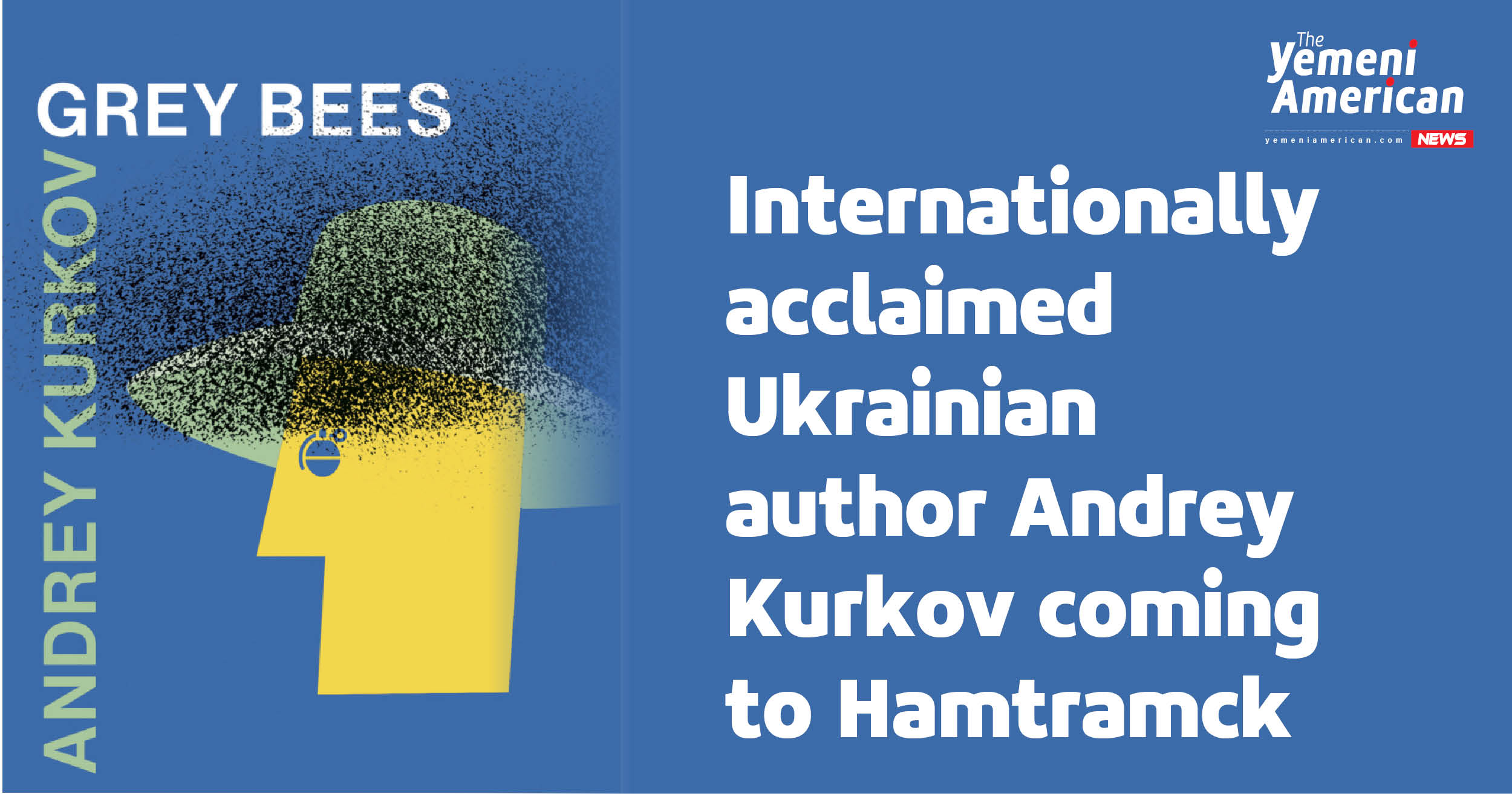 HAMTRAMCK, Mich. – Andrey Kurkov, Ukrainian novelist, poet, screenwriter and activist, will be visiting Hamtramck’s independent bookstore Book Suey for a reading tomorrow, May 10, at 7:00pm. He will be reading from his most recent novel, Grey Bees, about a beekeeper who chooses to stay in a war-torn city along Ukraine’s eastern border.

Kurkov is an internationally acclaimed writer. Throughout the Russian invasion of Ukraine, he’s been interviewed by the Guardian and profiled by the New York Times. His books have been reviewed in the LA Times, and his translated writings have been distributed by some of the most prestigious publishing companies in the United States. Needless to say, he’s been one of the most important voices in Ukrainian literature over the past decade.

So it’s no surprise that he’s been a vocal critic of Russian propaganda throughout the 2022 invasion of Ukraine. While growing up in the Soviet Union, Kurkov’s own brother was a dissident against the Soviet government. In an article that’s soon to be published, he writes that the propaganda system has been used to systematically destroy the Ukrainian culture and language.

“In order to Ukrainians not to exist, for Putin to be right, Ukrainian culture and the Ukrainian language must be destroyed,” Kurkov wrote. “A person who has lost his native language and native culture becomes a slave of the colonialists much easier than a free person who knows his culture and the history of his people.”

In the world of literary figures, Kurkov says the Russian and Ukrainian cultures could not be any more different. In the world of Russian literature, the authors are serious about conventions of realism, opting to have their characters suffer through life’s challenges. But Ukrainians, as Kurkov puts it, had a different approach in literature.

“In Russian literature, there were no traces of magic realism, of magic, satire of the society,” Kurkov said. “And it was only present in Ukrainian literature because actually, the Ukrainians were always more creative, more inventive, and they wanted to create parallel worlds. I mean, it was easier for Ukrainian writers to invent surreal situations than for Russians. Russian writers were always very serious and very realistic.”

Kurkov draws from a long history of Ukrainian writers like Mikhail Bulgakov and Nicholai Gogol. Bulgakov, who wrote a story about the devil coming into Soviet Moscow in the Master and the Margarita, was considered a master of satire and magical realism, both genres that have influenced Kurkov’s writing.

As the Russian invasion of Ukraine continues, Kurkov believes that this will only serve to further the division between Ukraine and Russia’s cultures. Contrary to Putin’s efforts, Kurkov explains, the invasion will only further differentiate those elements that are unique to Ukraine.

“The events now, they are reinforced in Ukrainian identity as well as in people of other ethnic origins and groups,” Kurkov said. “I mean, many people who were moderately pro-Russian, or who were interested in Russian history and culture and had the family ties, they are now becoming as anti-Russian as anybody else.”

As the events surrounding Russia’s invasion continue, Kurkov famously said that he’s taken a break from writing fiction, telling NBC that “now is not the time for fiction.” Instead, Kurkov has been focusing his current efforts on articles and diary entries.

“Everybody wants to know now what is happening in facts and not in writers’ imaginations,” Kurkov said. “So that’s why the nonfiction is becoming much more important than fiction.”

Still his most recent fiction has been grappling with the recent history of Russia’s conflict with Ukraine. In Kurkov’s novel, Grey Bees, the protagonist Sergei Sergeyich travels to Crimea where he is witness to the challenges of the Crimean Tatars under the Soviet Governance.

Said to have elements of both Fable and Epic, Grey Bees has received praise from around the world. It’s been longlisted for the Dublin Literary Award, with the Dublin Library asking: “Who better than Ukraine’s most famous novelist to illuminate and present a balanced portrait of this most bewildering of modern conflicts?”

Kurkov says he will write fiction again, but that the world now needs writers who can chronicle the facts. Kurkov is currently working on a diary and continues to publish articles and essays.

“The fiction will be written when these events will become part of the history part of the past,” Kurkov said.