In D.C. And Detroit, Two Sisters March for a Shared Cause 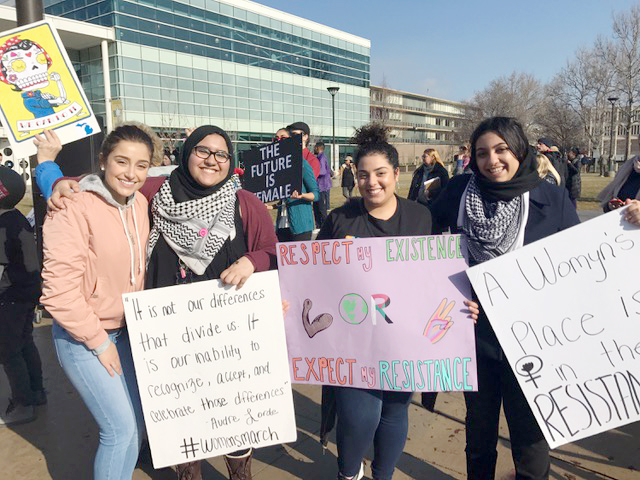 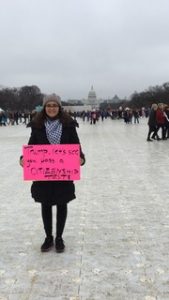 When it became clear that Donald Trump would become the 45th President of the United States, Aayat Ali, 24, looked back on the charged rhetoric leading up to his victory. “His calling Mexicans ‘rapists’ and ‘criminals,’ and then turning it around to say refugees are ‘terrorists,’ that they don’t do this country any good, his attack against the Khan family,” Aayat reflected. “These were all events that happened during his campaign that pushed me.” It was a troubling turn of events for the University of Michigan graduate student, who is currently working on a dual masters degree in social work and urban planning, with her eyes set on a career in refugee resettlement and prison policy reform. The day after the election, she heard that people were mobilizing in opposition to the incoming administration. “I’m not on any social media, but my friend texted me what was going on and I heard about it through word of mouth,” Aayat said. “That’s when I started to solidify my plans to make my way to D.C.” Two months later, only a day after President Trump took the oath of office, Aayat got in a car with three of her friends to join tens of thousands of other Americans in the Women’s March On Washington.

Originating with a Facebook group started by a retired grandmother in Hawaii, the Women’s March On Washington rapidly picked up traction on social media, gaining legitimate organizers with a diverse group of co-chairs, including Linda Sarsour, the executive director of the Arab American Association of New York. According to the event’s website, the march aimed to send a message to the new United States government on its first day in office, and to the world: that women’s rights are human rights. 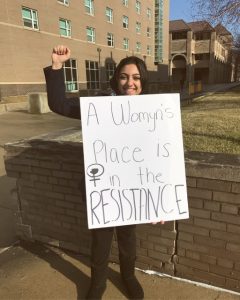 Back in Dearborn Heights, Aayat’s sister Noura Ali, 17, was having similar feelings of trepidation. To her, Trump’s campaign promises to bar Muslim refugees and immigrants from the United States was a personal affront. After fleeing the Hussein regime in Iraq, Aayat and Noura’s father came to meet their mother in Iran, though he would once again find himself at odds with the government in power, speaking out against the Ayatollah. “My father was imprisoned for two years, and then the U.N. contacted my family and told them to go to Syria,” Noura said, where her family would stay for more than five years awaiting clearance from up top. “Finally, in 1996, they were granted to come here to Detroit.” Though Aayat and Noura’s father was an engineer in Iraq, he worked his first years in America as an ice cream truck driver. Shortly thereafter, Noura, the youngest of her six siblings, was born.

When Aayat told her mother that she would be going to Washington, D.C. to take part in the Women’s March, she got a mixed reaction. “She was very excited, but very nervous about me going,” Aayat said. “She was terrified of the thought of me being in a demonstration because I’m Iraqi and Iranian, and in Iraq if you’re in a protest, it could be the end of your life.” In the end, Aayat’s mother was happy that she was advocating for the cause. During the march, she held a sign that read “Trump, let’s see you pass a citizenship test,” calling back to her own family’s history of immigration to the United States. Though Noura did not attend the Washington, D.C. march with her sister and the other half a million demonstrators in the city, she joined thousands of supporters in Detroit in one of the many protests across the country. Though there is no exact estimate, it is believed about 3.6 to 4.6 million people in 550 cities around the world participated in the Women’s March.

On the campus of Wayne State University, Noura had mixed feelings of the event. On one hand, she found solidarity with the march’s message of feminism and equality, but on the other, she could not help but notice a certain degree of hypocrisy on display by some of the march’s demonstrators. “Me and my friends were chanting, ‘Say it loud, say it clear, refugees are welcome here,’ and it wasn’t catching on,” Noura said. “But the same people were holding signs that said ‘We the People,’ with a hijabi girl with the American flag on her head.” To Noura, the Women’s March represented more than just a demonstration in support of women’s rights, but a way to channel the interconnectedness of other social issues like immigration rights and racism. Still, Noura said the key to addressing some of these problems is to open a dialog on the issues facing equality and discuss the different ways to challenge them. With the thousands of individuals who took part in Women’s Marches across the world, it would be hard to claim that conversation has not yet been started.