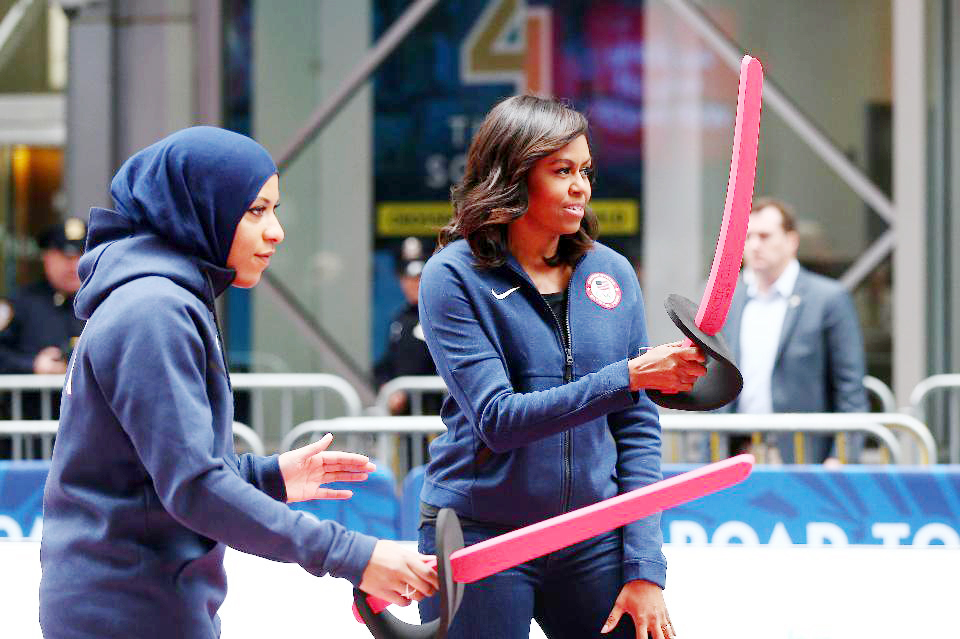 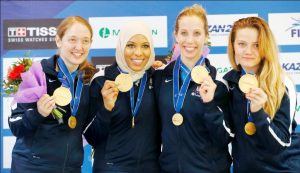 NJ- NEW YORK Ibtihaj Muhammad was told that she’d be giving Michelle Obama a fencing lesson with a giant foam sword when she arrived in Times Square on Wednesday afternoon, the kind of news that might have flustered an athlete unaccustomed to a spotlight so bright.
But Muhammad had not only met Michelle Obama’s other half on more than one occasion, but even had the President introduce her during a speech before telling the cheering audience, “I told her to bring home the gold! Not to put any pressure on you.”
So yeah, moments like this are fast becoming the new reality for Muhammad, a Maplewood native not unlike the dozens of other American athletes who gathered here for the U.S. Olympic Committee’s 100 Days to Rio kickoff event, except for one thing.
She was wearing a hijab.
In 100 days, the country will become engrossed in the travails of Michael Phelps and the latest smiling gymnast as the Olympics essentially become a three-week-long NBC miniseries. Fencing, never viewed as primetime material, likely will find itself buried on the TV schedule.
But you could make a strong argument that there won’t be a more important American athlete in Rio de Janeiro than Muhammad. The pinnacle of her athletic career just happens to coincide with a frightening persecution of Americans who share her beliefs, and she fully embraces that she’ll have a global platform to deliver her message.
Which is this: “America is all that I know. I feel American down to my bones,” she told a small group of reporters. “For anyone to challenge that idea that I’m not American or that I don’t belong, it’s frustrating. I want people to see a Muslim woman in hijab represent the United States this summer.”
She would rather have people focus on her journey in fencing, which itself is fascinating. Muhammad tried volleyball, track, softball and other sports growing up in Essex County, but the constant alterations she had to make to her uniform grew tiresome.
Then her mother caught a glimpse of the fencers — covered, of course, from head to toe in protecting gear — training in the Columbia High cafeteria when her daughter was 13 and encouraged her to give it a try.
“I didn’t find fencing,” she said. “Fencing found me.”
But she understands that, for many, her sport will be irrelevant. Muhammad has become an outspoken voice for Muslim women, be it sharing her views on presidential politics — she blasted Donald Trump in a recent Time magazine profile — or sharing personal experiences on Twitter.
When the check-in desk at the South by Southwest festival in Austin asked to remove her hijab to take a photograph for her identification badge, her refusal (and subsequent social media post) created national news. When a stranger called her “suspicious” and asked if she was going to “blow something up” as she was walking on Seventh Avenue in Manhattan, she tweeted a photo of the man and then added this message: “We’re living in a time where people feel comfortable spewing their hate and harassing the innocent on our streets. We need change”.
“The reason I’m so public about the experiences I’ve had, especially in these last few months, is that I want the public to know this is commonplace and it shouldn’t be,” she said. “We have to change our conversation. We have to be more accepting of our neighbors and try to combat the bigotry that we’re experiencing now. More than anything, I want things to change.”
Can one Olympian make that change? Maybe not, but the image of her competing in a stars-and-stripes hijab at the most patriotic of all events is certainly a powerful image, and hopefully one that will inspire young Muslim women to, as she says, “envision themselves in this space.”
They will see Muhammad not just on a piste in Rio, but on the set of the Today Show or The Ellen DeGeneres Show, or in the pages of Time magazine with the headline “A New Face for Team USA.” So many Olympians use their long-awaited moment in the quadrennial spotlight to pitch products, but she’s using it to get a message out to the world.
It’s a pretty powerful one, too. Let’s end with it.
“I think it’s unfortunate that we’re in this moment, especially during the presidential election where people feel so comfortable voicing their dislike or discontent for people of a particular background or particular religion,” Muhammad said.
“We as Americans have to fight that because it goes against the very values that we stand for. I feel like I’m this position and I have to use it and I have to use it well. I want to reach as many people as I can, not just with my skills in my sport but with my voice.