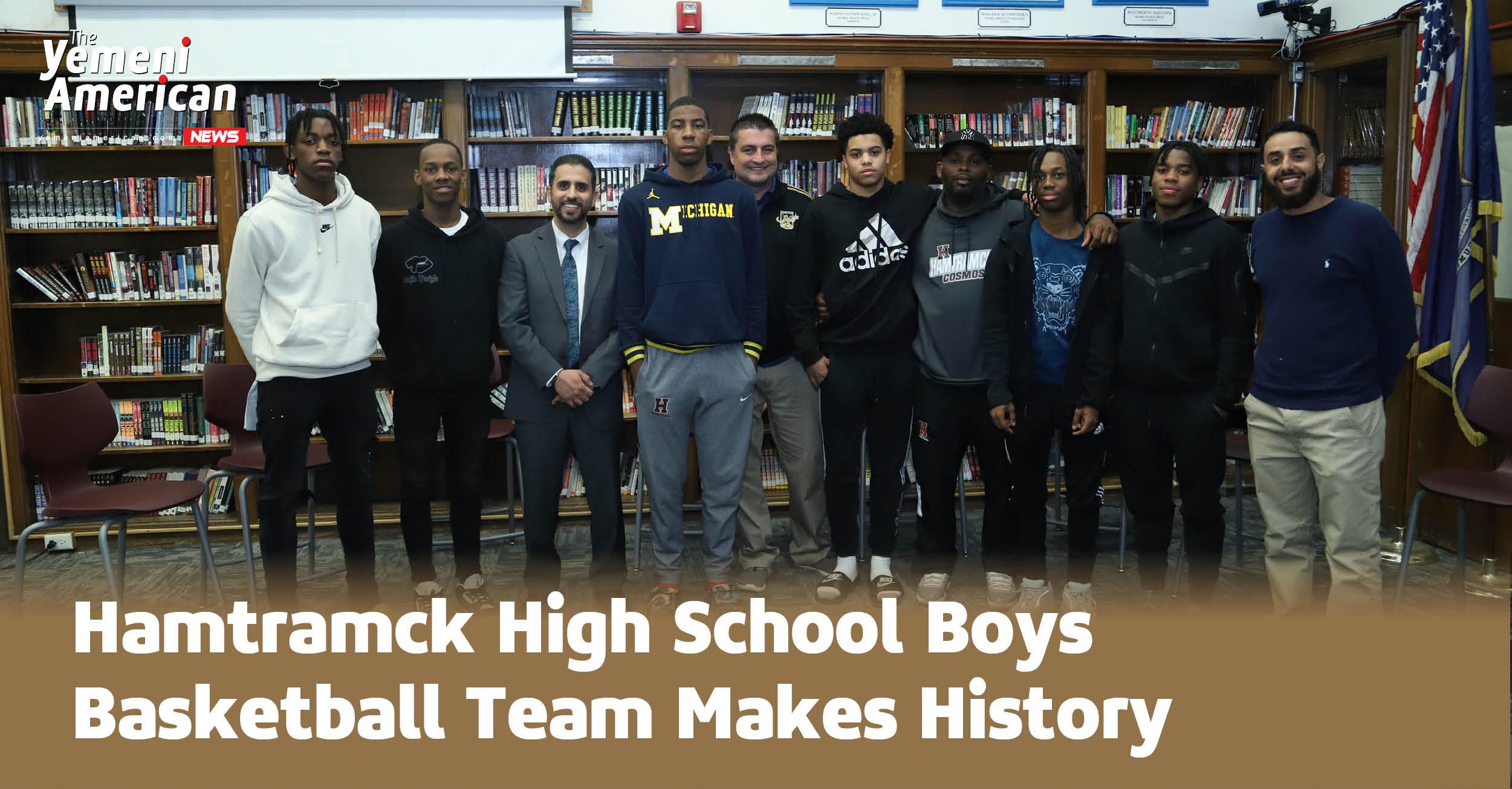 The Hamtramck Cosmos 2021-2022 Varsity Boys Basketball team made history this past season by winning its first district title in over 37 years (since 1985).

The past few years, the boys’ basketball team have been making great strides to achieve their goals. They’ve gone undefeated in conference play the last two seasons. The goal for this season though was to also win the district title, and that goal was achieved.

Head Coach/Assistant Athletic Director Dennis Foster may not want the credit, but it’s hard not to give it to the guy especially after all that he has done for the program since he came in 2017.

Coach Foster has built a coaching staff that is filled with a tight knit group of people who share the same goals. The fans and the community are filling up the stands once again, and the players are playing lights out, all while maintaining a grade point average that will allow them to attend college after they graduate out of high school.

Whoever is in charge deserves the recognition, and that man’s name is Coach Foster.

We at The Yemeni American News though are not the only ones who are recognizing his and the team’s greatness.

Hamtramck Public Schools Interim Superintendent Nabil Nagi, who has been a big supporter of all the sports programs at HPS, said, “Whenever I speak of them [the boys basketball team,] or wherever I am at, I am loud letting people know we got the best team. Don’t let their humbleness fool you, they are beasts on the basketball court.”

Athletic Director Brian Anderson said, “We’re taking a lot of pride from what these guys are doing here. It’s not just the fact they have won a lot of games, because they’ve done a lot of winning in the last 3-4 years. But it’s also all about the way they go about it. They are good kids, good people that you just want to be around.”

Brian Anderson then added, “As for Coach Foster, the job that he does with these guys is unbelievable. We’ve steadily grown every year. My first year here our crowds were kind of light, but now if you come to one of our games it’s a packed house basically every night. There’s also no doubt in my mind we had the hardest schedule in the state this past year. After going 17-3 and making history, we are definitely proud of the end result.”

David Farver, who is the Restorative Room Supervisor and Head Varsity Baseball Coach for Hamtramck High School, has been attending the Cosmos basketball games regularly since he graduated from the school in 1999. He says the change in the boys’ basketball program over the past few years has been “drastic”.

“The student body, faculty and community have all benefited from the growing success of the basketball squad,” Farver said. “It has brought us closer as a school and as a city. I have always worn the block H with confidence, but to be recognized for it in other cities is a whole new feeling. I truly don’t believe these kids understand how they have put the city back on the map in such a short span of time, and it was all due to their hard work.”

The bond the HHS players have with one another and with their coach is similar to a bond of a family. That’s why the players call it a brotherhood. They all love and respect one another, but they also call each other out and hold each other accountable if someone starts to slip up.

Junior Amari Allen, who is a candidate for the Mr. Basketball Award for the state of Michigan next year, said, “Coach Foster pushes me to play great every day. He is a great coach because he is going to get on you if you start to slip up in the classroom or on the court. He always pushes you to be better.”

Sophomore Dontez Winfrey said, “My number one reason I enjoy playing for Coach Foster is because he is like a father to me. We are all in it together. We are all brothers so when we play together we all click and we know what we are going to do.”

Senior Dejai Foster Jr., who is the son of Head Coach Dennis Foster, said the top reason he enjoyed playing for his dad was the fact that everything was “nothing but love”. He then added, “It can be tough love, but it was nothing but love.”

When we asked coach Foster what were his academic expectations for his players, he said, “I know it’s a 2.0 GPA to play high school basketball in Michigan, but we don’t go by those standards. I believe if you are mediocre in the classroom, then you will be mediocre on the floor.”

Coach Foster doesn’t just talk about it, he actually backs up his words with actions.

Three seniors from this past season, Dejai Foster Jr., Aaron Allen and Hershel Marion, all received full ride scholarships to Wayne County Community College because of their grades and their athletic performances.

Those 3 young men will be joining a couple of other former HHS basketball players who currently attend WCCC and got full-ride scholarships after playing for Coach Foster.

So kudos to the coach, players, athletic directors, administration, staff and everyone else at HHS for all of the great work they have put in.

Once again, the staff here at The Yemeni American News want to congratulate the 2021-2022 Hamtramck High School Varsity Boys Basketball Team for winning their district title. Keep up the great work!

For the full interview, check out the Yemeni American News’ Facebook page.