Exclusive Interview with Ron Haddad, Dearborn Police Chief: The crime rate in South End of Dearborn is the lowest 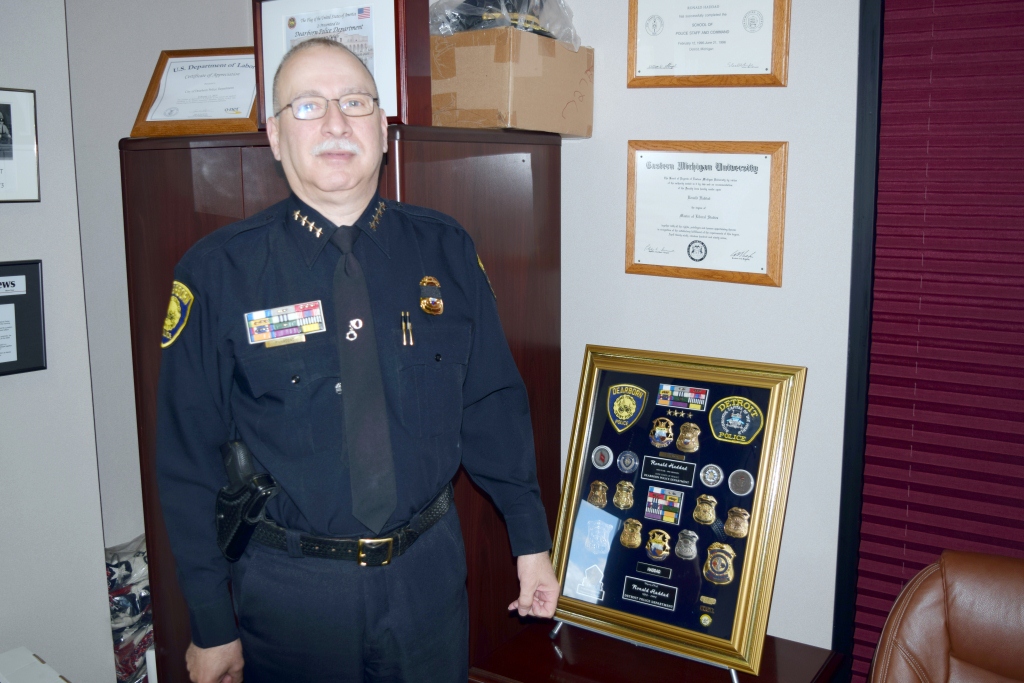 The Yemeni American News had an interview with Ron Haddad, Dearborn Police Chief and these were his answers to the questions asked:

There has been lots of hype about police body cameras lately, will the city of Dearborn follow in the steps of other cities that have adopted body cameras? And what do you think about the idea of body cameras on police?

There has been a big push in our country to put body cameras on all officers. I want to tell you that we have long had video cameras in our cars both in the front and in the back to capture prisoners. Body cameras we’ve already tested here in the city of Dearborn and body cameras catch an essential truth that is needed in our line of work and I support body cams but they are not the total end all because there’s going to be a lot of times when they won’t capture what has occurred. But certainly, we are supportive with technology and we are going to use our body cameras here in the city of Dearborn.

I know there was a recent survey, I’m not going to comment on it, I’ve not seen it. I can tell you that my officers have told me not to look at it. And I want you to know that we have been very fiscally responsible for the whole 8 years that I’ve been here. We’ve come under budget every one of the years.  We have trained our officers to the tune of about 6,000 hours of training per year. Under my tenure I am very proud of the fact that I have hired more people with college degrees than ever in the history of this city. And our crime rate is down by 25% over the last 7 years and I am very proud of the work of the men and women here.  And along the lines of what we do with our labor unions here, there’s binding arbitration, there’s agreements, there’s negotiations and any problems that are internal will remain internal.  But I’m very proud of the men and women here for what they do every day.

I want to say that I am very proud of my hiring efforts here, that we’ve hired the first Arab-American female in the history of the city into our force.  We’ve hired not only the first but we’ve hired three African American women.  And that’s never happened in the City of Dearborn.  We’ve hired many Arabic speaking officers here.  And there have been some reports about some that have left here, but I would suggest to you without getting too personal about it, that they found out this job was not for them.  It wasn’t for any bad reasons. Many times in many professions, people go to law school then they come out and the find out they don’t want to be a lawyer.  People go to Med school and then they come out and find out it’s not what they thought it was going be and they get another profession. And same with law enforcement, there’s no way that you can know the demands of this job until you come onto it.  And there are some people regardless of their ethnicity or race or background, they are not suited for this job or they determine that other jobs are more appealing to them.  And I would suggest to you that people that have left this department prior to retirement fall into those categories.

I think the most prevalent concerns I have today obviously are officer safety because there’s a very angry mood in the country and with the, and I’m not going to blame all of our problems on social media but with the social media somebody can pose a threat, somebody can pose an idea and although we can usually within very short order reach out and touch that person millions of people can read that suggested act of violence and it’s hard to know who’s serious and who’s not, so I’m very concerned about officer safety. But having said that, here in our community we are very supported in the police department. We have a community-policing program that’s been recognized nationally as one of the best in the nation. And our citizens here always give us millages and we have another millage coming up here in August to renew our current millage. And I find that we enjoy a very positive trusting relationship with our community. But in spite of that I still worry about our officer safety, that’s the number one concern for me. I go to be worrying about them and I wake up and check all of my emails and thank God that I didn’t miss anything bad in there so it’s their safety, they’re in harms way. We put them in harms way every single day, we expect them to do the impossible and my big concern is to keep them safe

You know there’s several crimes in Dearborn that the community can help with, #1 domestic violence, if we engage our community, if we become more understanding that domestic violence is unacceptable we can lessen those types of crimes and you lessen them by reporting them when they happen because the always re-occur.  Another crime that we can obviously help out with is you may have seen our “lock it or lose it” campaign. We have 900 crimes a year that happen because people forgot or refused to lock their cars.  In some cases, they are brand new cars, they leave a key in the car. And sometimes we get a report that a car was stolen with 800 miles on it.  And the worst of them report that they left a loaded weapon under the car seat. So, lock your car, hide your valuables and that would make our jobs a lot easier.  And you know, basic reporting suspicious stuff in your neighborhood. 943-30-30 dispatcher answers those calls, they will evaluate what you are telling them and we can send someone out. Be a good neighbor, know your surroundings, if you see someone at your neighbor’s house with a truck and they never mentioned that they were having work done call us and let us check it.  One more thing that citizens can do, don’t ever fall for scams on the phone where people tell you to go and send money to them, somebody locked up in another country.  Just take a step back and make some phone calls, do not fall for scams.

There is an unfortunate trend to paint Arab and Muslim populations with one broad brush related to terrorism and I find that there are two views of Dearborn. The real view that knows it is a modern American city, it’s a diverse city and everyone gets along. Then outside of the city people paint us as terrorist at times. They call me the Taliban police chief, the Sharia police chief. I ignore those kind of things. But you know I feel bad for our community so as much as we can try to paint a positive image of our city.  We don’t miss a chance to do that. We also try to nationally project what type of city we are. I go all over the country and speak about the trusting relationship we have in our community policing model here with the community.  We have lessened the use of force against citizens by 85% since I got here. That is the best in the country and by “use of force” I mean, going hands on with people. People are not getting injured by the police. We are teaching de-escalation measures and we’re teaching citizens to have greater respect for the police so I am very proud of that. If there’s other police chiefs in the country there won’t be many that can stand up in front of people and say, “we’ve reduced the use of force by 85%, we’ve reduced the use of the taser by 95%.  So I know that we are going through hard times now with these two fatal shootings of last year and earlier this year. We’ll get through them but they are just unfortunate events that occurred.  They’ll be fully investigated and we’ll let the chips fall where they may. But I also am confident that we serve our community every day, we provide them with superior service that gains their trust in everything we do, so I’m very proud of the men and women here. And I’m exceedingly proud of our community because we shouldn’t take for granted how they work with the city government and with all the different departments especially police because that does not occur around the country.

You know, recently there’s been some inquiries from the media about covering up a drunk driving case with an individual that happened to be the mayor’s son. I can tell you that those accusations are preposterous. He was treated just like everyone else. There are some people that would have me treat him worse than everyone else and will never be any part of that. I go record as saying, we treated him like everyone else. There were other victims involved so there was a cause not to disclose every little finite part of the case. And the young man went into court and plead guilty.  I simply reject any thoughts that you could cover something like that up.

You’re going to be surprised what I tell you, you know when we talk of crime in the South End for example the incidents of crime are the best in our city. They are the lowest.  Now there are two areas that I think we can focus on, #1 property crime, again if you lock your car, you lock your garage, if you see somebody that looks out of place, call us. The other area that I am not very happy about is there seems to be an increase in drug use. On traffic stops we are catching people with illicit drugs or a large quantity of narcotic pills. And I think that community education and awareness is key. Sometimes young people will be taken to a doctor and pick up pain medicine.  And when those prescriptions run out they find themselves addicted so they have to go out on the street and buy heroin or something else. Those things are very troubling to me. As a society America has a drug problem so we need to be aware of those kind of things. But I’m very proud of the people in the South End because they have the fewest incidents of crime of anywhere of our 8 beats. So congratulations to the people in the South End. But it also gives us an opportunity to do even better. So look out for your neighbors, lock your cars, lock your garages and make sure that if somebody looks out of place, everybody knows everybody in the South End, but if you see late at night, people going down the street, call the police.