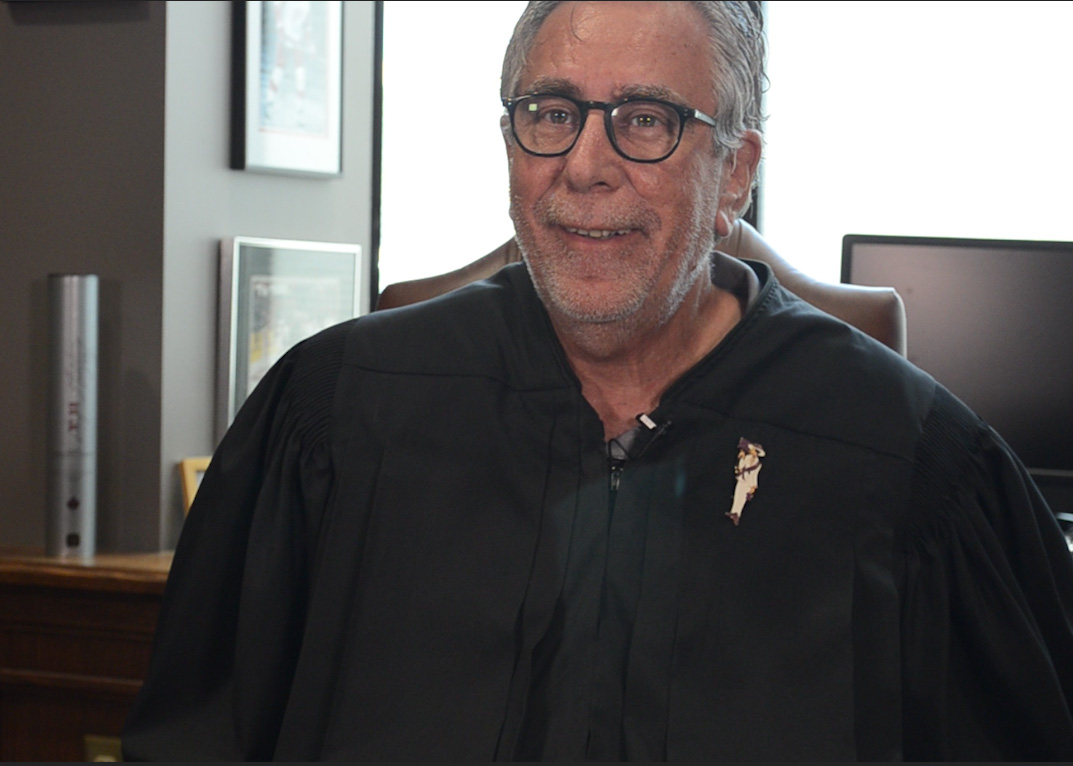 Video and Story by Brian Stone

DEARBORN, Mich. – In his office, adorned with some baseballs signed by Mickey Mantle and photographs of his family, the Honorable Gene Hunt, chief judge of Dearborn’s 19th district court, sat down for an interview with the Yemeni American News.

Tell us a little bit about the 19th district court and what kind of cases show up here?

So now that court’s reopening, what kinds of precautions are you taking to avoid spreading COVID-19?

We’ve not had people coming in until August. Everything’s being done virtually. We’re taking it safe. Everyone who comes through is going to have temperature taken, they’re going to fill out a form to see if they’ve traveled, been sick or been around someone who’s been sick. We have hand sanitizer throughout the courthouse, we have social distancing rules in place, and when someone comes in they will have a designated place to sit.

People who are here in for court dates, we have the technology to have them wait in their car. So, once their case is ready, we would send them a text and they’d then come in and be screened to come in here. Everyone, once we come in the doors, is going to be required to wear a face mask.

What are your thoughts on the Zoom court session? How do you feel it’s going in general?

It, in my opinion, jump-started the future. I think the future is going this way, where a lot of courts are going to handle their hearings by video conferencing, Zoom or something else. I think it’s a very good idea. There are many kinds of court dates that are brief, and people come here and wait all day for their case to be called and come up. When it’s done by video, they can be in their house, be at work, be wherever they have to be, and then they just have to be on the video for a very short period of time.

When it comes to trials, evidentiary hearings, preliminary examinations, where you have witnesses that are sworn in and testify, it’s important that they are live, so you can see their demeanor, and look at their credibility a lot better than if it was by video conferencing. We’re not going to have jury trials for a while – the circuit court won’t have jury trials until at least October. We’ll follow their lead – we don’t want to expose anyone to COVID-19 period.

How do you feel about taking COVID into consideration when making bond decisions?

I take COVID into consideration on all my bond conditions. Most of my bonds are all personal bonds. They’re misdemeanor cases that are here. We have the ability to have an alcohol tether on somebody who I feel needs to be monitored for alcohol, we can put a GPS tether on someone to monitor where they’re going to go and make sure they come back.

The only time that I make a cash bond, and sometimes, most of the time I’ll make it with a GPS tether as well, is if I think someone is in danger if the person that has been accused is out on bond.

What is something that you wish you could tell people before they end up in a situation where they have to show up in front of your court?

One thing that really concerns me… people will gets tickets and, unfortunately, can’t pay them or don’t pay them and their license gets suspended and then they snowball out of control that they can never recover. That would be probably about 5% of the people who come before me on driving with a suspended license. The other 95% can take care of the problem that they have and can stop the snowball where they’re paying courts all of their money that they could be putting toward their family, their house, car, car insurance, food and all that. So that really concerns me.

I’ve been doing a lot over here. I set up a veterans court and sobriety hybrid court and those are kicking into gear pretty good. We have funding from the state and funding from the federal government on the veterans court, and funding from the state on the sobriety court. One thing that’s in the works is that I want to dedicate a probation officer strictly to the traffic tickets, the traffic misdemeanors like driving on a suspended license, so that when somebody comes through here, they’ll go to this probation officer who is an expert on how to go about getting their license back and keeping an eye on them to make payments to other courts and our court and get their license back and quit paying courts all their money.

What do you want the public to know about who you are as a judge and as a person?

Well I have been a resident of Dearborn virtually my whole life. I know a lot of people here. I am, I think, compassionate. I listen. To be a good judge, you don’t want to be someone who talks all the time, you want to be someone who listens. You want to not be focusing on punishing people, but focusing on solving the problem that brought them here in the first place.

The veterans court that I have going – that’s the focus there: to get them housing, jobs, treatment, medical benefits; and it’s the same thing with the sobriety court. They’re both, so far, extremely successful. A lot more successful than what I thought they’d be when I started them.

We take things very seriously over here. We focus our attention on serving the public. I think we have a great workforce here. We have an exceptional probation department. Our court administrators are top notch. We have a good relationship with the police department. We have a good relationship with the city. Everything is going good over here. I know there have been problems here in the past, but those problems don’t exist anymore. We’re doing good.