Detroit, Dearborn and Hamtramck Left out of Shrinking COVID Numbers: COVID-19 Update for Week of Sept. 13. 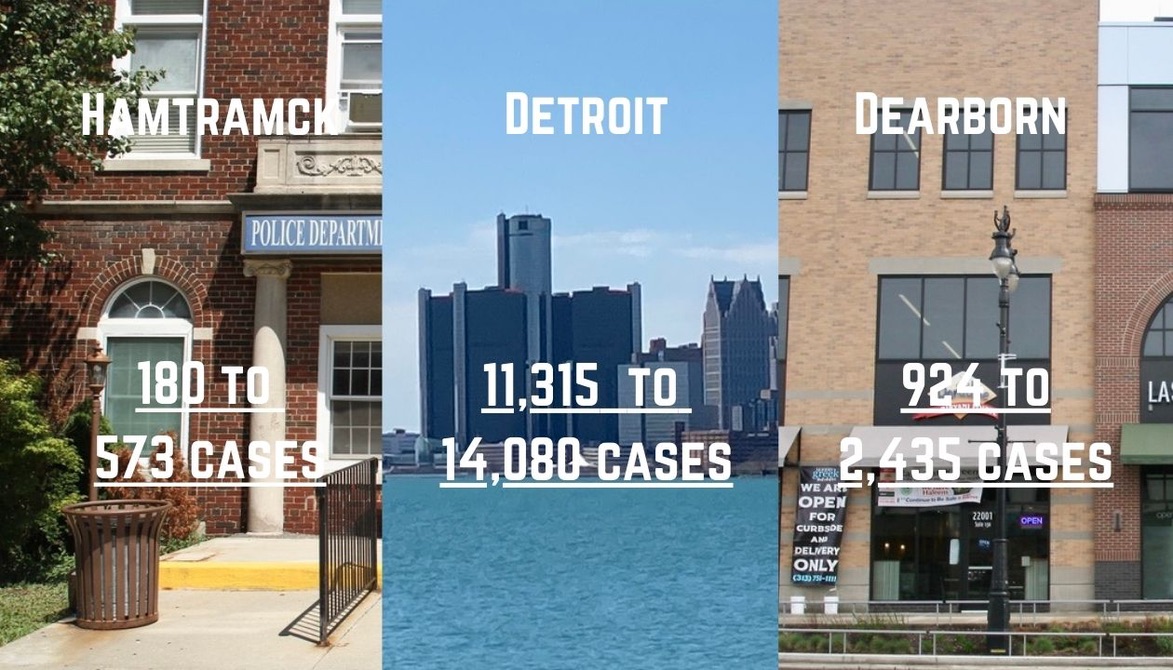 In the Yemeni American News’ previous COVID-19 update on June 7, the total number of COVID-19 Cases for Wayne County was at 21,091. Throughout the past few months, the numbers have rapidly receded to 17,551 current cases. This is a promising sign for many of the communities throughout Wayne County, but it’s not a cause for celebration in every city.

Detroit, Dearborn and Hamtramck have seen their numbers grow while the majority of Wayne County is seeing a steady decline in their case numbers, as compared to June 7.

“We’re not there, Hamtramck,” said Hamtramck Mayor Karen Majewski in a weekly statement to the city. “It just underscores why we had to forego the [labor day] festival this year, and why we still have to make sacrifices and be extra careful. I know that’s going to be difficult… I mean we all know what we have to do, right? We’re not out of the woods yet.”

Michigan Governor Gretchen Whitmer announced last Thursday a plan to repay frontline workers for their services during the height of the Pandemic. The program, known as Futures for Frontliners, is working under a similar framework to the GI Bill, providing frontline workers tuition aid for higher education.

The program is open to anyone who provided an essential service during the height of Michigan’s response to the Coronavirus Pandemic. It’s required that those who apply must not have already received a Bachelor’s degree, and that they are not in default on federal student loans.

“This initiative is Michigan’s way of expressing gratitude to essential workers for protecting public health and keeping our state running,” Whitmer said in a statement to the Detroit Free Press. “Whether it was stocking shelves, delivering supplies, picking up trash, manufacturing PPE or providing medical care, you were there for us. Now this is your chance to pursue the degree or training you’ve been dreaming about to help you and your own family succeed.”

You can find a link to the application here.

In an interview with CBS News, the CEO of Pfizer pharmaceutical corporation, Dr. Albert Bourla, said that his team of scientists will know whether their vaccine will be viable by the end of next month. Dr. Bourla says that the vaccine most likely won’t have a mass-distribution before the end of 2020.

The vaccine that Pfizer is researching has reached the final stages of human trials. Right now, Pfizer has tens of thousands of subjects testing the efficacy of the vaccine, however Pfizer is looking to expand the body of subjects in order to understand how the vaccine affects people with various underlying medical conditions such as people who are HIV+ and other compromises to people’s immunity.

The biggest challenge to making the vaccine widely available is the distribution. Because of the challenges with the supply chain, Dr. Bourla says that the distribution will go through targeted stages, with frontline workers likely to receive the vaccine before most other members of the public.

The Federal Government has been providing a large portion of the funding necessary to research the efficacy of vaccines. Although this was provided in order to allow pharmaceutical companies to absorb whatever financial challenges, Pfizer is the only company that refused the funding. Dr. Bourla explained that this is in order to allow his scientists to avoid working under the political challenges of this time.

Democratic Nominee for President Joe Biden has been leveraging what many in the country see as a failed response to the Coronavirus crisis for his presidential campaign. Using the president’s delayed response as an argument that he is not fit to run the economy, Joe Biden has started to chip away at an issue that many voters trusted in Trump over him.

A recent poll shows that 48% of likely voters trust Biden more than Trump with the economy, as compared to 49% trusting Trump more. “It is a stark difference from an earlier CNN poll which showed Trump leading Biden 53% to 45%,” writes Amie Parnes for The Hill.

Biden has also detailed a complete Coronavirus response plan for the possibility that he is sworn into office, starting with what the Washington Post calls a “war-cabinet-in-waiting.” One of the biggest challenges that experts warn about is a disastrous disinformation campaign that has fractured the possibility of a unified response to the Coronavirus Crisis, saying that Trump himself has complicated any possible efforts.

In a book written by acclaimed journalist Bob Woodward, the President admitted to downplaying the severity of the Coronavirus Pandemic in order to avoid creating a panic in the country. It’s reported that in their last conversation, President Trump asked Woodward if the book will take a favorable view of his presidency. Woodward replied that it will be a tough book. A few hours later, Trump tweeted his criticism over Woodward’s reporting.